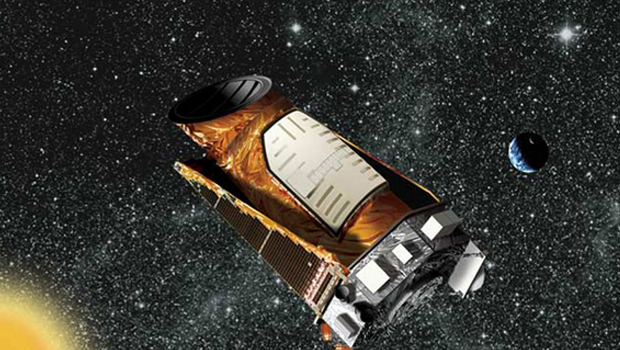 After exhaustive tests and analysis, engineers have concluded NASA's hugely successful Kepler space telescope will no longer be able to search for Earth-size planets orbiting distant suns because of trouble with the spacecraft's gyroscopic stabilization system, officials said Thursday.

NASA managers are evaluating alternative mission scenarios for the otherwise healthy observatory, including less exacting searches for asteroids, comets and supernovas, and possibly using the probe to search for planets using a different technique.

It is not yet clear whether any such alternative missions might be practical or whether NASA's increasingly constrained budget can support a re-purposed spacecraft in competition with other higher-priority missions.

But even so, Kepler principal investigator William Borucki told reporters Thursday that his project is far from over. The observatory completed its primary mission before the reaction wheel problem and researchers have two years of data in hand that have not yet been analyzed.

"The Kepler mission has been spectacularly successful," Borucki said. "In the beginning of the mission, no one knew whether Earth-sized planets were abundant or rare in our galaxy. Now, with the completion of the Kepler observations, we know our galaxy is filled to the brim with planets."

When the $591 million mission was first planned, he said, "it was sort of like I was standing out in this desert with no knowledge of other planets. Now, it's sort of like standing at the bottom of the ocean and I'm covered with an ocean full of data."

Once researchers have time to sift through the collected data from the full four years of Kepler operations, Borucki said "we expect hundreds, maybe thousands of new planet discoveries."

Said Paul Hertz, director of astrophysics at NASA headquarters: "This is not the last you'll hear of Kepler. There's a huge amount of data collected that we'll continue to analyze. ... I'm confident Kepler's most exciting science results are yet to be announced."

Trailing the Earth in its orbit around the sun, the Kepler spacecraft aimed its 95-megapixel camera at a patch of sky the size of an out-stretched hand that contains more than 4.5 million detectable stars. Kepler actively monitored the light of about 100,000 of those suns.

The spacecraft's camera acted as a photometer, charting the brightness of candidate stars in its wide field of view and the slight dimming that resulted if planets happened to pass in front.

By studying subtle changes in brightness from such planetary transits -- comparable to watching a flea creep across a car's headlight at night -- and the timing of repeated cycles, computer analysis could find the traces of orbiting planets.

Large planets in close orbit around their stars were relatively easy to find. But to confirm Earth-like worlds in habitable zone orbits where water can exist as a liquid, Kepler needed to make repeated observations over three to four years, or orbits.

As of January 2013, data collected during the first half of Kepler's mission confirmed 135 so-called exoplanets out of more than 3,500 candidates. Another two years worth of observations is awaiting analysis.

To make those observations, Kepler had to be kept precisely aimed and locked on target, using three of four spinning reaction wheels to maintain the required stability.

But one of the wheels failed in July 2012 and a second wheel experienced problems this past May. Engineers carried out tests to characterize the problem and to determine if anything could be done to recover the lost wheel. They concluded last week that normal three-wheel operations were no longer possible.

The team now is studying the engineering feasibility of alternative missions, using two reaction wheels and the spacecraft's thrusters for aiming and stability. Depending on the results, NASA managers will have to decide whether the science that might be possible justifies the cost of a repurposed mission.

NASA plans to host a second Kepler Science Conference in November to share and discuss the data analyzed to date. A follow-on planet hunter, the Transiting Exoplanet Survey Satellite, or TESS, is scheduled for launch in the 2017-18 timeframe. It will use the transit technique to look for planets around stars closer to Earth.

"Kepler has made extraordinary discoveries in finding exoplanets including several super-Earths in the habitable zone," John Grunsfeld, NASA's science director, said in a statement.

"Knowing that Kepler has successfully collected all the data from its prime mission, I am confident that more amazing discoveries are on the horizon."