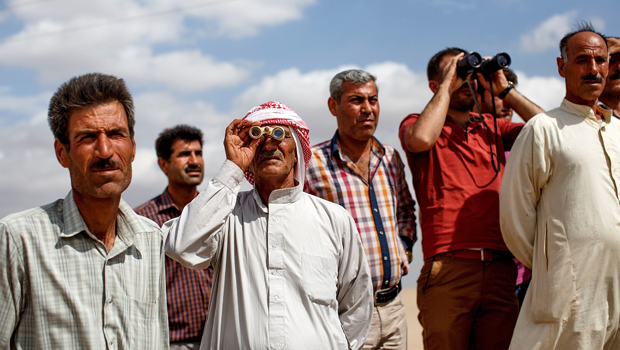 BEIRUT -- U.S.-led coalition warplanes struck fighters with the Islamic State of Iraq and Syria, or ISIS, in Syria attacking a town near the Turkish border for the first time, as well as positions in the country's east, U.S. Central Command said Saturday.

Fighter jets and drones conducted a total of seven airstrikes in Syria Friday and Saturday, Central Command said. Jordan, Saudi Arabia and the United Arab Emirates participated in the strikes with the U.S. Air Force and the U.S. Navy.

ISIS' assault on the Syrian Kurdish town of Kobani has sent more than 100,000 refugees streaming across the border into Turkey in recent days as Kurdish forces from Iraq and Turkey have raced to the front lines to defend the town.

CBS News national security correspondent David Martin reports that the strike near Kobani was intended to take some of the pressure off of the town.

The United States and five Arab allies launched an aerial campaign against ISIS fighters in Syria early Tuesday with the aim of rolling back and ultimately crushing the extremist group, which has created a proto-state spanning the Syria-Iraq border. Along the way, the militants have massacred captured Syrian and Iraqi troops, terrorized minorities in both countries and beheaded two American journalists and a British aid worker.

The latest airstrikes came as Syria's Foreign Minister Walid al-Moallem told the Lebanon-based Al-Mayadeen TV that airstrikes alone "will not be able wipe out" ISIS. Speaking from New York where he is attending the U.N. General Assembly, al-Moallem said in remarks broadcast Saturday that the U.S. should work with Damascus if it wants to win the war.

"They must know the importance of coordination with the people of this country because they know what goes on there," al-Moallem said. The U.S. has ruled out any coordination with President Bashar Assad's government, which is at war with ISIS as well as Western-backed rebels.

The Britain-based Syrian Observatory for Human Rights said the coalition's strikes near Kobani came amid heavy fighting between ISIS and members of the Kurdish force known as the People's Protection Units, or YPK.

The Britain-based group, which relies on activists inside Syria, had no immediate word on casualties from Saturday's strikes. The Observatory reported Friday that 13 civilians have been killed by the strikes since they began.

Kurdish fighter Majid Goran told The Associated Press by telephone from Kobani that two bombs were dropped over the nearby village of Ali Shar, at 6 a.m., but that the positions they struck were empty.

Turkey's Dogan news agency reported Saturday that the sound of heavy fighting could be heard from the Turkish border village of Karaca. The agency said Kurdish forces retook some positions they had lost to the Islamic militants a few days ago. It did not cite a source for the report.

Dozens of people wounded in the fighting arrived in Turkey for treatment on Saturday, it said.

He said that on Friday, the Islamic militants were attacking the Kobani area from the east with tanks and artillery, advancing on Ali Shar and Haja. He said some 20 people were killed, including Kurdish fighters and civilians, while another 50 people were wounded.

The fighting around Kobani sparked one of the largest single outflows of refugees since Syria's conflict began more than three years ago. The Syrian Kurdish forces have long been one of the most effective fighting units battling ISIS, but the tide has turned in recent weeks as the Islamic militants have attacked with heavy weapons likely looted from neighboring Iraq.

The Observatory said other coalition airstrikes targeted ISIS compounds in the central province of Homs and the northern regions of Raqqa and Aleppo. The group said 31 explosions were heard in the city of Raqqa, the group's de facto capital, and its suburbs.

The Local Coordination Committees, another activist group, said the strikes in the east hit the province of Deir el-Zour as well as Raqqa. The LCC also said the coalition targeted grain silos west of Deir el-Zour city.

It was not immediately clear why the silos were targeted.

Max Blumenfeld, a spokesman for U.S. Central Command, said the U.S. airstrikes "don't target food or anything else than can be used by the civilian population." But he said that until the military reviews images from planes that participated in the strikes, he could not rule out that silos were hit.

He said the airstrikes are aimed at specific ISIS targets such as command and control centers, transportation and logistics, and oil refineries, "but not food that could have an impact upon the civilian population."

"Our targets are structures that combatants would use," he said.

Blumenfeld later said the U.S. did target what he called an ISIS grain storage facility on Tuesday near Boukamal, a town close to the Iraqi border which was seized by ISIS earlier this year.

In recent days coalition warplanes had struck oil-producing facilities in eastern Syria in a bid to cut off one of ISIS' main revenue streams - black market oil sales that the U.S. says generate up to $2 million a day.

The coalition striking Syria includes Saudi Arabia, the United Arab Emirates, Qatar, Bahrain and Jordan, and the strikes are an extension of the U.S. campaign in neighboring Iraq launched in August.

Near the capital Damascus, Syrian troops meanwhile entered the once rebel-held northeastern suburb of Adra after days of clashes, Syrian state TV said. The advance came two days after troops captured the nearby Adra industrial zone.