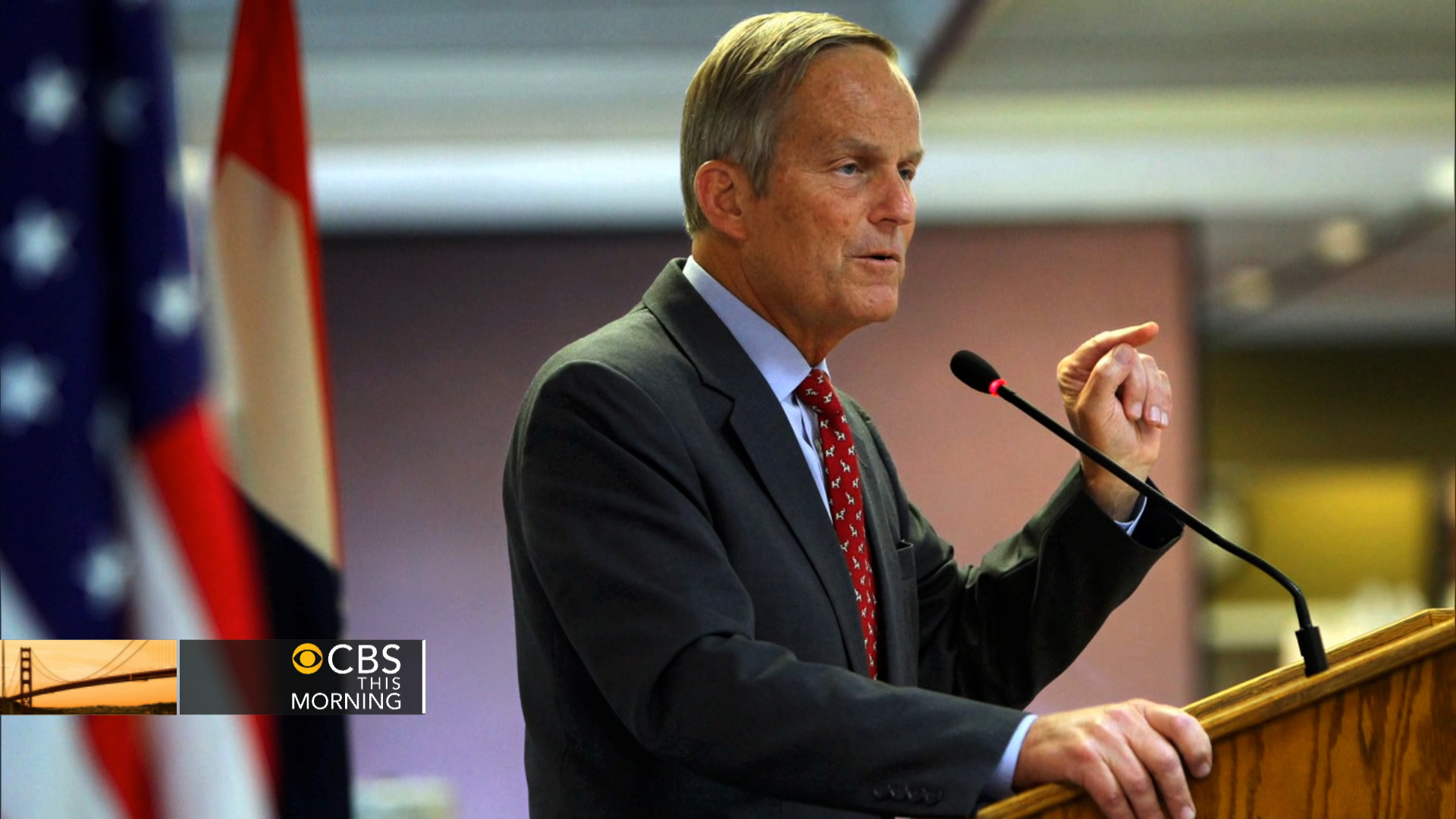 (CBS News) Republican Rep. Todd Akin on Monday apologized for the controversial remarks he made over the weekend about abortion and rape, but he said he has no plans to drop out of the Missouri Senate race despite building pressure from within the GOP.

"What I said was ill-conceived, and it was wrong," Akin said on former Arkansas Gov. Mike Huckabee's radio show Monday. "I really just want to apologize to those that I've hurt."

Akin's apology came as President Obama suggested the Republican's remarks illustrated the broad differences between Democrats and Republicans on issues like health care and reproductive rights.

Mr. Obama added that Akin's remarks underscore "why we shouldn't have a bunch of politicians, a majority of whom are men, making health care decisions on behalf of women."

The president acknowledged that his GOP rival Mitt Romney and other Republicans have distanced themselves from Akin's statements. However, he said, "The underlying notion that we should be making decisions on behalf of women for their health care decisions, or qualifying 'forcible rape' versus 'non-forcible rape' -- those are broader issues....between me and the other party."

The controversy started after Akin, a six-term Missouri conservative now running against Democratic Sen. Claire McCaskill, was asked in a local interview on Sunday whether he would support abortions for women who have been raped.

"It seems to me first of all, from what I understand from doctors, that's really rare," Akin said in the interview. "If it's a legitimate rape, the female body has ways to try to shut that whole thing down," Akin said of a rape victim's chances of becoming pregnant.

Romney called the remarks "inexcusable," while some Republican senators like Scott Brown of Massachusetts and Ron Johnson of Wisconsin called for him to drop out of the Senate race.

Some liberals tried to tie other Republicans to Akin's comments, noting that Romney's running mate, Rep. Paul Ryan, co-sponsored an abortion-related bill with Akin that would have limited federal funding for abortions to victims of forcible rape," rather than just rape. The FBI's definition of rape is known as "forcible rape," and it is used to distinguish between statutory rape and other kinds of rape.

Huckabee asked Akin whether he was talking about "forcible rape" when he used the term "legitimate rape."

"I was talking about forcible rape, and it was absolutely the wrong word," Akin said.

Akin said he understands that women can become pregnant from rape. "I didn't mean to imply that wasn't the case," he said. "That does happen."

While Akin acknowledged he made a "very, very serious error," he added that he's not dropping out of the Senate race.

"I don't know that I'm the only person in public office who suffered from foot-in-mouth disease," he said. "I feel just as strongly as ever that my background and ability will be a big asset in replacing Claire McCaskill... Just because someone makes a mistake doesn't make them useless."

Later in the day, Akin wrote on Twitter, "I am in this race to win. We need a conservative Senate." His Twitter message also included a link to his fundraising page.

As the Washington Post notes, the Republican Party can't force Akin to drop out of the race, but he could voluntarily resign by 5 p.m. Tuesday, or he could withdraw from the race by court order by Sept. 25.

In spite of Akin's insistence that he'll stay in the race, the pressure Monday continued to build against him. The National Republican Senatorial Committee (NRSC) told Akin Monday it would no longer financially support his Senate bid if he chose to stay in the race, a GOP source told CBS News.

Sen. John Cornyn of Texas, chairman of the NRSC, said in a public statement that Akin's comments were "wrong, offensive, and indefensible," though he stopped short of explicitly calling on him to exit the race.

"I recognize that this is a difficult time for him, but over the next twenty-four hours, Congressman Akin should carefully consider what is best for him, his family, the Republican Party, and the values that he cares about and has fought for throughout his career in public service," Cornyn said.

Meanwhile, the Karl Rove-backed super PAC American Crossroads confirmed to CBS News that it is pulling its ads from Missouri. "The act speaks for itself," Crossroads said to CBS regarding its decision to pull its ads.

The editors of the conservative magazine the National Review wrote Monday that it was time for Akin to step aside.

"What he said is just flat wrong in addition to being wildly offensive to any victim of sexual abuse," McConnell said in a statement. "Although Representative Akin has apologized, I believe he should take time with his family to consider whether this statement will prevent him from effectively representing our party in this critical election."