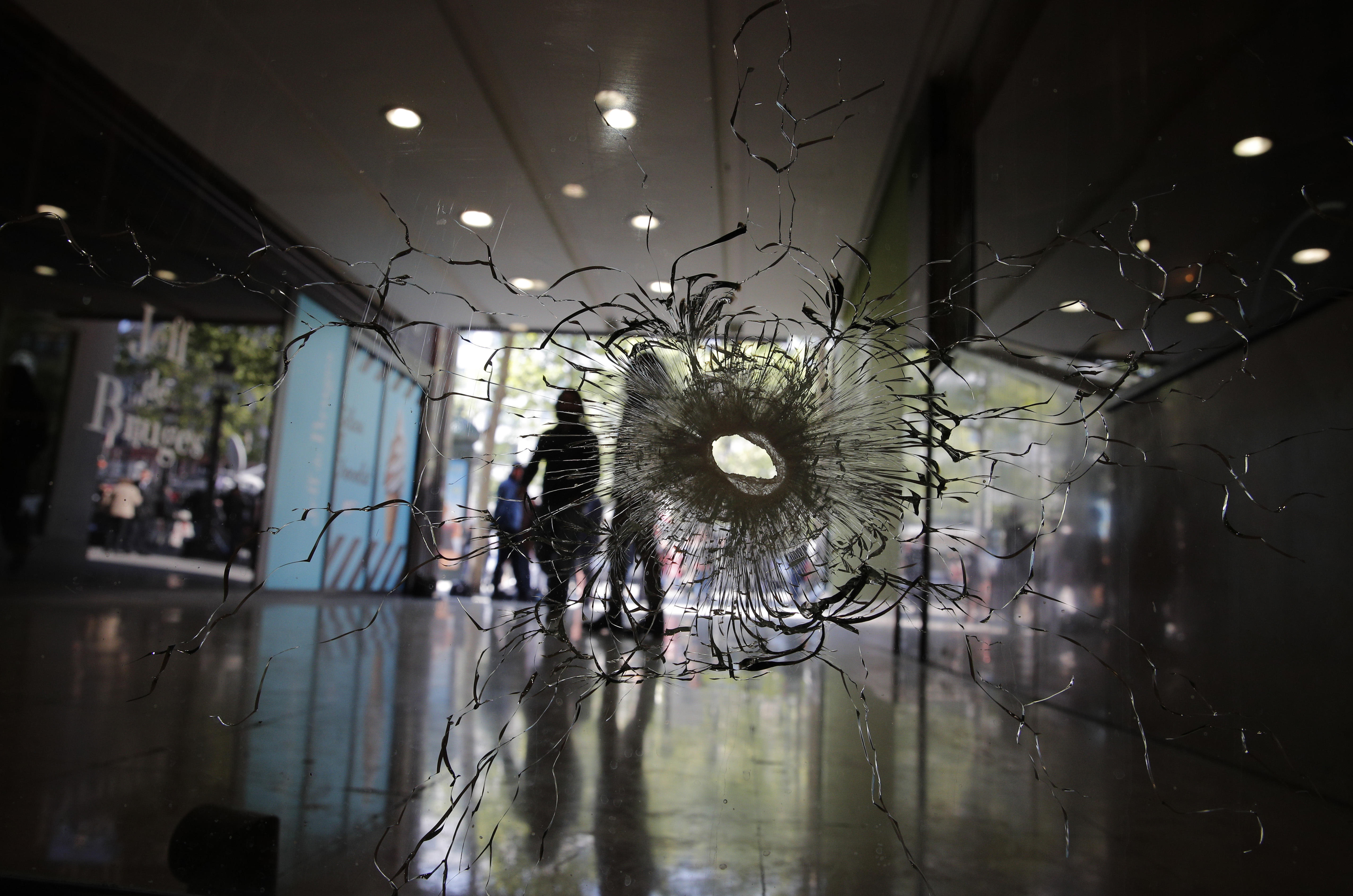 PARIS -- The Champs-Elysees gunman who shot and killed a police officer just days before France’s presidential election was detained in February for threatening police but then freed, officials said on Friday. He was also convicted in 2003 of attempted homicide in the shootings of two police officers, CBS News correspondent Elizabeth Palmer reports.

The French government pulled out all the stops to protect Sunday’s vote as the attack deepened France’s political divide.

“Nothing must hamper this democratic moment, essential for our country,” Prime Minister Bernard Cazeneuve said after a high-level meeting Friday that reviewed the government’s already heightened security plans for the two-round vote that begins Sunday.

“Barbarity and cowardice struck Paris last night,” the prime minister said, appealing for national unity and for people “not to succumb to fear.”

Investigators believe at this stage that the gunman, 39-year-old Frenchman Karim Cheurfi, was alone in killing a police officer and wounding two others and a German tourist on Thursday night, less than 72 hours before the polls open, a French official who discussed details of the investigation with the Associated Press said on condition of anonymity.

The official and another, also speaking on condition of anonymity, said Cheurfi was detained toward the end of February after speaking threateningly about police but was then released for lack of evidence.

The Islamic State of Syria and Iraq (ISIS) group claimed responsibility for Thursday’s attack unusually quickly in a statement that sowed confusion by apparently misidentifying the gunman. However, French media reported that a letter was found near the gunman’s body which defended ISIS, Palmer reports.

Police shot and killed Cheurfi after he opened fire on a police van on Paris’ most famous boulevard. Investigators found a pump-action shotgun and knives in his car. Cheurfi’s identity was confirmed from his fingerprints.

One of the key questions was how the attack might impact French voters.

The risk for the main presidential candidates is misjudging the public mood by making an ill-perceived gesture or comment. With polling so close, and campaigning banned starting Friday at midnight, they would have no time to recover before voters cast ballots.

The attack brought back the recurrent campaign theme of France’s fight against Islamic extremism, one of the mainstays of the anti-immigration platform of far-right leader Marine Le Pen and also, to a lesser extent, of Fillon, a former prime minister. In the wake of the assault, they redoubled appeals for a firmer hand against Islamic extremism and promised get-tough measures if elected.

After Le Pen spoke scathingly Friday of the government’s fight against extremism, Cazeneuve said Le Pen’s party in 2014 voted against an anti-terrorism law and, in 2015, against a law that beefed up resources for French intelligence services.

He said: “She seems to be deliberately forgetting everything that has been done over five years to make people forget that she opposed everything, without ever proposing anything serious or credible.”

Fillon separately pledged to maintain the state of emergency that has been in place since ISIS-claimed gun and bomb attacks killed 130 people in Paris in November 2015.

“The fight for the French people’s freedom and security will be mine. This must be the priority,” he said.

As Paris got back to business, municipal workers in white hygiene suits were out before dawn to wash down the sidewalk where the assault took place - a scene now depressingly familiar after multiple attacks that have killed more than 230 people in France over two years. Delivery trucks did their early morning rounds. Everything would have seemed normal if not for a row of TV trucks parked along the boulevard that is a must-visit for tourists.

Asked if the assault would impact voting, the centrist Macron said: “No one knows.”

With some voters doubtful whether the 39-year-old former banker is experienced enough to be head of state, Macron appealed for cool heads.

“What our attackers want is death, symbolism, to sow panic (and) to disturb a democratic process, which is the presidential election,” he said.

Macron said he canceled campaign stops out of a sense of “decency” and to allow police to concentrate their resources on the attack investigation.

Said by polls to be running neck-and-neck with Le Pen, he tore into her claims that previous attacks wouldn’t have happened under her watch.

“She won’t be able to protect our citizens,” Macron said of Le Pen.

The two police officers injured in the attack are out of danger, Interior Ministry spokesman Pierre-Henry Brandet said. National police spokesman Jerome Bonet, also speaking on BFM television, said there were thousands of people on Paris’ iconic boulevard when the gunman opened fire and that the rapid response of officers who shot and killed him avoided possible “carnage.”

Voters also wondered how the latest attack might impact the election.

Elena Worms, walking her dog near the Champs-Elysees, called the attack “destabilizing” and said she fears it will “push people to the extremes.” She said her plans to vote Fillon remained unchanged.

“He wants to lead Muslims away from fundamentalism to security,” she said.

In a statement from its Amaq news agency, ISIS group gave a pseudonym for the shooter, Abu Yusuf al-Beljiki, indicating he was Belgian or had lived in Belgium. But Belgium’s interior minister said the pseudonym did not belong to the attacker.

Investigators searched a home early Friday in an eastern suburb of Paris believed linked to the attack and police detained for questioning three of the gunman’s family members - routine in such cases.

The attack appeared to fit a spreading pattern of European extremists targeting security forces and symbols of state to discredit, take vengeance or destabilize society. It recalled two recent attacks on soldiers providing security at prominent locations around Paris: one at the Louvre museum in February and one at Orly airport last month.