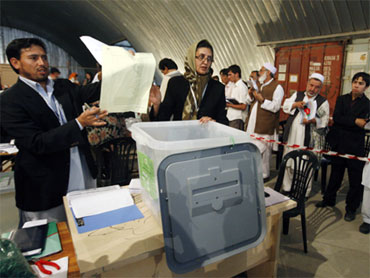 Election workers began recounting ballots from the disputed Aug. 20 presidential election Monday, and a senior official said he expected to announce late next week whether President Hamid Karzai had won or would face a runoff with his main rival.

A U.N.-backed commission ordered a partial recount from about 10 percent of the country's polling stations after allegations of widespread fraud in the vote, which was supposed to install a legitimate government to confront the growing Taliban threat.

However, vote-rigging allegations have plunged Afghanistan into an electoral crisis at a time when Taliban militants are expanding from their southern strongholds into the north and west of the country.

In a sign of the growing threat, hundreds of militants launched fierce attacks Saturday against two isolated outposts in Nuristan province, .

Afghan officials said U.S. and Afghan forces had sealed off an area Monday where the assailants were believed hiding.

In Kabul, election officials said the recount began Monday morning with ballots from 274 of the country's 3,498 polling stations. Ballots from about 84 more locations were expected shortly, according to the deputy director of the election commission, Zekria Barakzai.

Barakzai said the count should take about three days to complete and that the commission would be able to announce the final results "by the end of next week."

Coming up on the "CBS Evening News": Afghanistan: The Road Ahead, a 3-part, in-depth examination of the escalating conflict, airing Oct. 5-7, 6:30 p.m. ET.

showed Karzai won the August balloting with 54.6 percent, enough to avoid a runoff with second place finisher Abdullah Abdullah. A recount could push down Karzai's numbers down below the 50 percent mark and force a runoff with Abdullah, a former foreign minister.

If a runoff were required, Barakzai said it must be held within two to three weeks of the announcement of the final results. Winter snows typically start in mid-November, making much of the country impassable.

Waiting for spring to hold the poll could create a power vacuum in a country already destabilized by the resurgent Taliban and delay both government projects and military operations.

Bolstering Afghanistan's weak and corruption-ridden government is considered key to President Barack Obama's strategy for curbing the Taliban insurgency so that U.S. and other international troops can go home.

However, fraud allegations threatened to undermine those plans at a time when the Taliban was proving to be a skillful and determined adversary.

The Obama administration is also divided over a request by the top military commander here, Gen. Stanley McChrystal, to send up to 40,000 more U.S. soldiers to Afghanistan. President Obama is considering a range of ideas for changing course in Afghanistan, including scaling back, staying put or sending more troops to fight the insurgency.

U.S. officials also are waiting for the results of the Afghan elections, as disturbing reports of fraud grow.

As the debate rages in Washington, the NATO command reported that two more international soldiers, including one American, were killed in recent fighting. A statement from the alliance said a U.S. soldier died of wounds suffered in a bombing Sunday in southern Afghanistan.

The statement said a second service member died of wounds in a roadside bombing Monday, also in the south, but the victim's nationality was not released.

At least 16 U.S. service members have been killed in Afghanistan so far this month - matching the American death toll for all of October in 2008.

The latest deaths followed the fierce weekend assault against the Nuristan outposts, located about 20 miles from the border with Pakistan. About 20 Afghan security troopers were captured, officials said.

Nuristan Gov. Jamaludin Badar told The Associated Press that U.S. and Afghan forces had surrounded the assailants but there was no major fighting Monday.

The Taliban claimed responsibility for the attack. NATO spokesman Brig. Gen. Eric Tremblay said the assailants included a mix of "tribal militias," Taliban and fighters loyal to Sirajuddin Haqqani, an al Qaeda-linked militant based in sanctuaries in the tribal areas of Pakistan near the Afghan border.

McChrystal had planned to shift U.S. troops away from remote outposts that are difficult to defend and move them into more heavily populated areas as part of his new strategy to focus on protecting Afghan civilians.

said Monday he has no second-thoughts about assertions that the organization failed to aggressively probe vote fraud charges in the August presidential election.

"The flaw that took place in Afghanistan was preventable," the dismissed diplomat, Peter Galbraith, said Monday on ABC television.

Galbraith said the United Nations "did not exercise its responsiblity." In dismissing Galbraith, the deputy envoy at the U.N. mission there, Secretary-General Ki-moon did not specify the nature of their differences.

Galbraith said the argument was over how the U.N. should have handled the delicate situation.

Preliminary results from the Aug. 20 election show President Hamid Karzai won a majority, with former foreign minister Abdullah Abdullah in second place. But proclamation of a winner has been delayed pending a partial recount by the U.N.-backed Electoral Complaints Commission (ECC).

Interviewed following the deadliest attack on American troops in a year, Galbraith said he doesn't think this is the right time to bring on an Iraq-like surge in the war-torn country.

"It makes no sense to ramp up," he said. "On the other hand, we cannot afford to pull out."

The Obama administration is weighing whether to send thousands of additional U.S. forces to Afghanistan, as commanding Gen. Stanley McChrystal reportedly has urged.

Galbraith also said that unless U.S. and coalition troops can secure significant population centers in Afghanistan, "we're going to be there as an occupying force for a long time ... and that doesn't make any sense."