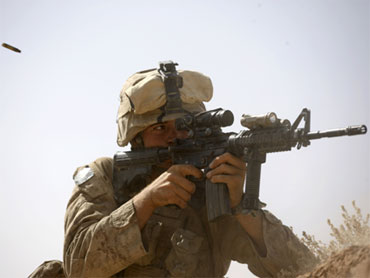 Hundreds of insurgents armed with automatic rifles and rocket-propelled grenades stormed a pair of remote outposts near the Pakistan border, killing eight U.S. soldiers and capturing more than 20 Afghan security troops in the deadliest assault against U.S. forces in more than a year, military officials said.

The fierce gunbattle, which erupted at dawn Saturday in the Kamdesh district of mountainous Nuristan province and raged throughout the day, is likely to fuel the debate in Washington over the direction of the troubled eight-year war.

It was the heaviest U.S. loss of life in a single battle since July 2008, when nine American soldiers were killed in a raid on an outpost in Wanat in the same province.

Gen. Stanley McChrystal, the top U.S. and NATO commander in Afghanistan, plans to shift U.S. troops away from remote outposts that are difficult to defend and move them into more heavily populated areas as part of his new strategy to focus on protecting Afghan civilians.

The Taliban claimed responsibility for the attack. NATO spokesman Brig. Gen. Eric Tremblay said the assailants included a mix of "tribal militias," Taliban and fighters loyal to Sirajudin Haqqani, an al Qaeda-linked militant based in sanctuaries in the tribal areas of Pakistan near the Afghan border.

Coming up on the "CBS Evening News": Afghanistan: The Road Ahead, a 3-part, in-depth examination of the escalating conflict, airing Oct. 5-7, 6:30 ET.

Nearly 300 militant fighters flooded the lower, Afghan outpost then swept around it to reach the American station on higher ground from both directions, said Mohammad Qasim Jangulbagh, the provincial police chief. The U.S. military statement said the Americans and Afghans repelled the attack by tribal fighters and "inflicted heavy enemy casualties."

Details of the attack remained unclear Sunday and there were conflicting reports of Afghan losses due to poor communications in the area, located just 20 miles (30 kilometers) from the Pakistani border and about 150 miles (230 kilometers) from Kabul.

A NATO statement said the attacks were launched from a mosque and a nearby village on opposite sides of a hill, which included the two outposts — one mostly American position on the summit and another mostly Afghan police garrison on a lower slope.

An Afghan military official, speaking on condition of anonymity because of security issues, said three Afghan soldiers and one policeman had been killed in two days of fighting. He also said at least seven Afghan army soldiers were missing and feared captured.

Jangulbagh said 15 Afghan policemen had been captured, including the local police chief and his deputy.

U.S. Capt. Elizabeth Mathias, a military spokeswoman, said American forces continued to man the outpost and there was scattered fighting early Sunday. She said was unclear if the attackers were Taliban or from another group linked to them.

She said American officials were working with the Afghan army to relay messages to Afghan forces in the area.

Nuristan, bordering Pakistan, was where a militant raid on another outpost in July 2008 claimed the lives of nine American soldiers and led to allegations of negligence by their senior commanders. Army Gen. David Petraeus last week ordered a new investigation into that fighting, in which some 200 militants armed with machine guns, rocket-propelled grenades and mortars pushed their way into the base, which is no longer operating.

Badar said he had sought more security forces for Kamdesh district. He said Taliban fighters had fled to Nuristan and neighboring Kunar province after Pakistani forces drove many extremists from the Swat Valley earlier this year.

"When there are few security forces, this is what happens," he said.

He also complained about a lack of coordination between international forces and Afghans.

The U.S. statement said the attack would not change previously announced plans to leave the area.

Afghanistan's northeastern Nuristan and Kunar provinces are home to al Qaeda bases as well as those of wanted terrorist Gulbuddin Hekmatyar, whose military chief Kashmir Khan has been unsuccessfully targeted by U.S. missiles over the past eight years. Kamdesh district has no regular cell phone or landline contact and few roads, dirt or paved. Local security forces communicate by handheld radio. 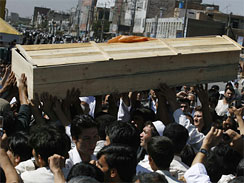 (AP Photo/Fraidoon Pooyaa)
The region was key for Arab militants who battled alongside Afghan warriors during the 1980s U.S.-backed war against invading Russians because it is a rare place in South Asia where the Wahhabi sect of Islam is practiced - the same sect followed by Osama bin Laden and most Saudis.

(Left: Afghans carry the casket of a male student killed by kidnappers, during a demonstration in Herat, west of Kabul, on Sunday, Oct. 4, 2009. Hundreds of Afghans carrying the body chanted slogans against the Afghan government and foreign forces for not providing good security in Herat.)

Many Arabs remained in Afghanistan, marrying Afghans and integrating themselves into local society. Many also belonged to Hekmatyar's Hezb-e-Islami group, now sought as terrorists by the U.S.-led coalition.

It sits directly across the border from Pakistan's Bajaur Agency, where bin Laden's No. 2, Ayman al Zawahri, was last seen.