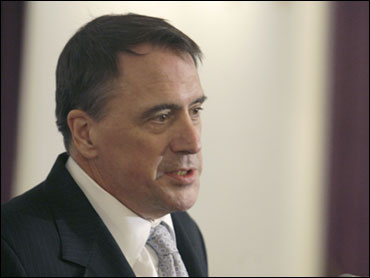 The top American official at the U.N. mission in Afghanistan is losing his job after he disagreed with superiors over how to deal with widespread fraud charges from the presidential election, people familiar with the decision said Wednesday. The U.S. diplomat, Peter Galbraith, denied he had been fired.

The delay in final results from the Aug. 20 vote has led to fears of a power vacuum in the Afghan government that could endure until spring, even as Taliban violence against U.S. and NATO soldiers and Afghan civilians continues to rise. On Wednesday, an American service member died in a suicide car attack on a military convoy in Khost province, near the Pakistani border.

Two U.N. officials confirmed that Galbraith was being recalled by Secretary-General Ban Ki-moon from his job as deputy special representative for Afghanistan. They spoke anonymously because the information has not been officially released.

In an e-mail to the British Broadcasting Corp., which first reported Galbraith had lost his job, Galbraith said: "The secretary general appointed me and has not fired me so far as I know."

A U.N. spokesman declined to confirm reports that Galbraith was fired.

"We are aware of the reports. An announcement of this nature would usually come from the secretary-general's office in New York, but so far there has been no announcement," Dan McNorton said.

Galbraith oversaw electoral matters for the U.N. before and after the vote. He has been in the United States since mid-September, when he left Afghanistan following a dispute with his boss over the best way to handle vote fraud investigations. Both Galbraith and his boss, top U.N. Afghan envoy Kai Eide, said then he was expected to resume his duties in Afghanistan.

Neither Galbraith nor Eide have offered details of the disagreement, though Eide has confirmed that the two split over election issues. "Primarily, we had a somewhat different approach to the election process," he told The Associated Press. He declined to elaborate.

The vote has been marred by charges of ballot stuffing and tally rigging that have delayed final results for weeks and opened the possibility of a government in limbo well into the spring. Preliminary results show President Hamid Karzai winning with 54.6 percent of the vote, but enough votes are questionable that he could dip below the 50 percent needed to avoid a runoff with his top challenger.

Election officials have said a runoff needs to be held by late October to avoid winter snows that block whole sections of the mountainous country until spring.

Afghanistan's Independent Election Commission, which is in charge of running the election, voted overwhelmingly to apply a set of fraud standards to their count that likely would have excluded tens of thousands of votes, only to reverse the decision next day, saying it lacked the authority to enforce the standards, said Galbraith, who had advised the commission. He said at the time the reversal was part of his reason for leaving.

"I leave it to others to decide the plausibility of their decision," he said in a phone interview from Vermont in mid-September.

At the U.N. on Tuesday, Ban said Galbraith had not been removed from his post at that time, but declined to comment on whether Galbraith would remain in the position.

Separately on Wednesday, British Prime Minister Gordon Brown said he would do whatever is necessary in response to calls from the American commander in Afghanistan for more troops.

When asked on Sky News if he was prepared to commit more British troops, Brown said "we will do whatever is necessary."

NATO chief Anders Fogh Rasmussen has stopped short of calling for more combat troops to be sent to Afghanistan, as the Obama administration currently is discussing.

But Fogh Rasmussen says more needs to be done to prepare Afghan military and civilian forces to secure and rebuild their nation.