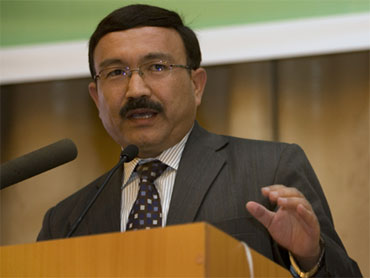 Afghanistan's election commission released preliminary vote totals Wednesday showing President Hamid Karzai with 54.6 percent of the vote in the first full results to be released since the country's Aug. 20 election.

The election still has not been certified as final, though. A U.N.-backed complaints commission is examining thousands of potentially fraudulent ballots. If the commission invalidates enough votes, Karzai's returns could drop below 50 percent, forcing him into a two-man runoff with top challenger Abdullah Abdullah, who has 27.7 percent of the vote.

Fraud accusations have tainted the election. A U.N.-backed group investigating fraud has ordered a massive audit and recount of about 10 percent of the country's voting stations.

A European Union monitoring team, meanwhile, said Wednesday that about 1.5 million ballots of the 5.6 million cast have indications of fraud, using indicators such as overly high turnout or a preponderance of votes for one candidate.

Final, certified results cannot be released until all investigations, audits and recounts are finished, meaning results from the fraud-tainted election are likely weeks away. The longer the count takes, the more likely it becomes that any potential runoff will be delayed until spring; winter snows, due in November, often block roads and isolate villages in the mountainous country, making an election logistically difficult.

Full preliminary numbers from Afghanistan's Independent Election Commission show turnout was about 38 percent, a much lower figure than the 70 percent turnout in the country's first direct presidential election in 2004.

U.S. and U.N. election observers say a runoff must take place before winter sets in or else the process would be delayed until spring, leaving the country with a monthslong power vacuum as the Taliban increases its attacks.

Certified results originally were to have been released this week.

A spokesman for Abdullah said the former foreign minister would speak with reporters Thursday.

Outside monitors have accused the Afghan election commission, which is run by Karzai appointees, of loosening its own fraud-identification measures part way through the counting.

The deputy head of the U.N. mission here said the Independent Election Commission had voted 6-1 for a formula to root out corrupt ballots, only to reverse itself the next day, claiming it had no legal way to enforce those standards. The official, Peter Galbraith, left Afghanistan this weekend after a dispute with his boss, Kai Eide, over the U.N.'s best approach to the allegations of fraud.

Noor said results from more than 600 polling stations were not being included in Wednesday's expected release because of suspicious vote tallies.

Separately, Grant Kippen, the Canadian head of the Electoral Complaints Commission, has said more than 2,500 of the 26,300 polling stations open on Aug. 20 need to be recounted because of potential fraud. The complaints panel has already thrown out ballots from 83 polling stations because of fraud allegations, all in areas with high support for Karzai.

Thousands of fake ballots were submitted across the country, and returns showed Karzai winning 100 percent of the vote in some districts. The most serious complaints were lodged in southern Afghanistan, where Karzai's fellow ethnic Pashtuns predominate, though Kippen said all provinces were affected by the recount order.

Last week, the Washington, D.C.-based National Democratic Institute said its analysis of results found large numbers of stations with more than 600 votes - the 100 percent mark - in Nuristan, Paktia, Helmand and Badghis provinces, along with others.

These are areas considered some of the least secure on polling day and in which anecdotal accounts of nearly empty polling stations suggested low voter turnout. Few international observers went to these areas because of security risks.