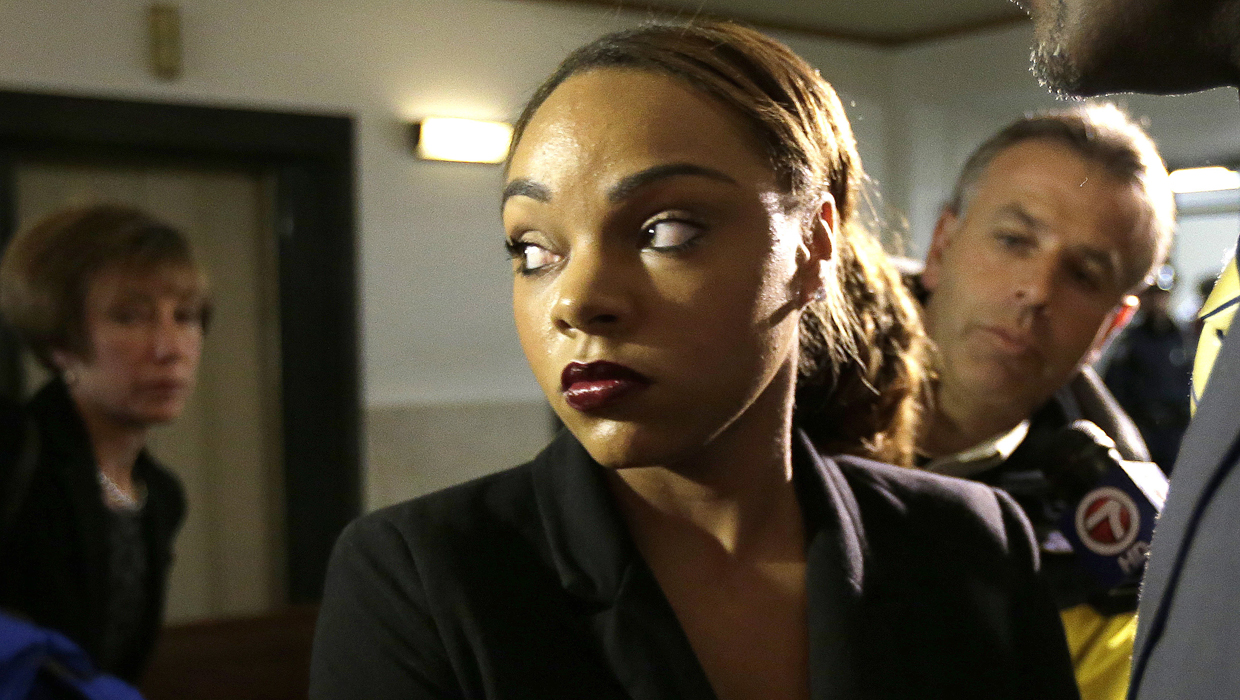 BOSTON -- The fiancee of former NFL star Aaron Hernandez said in an interview that she didn't initially believe he had died in his prison cell and doesn't think his death was a suicide.

The first part of a two-part interview with Shayanna Jenkins-Hernandez aired Monday on the "Dr. Phil " show. The second part is set to air Tuesday.

The former New England Patriots tight end was found hanging in his cell April 19. Hernandez was serving a life sentence in the 2013 murder of Odin Loyd, who had been dating Jenkins-Hernandez's sister. But Hernandez was appealing his conviction and had just days before been acquitted in a 2012 double murder in South Boston.

Jenkins-Hernandez said he was upbeat in their last telephone conversation there was no indication he was suicidal.

"He was very positive," she said.

Jenkins-Hernandez answered questions from host Dr. Phil McGraw about the legitimacy of a suicide note Hernandez wrote that was addressed to her, saying she thought that it was "odd" and didn't seem personal or intimate.

She said the message was a note "of love," but was addressed to "Shay," intead of "babe" or "bae" as he typically referred to her. She said the handwriting was similar, but it was also possible it could have been forged.

"There were some odd parts where it didn't make sense, it wasn't clicking in my head, as far as what he may have been thinking or what he was trying to say," Jenkins-Hernandez said. "It was very short. I feel like, I don't know, I wanted more…I wanted him to explain."

She said another suicide note addressed to the couple's four-year-old daughter was "vague" and "short."

"It wasn't personal in that way where he was referencing games or pet names or favorite books," Jenkins-Hernandez said. "It was nothing like that."

Part of the message to Jenkins-Hernandez also said: "You're rich." Those words have fueled speculation Hernandez left assets to her, but she said she thought about love when she read it and couldn't speak to whether the note was a will and testament.

The state police report said Hernandez wrote "John 3:16," a reference to a Bible verse, in ink on his forehead and in blood on a cell wall. The verse says: "For God so loved the world, that he gave his only begotten Son, that whosoever believeth in him should not perish, but have everlasting life."

A Bible was nearby, open to John 3:16, with the verse marked by a drop of blood.

Some inmates have said Hernandez had become increasingly spiritual during his time in prison, but Jenkins-Hernandez said the bible verse didn't sound like Hernandez and he'd never mentioned it to her.

She said she initially thought the news of Hernandez's death was a "hoax" and some cruel person was playing a trick on her. She didn't offer an explanation for Hernandez's death if it wasn't a suicide and said she had no reason to believe anyone would want to kill him.

Tuesday, in a second portion of the interview, Jenkins-Hernandez is expected to address rumors about Hernandez's relationship with a fellow inmate, Kyle Kennedy.

Speaking last month, Kennedy's lawyer wouldn't address rumors that Kennedy and Hernandez were lovers, saying only Kennedy himself would address the "nature and extent" of the relationship "when the time is right."

Hernandez was so close with Kennedy he corresponded with Kennedy's family, wanted to give him a nearly $50,000 watch and called him by his nickname, "Pure," according to the lawyer, Lawrence Army Jr.

Army read a portion of a letter he said was written from Hernandez to Kennedy's father, in which he described Kennedy as a "brother."

Army said Kennedy believes a third suicide note left by Hernandez was intended for him. But that claim has been disputed, and Jenkins-Hernandez said the third note was addressed to his lawyers.

A judge recently erased the 2013 murder conviction against Hernandez because he died while he was appealing.