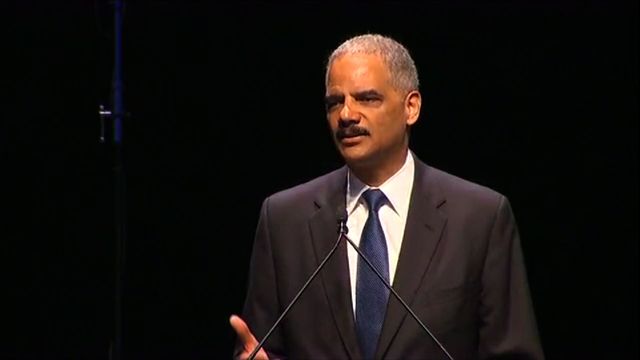 U.S. Attorney General Eric Holder emphasized Thursday that the events unfolding in Ferguson, Mo., "cannot continue" and condemned both acts of violence by the public and heavy-handedness by law enforcement.

"At a time when we must seek to rebuild trust between law enforcement and the local community, I am deeply concerned that the deployment of military equipment and vehicles sends a conflicting message," Holder said.

In a statement released just a few hours after President Obama spoke on the tense situation in suburban St. Louis, Holder said the Justice Department is offering technical help to authorities on the ground with crowd control and maintaining public safety while avoiding extreme uses of force by police.

He also said the department's civil rights investigation into the case is continuing. Investigators from the Civil Rights Division and U.S. attorney's office have already conducted interviews with witnesses of shooting victim Michael Brown, who was killed Saturday by a Ferguson police officer. Police chief Tom Jackson said the 18-year-old got into a physical altercation with the officer and tried to grab his gun. But several witnesses have said publicly that the officer shot Brown while his hands were up and was surrendering.

Since the shooting, tensions have flared in the small city of about 21,000 and outside of what authorities have said were overall peaceful protests, vandalism and looting have been reported as well as several run-ins between law enforcement and demonstrators.

In at least one incident, armored police fired tear gas and rubber bullets at crowds as a response to Molotov cocktails being thrown.

Wednesday night, two journalists, Wesley Lowery of the Washington Post and Ryan Reilly of the Huffington Post were in a McDonald's when they were ordered to leave. The reporters say police became rough with them, then placed them under arrest, though they were later released.

Holder spoke specifically to these incidents.

"The law enforcement response to these demonstrations must seek to reduce tensions, not heighten them," he said. "Those who peacefully gather to express sympathy for the family of Michael Brown must have their rights respected at all times. And journalists must not be harassed or prevented from covering a story that needs to be told."

Meanwhile, Missouri Gov. Jay Nixon said he plans an "operational shift" in police handling of the protests. He said that the people in Ferguson must be able to continue demonstrating peacefully.

"There is a certain level of emotion that must be expressed in order for us to reach a higher plane," Nixon told an audience in Florissant, Mo. "And my sense is over the last few days, there has been a fear to hear."

Congress is also responding to the unrest. Georgia Rep. Hank Johnson, is planning to introduce legislature that would restrict a Defense Department program which give free surplus military equipment to local law enforcement.