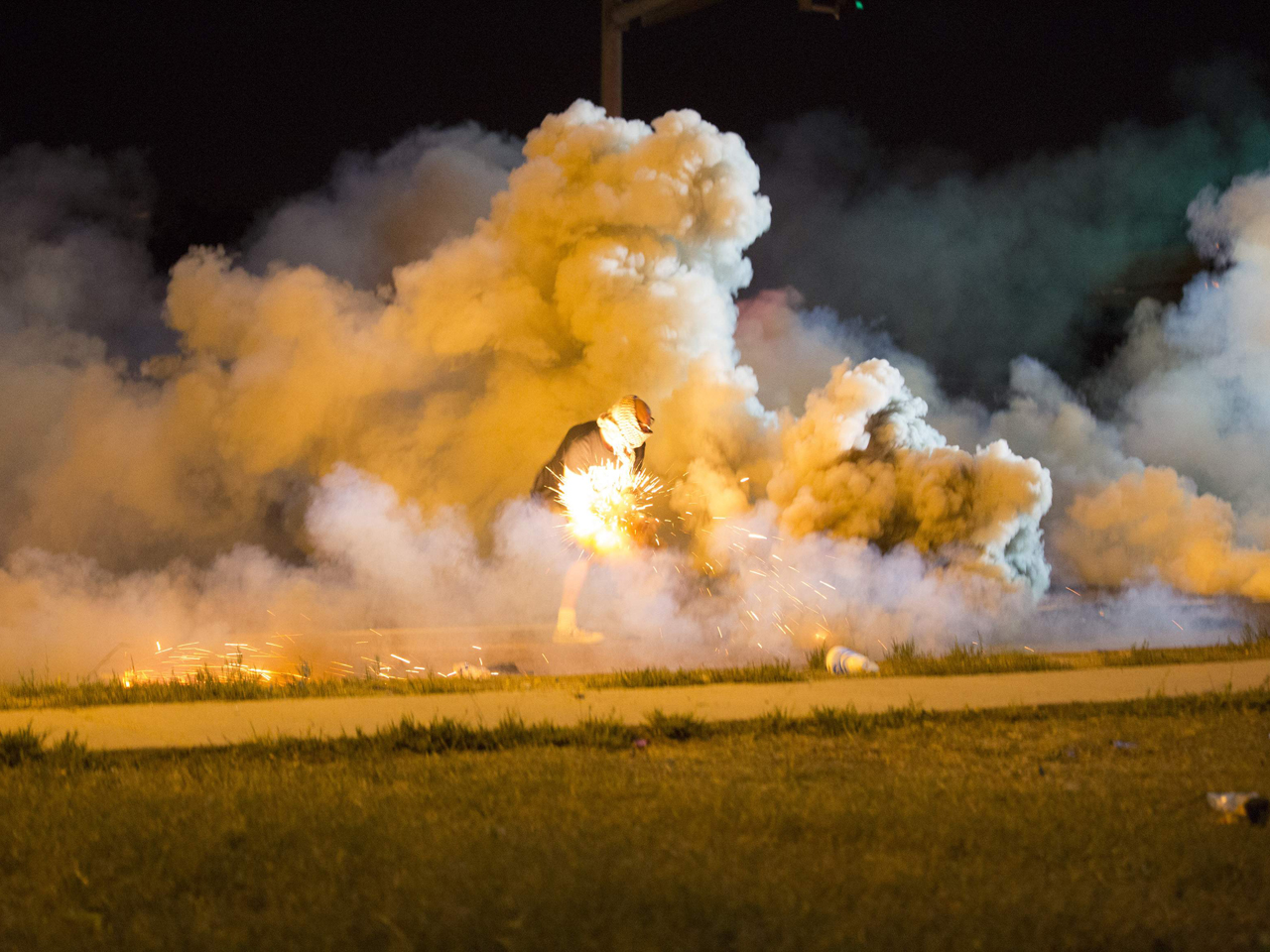 FERGUSON, Mo. -- Police used tear gas and smoke bombs to repel crowds who threw Molotov cocktails during another violent night in a St. Louis suburb in the wake of the shooting of unarmed 18-year old Michael Brown.

CBS News correspondent Mark Strassmann reports from Ferguson that a second witness has come forward who claims to have watched a white police officer fatally shoot the black teen.

Tiffany Mitchell said she found Brown next to a police car struggling with an officer inside. Shortly after, a gunshot was fired.

"After the shot, the kid breaks away, and he starts running away from the cop," Mitchell said. "The cop follows him, kept shooting, and the kid's body jerked as if he was hit."

The 18-year-old tried to record the struggle on her phone but was too startled by the gunshots, Strassmann reports.

"After his body jerked, he turned around," Mitchell said. "He puts his hands up, and the cop just continues to walk up on him and shoot him until he goes all the way down."

On Wednesday, the police chief had said race relations were the top priority in the town. Authorities have vowed to reach across the racial, economic and generational divide in a community in search of answers.

In the streets of Ferguson, though, the polite dialogue heard at community forums and news conferences is nowhere to be found.

Instead, officers from multiple departments in riot gear and in military equipment have clashed nightly with protesters, who chant, "Hands up, don't shoot." Wednesday saw more tense confrontations and further volleys of tear gas from police - this time paired with smoke bombs in response to flaming projectiles and other objects lobbed from the crowd. Protesters faced heavily armed police who at times trained weapons on them from armored trucks.

Several journalists were also allegedly physically assaulted by police, Strassmann reports. Officers stormed a McDonald's where Ryan Reilly of The Huffington Post and Wesley Lowery of The Washington Post were working, telling them to stop recording and leave.

One officer reportedly slammed a reporter's head against glass. They were eventually detained and released shortly afterwards.

Strassmann reports that police made 16 arrests and that one officer was injured overnight.

CBS St. Louis affiliate KMOV-TV reports that the arrests included St. Louis Alderman Antonio French, who has been chronicling the protests on social media. Police had said earlier they would not have arrest information until early Thursday.

The White House said President Obama - who is on vacation on the Massachusetts island of Martha's Vineyard - was briefed late Wednesday on the situation in Ferguson by Attorney General Eric Holder and senior adviser Valerie Jarrett. Mr. Obama has another briefing scheduled for Thursday morning.

Residents in Ferguson have complained about what they called a heavy-handed police presence that began with the use of dogs for crowd control soon after Brown's shooting - a tactic that for some invoked the specter of civil rights protests a half-century ago.

County Police Chief Jon Belmar, though, said his officers have responded with "an incredible amount of restraint," as they've been the targets of rocks, bottles and gunshots, with two dozen patrol vehicles being destroyed.

"It's pretty amazing how impressed I am and inspired by these officers," he said. "This is a very difficult circumstance."

Police had also asked earlier that people assemble in "an organized and respectful" manner and disperse before evening.

The city and county are also under criticism for refusing to release the name of the officer involved in Brown's shooting, citing threats against that officer and others.

Jackson said he welcomes Justice Department training on racial relations in the suburb, where two-thirds of the 21,000 residents are black while all but three of the police force's 53 officers are white.

Missouri Gov. Jay Nixon asked community members to be patient and calm while the investigation proceeds and urged law enforcement agencies to "keep the peace and respect the rights of residents and the press."

Jackson said the investigation remains weeks away from completion.

Police have said Brown was shot after an officer encountered him and another man on the street. They say one of the men pushed the officer into his squad car, then physically assaulted him in the vehicle and struggled with the officer over the officer's weapon. At least one shot was fired inside the car.

The struggle then spilled onto the street, where Brown was shot multiple times. In their initial news conference about the shooting, police didn't specify whether Brown was the person who scuffled with the officer in the car and have refused to clarify their account.

Dorian Johnson, who says he was with Brown when the shooting happened, has told a much different story. He has told media outlets that the officer ordered them out of the street, then tried to open his door so close to the men that it "ricocheted" back, apparently upsetting the officer.

Johnson says the officer grabbed his friend's neck, then tried to pull him into the car before brandishing his weapon and firing. He says Brown started to run and the officer pursued him, firing multiple times. Johnson and another witness both say Brown was on the street with his hands raised when the officer fired at him repeatedly.