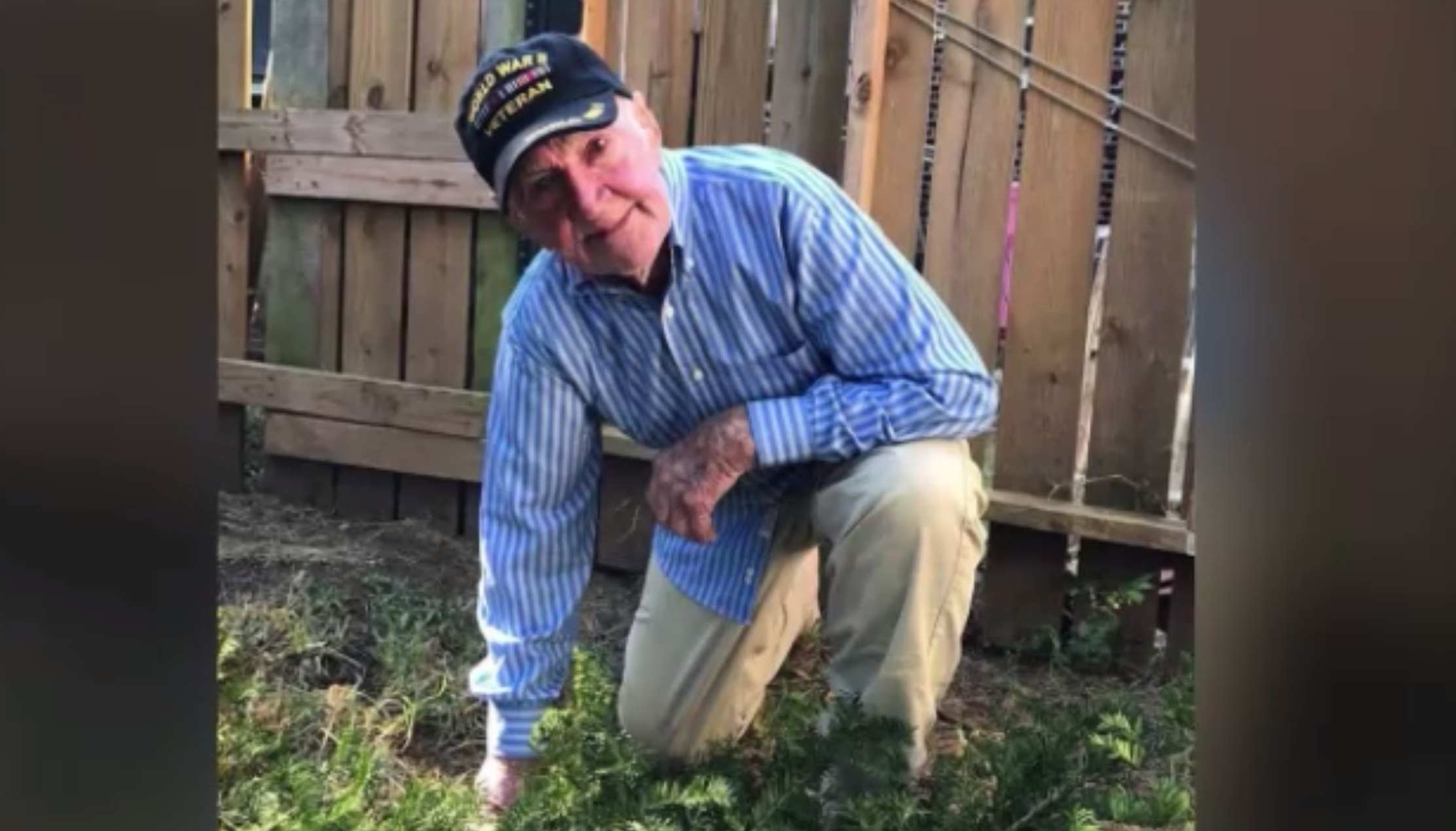 Hours before NFL players across the league took a knee during the national anthem in defiance of President Trump on Sunday, one World War II veteran hosted a protest of his own — in his backyard.

"These people have every right to protest," John Middlemas, a 97-year-old farmer from Springfield, Missouri, told his grandson, Brennan Gilmore, before kneeling.

After a family discussion about Mr. Trump's view that players who kneel during the "The Star-Spangled Banner" should be fired, Middlemas decided to make a statement.

"We were having a discussion about it and you know, the idea that people were pointing to disrespecting military servicemen as justification for these comments," Gilmore told CBS News. "He wanted to send a message of solidarity to them."

So Middlemas walked outside to the backyard, got down on one knee and posed while his daughter, Maile Auterson, snapped a picture. Since Middlemas doesn't have a Twitter account, Gilmore volunteered to post the image himself.

"My grandpa is a 97 year-old WWII vet & Missouri farmer who wanted to join w/ those who #TakeaKnee: "those kids have every right to protest," Gilmore tweeted on Sunday.

Gilmore said he was blown away by the outpouring of support for his grandpa, who served in the U.S. Navy for 21 years.

As of Monday afternoon, the tweet was shared nearly 140,000 times. Some internet users even started referring to Middlemas as "America's grandpa."

"I thought it was pointed representation," Gilmore said. "I think a World War II veteran has the moral authority to speak more than basically anyone about what our veterans fought for. And I think it really resonated with people."

Former San Francisco 49ers quarterback Colin Kaepernick, who remains an unsigned free agent, started the kneeling movement in 2016 to protest racial injustice in America. Activists and critics of the league believe Kaepernick has been blacklisted for his protests.

Middlemas has been an ally to the civil rights movement for many years, Gilmore said. In 2013, he participated in a "Unity March" in Springfield to commemorate the 50th anniversary of Martin Luther King Jr.'s "I Have a Dream" speech.

"Dr. King has always been a hero to him," Gilmore said. "When he was younger, he talked about wanting to see him alive to be president."

The 97-year-old told the Springfield News-Leader his desire for equality is rooted in his time working alongside black service members while deployed on eight separate submarines throughout his military career.

"I'm trying to say that you have to love everybody," Middlemas said to the local newspaper. "We don't kill people. We want to make people live."

On Monday, Mr. Trump claimed "many people booed" professional football players that kneeled during the Star-Spangled Banner, and he repeated that kneeling "has nothing to do with race," even though many players kneeled during the national anthem to protest the treatment of blacks by police.

Middlemas and Gilmore don't see any conflict between patriotism and the urge to protest against injustice.

"The issue isn't about disrespecting the symbol of the flag and the anthem, but the core issues and values that those symbols represent, free speech and the effort to try to be the best country — the country my grandpa and others fought for," Gilmore argued.