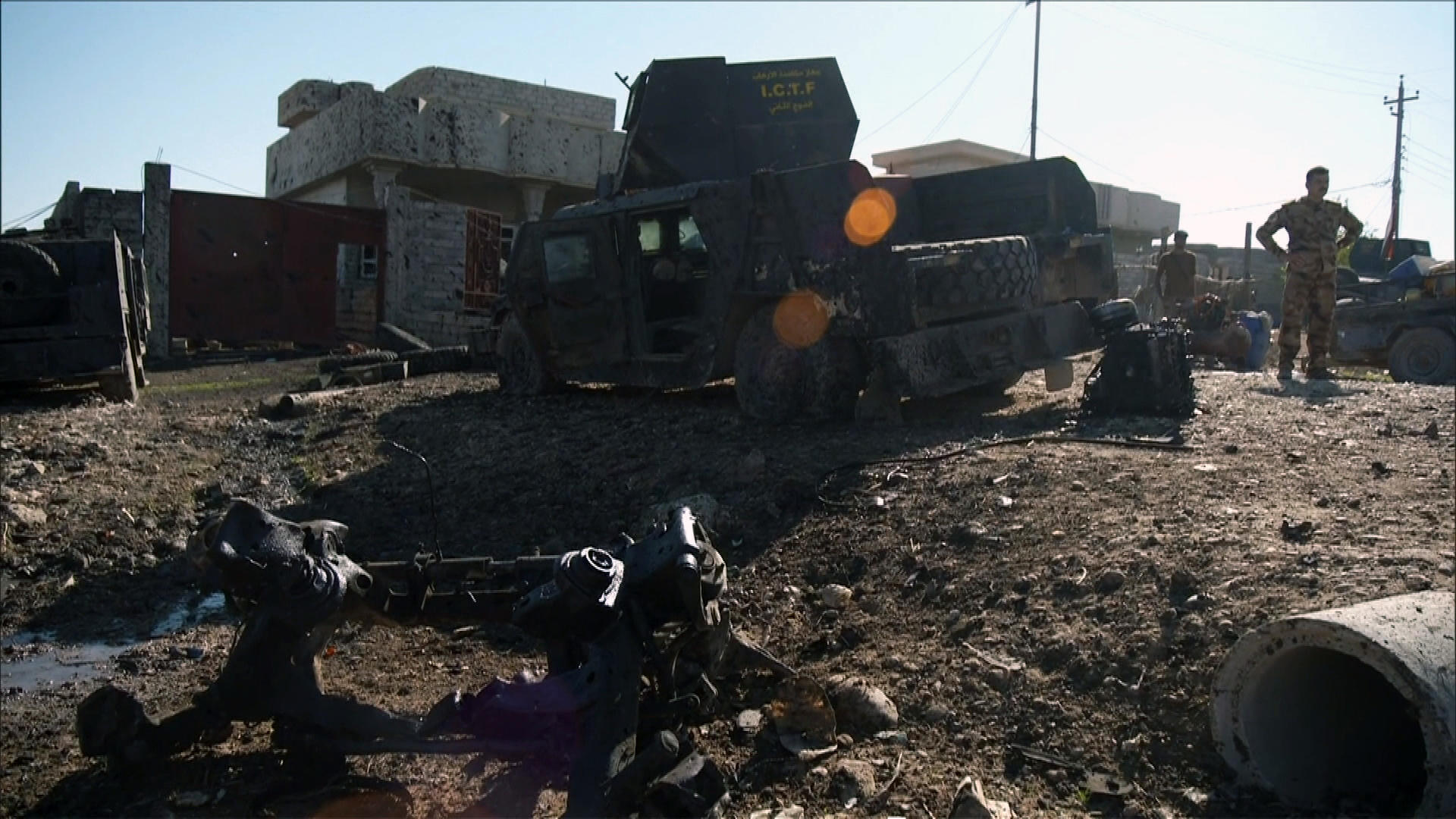 Editor’s Note: During our report on the battle to take back Mosul, 60 Minutes used video that was bravely shot by BBC cameraman Marek Polaszewski. Mr. Polaszewski was traveling in the same military convoy as our team but was the only journalist able to capture the detonation of a deadly car bomb seen at the end of our story.

The following is a script from “The Battle for Mosul,” which aired on Nov. 6, 2016. Lara Logan is the correspondent. Max McClellan and Richard Butler, producers.

The battle for Mosul began in earnest this past week as Iraqi forces began the long, hard fight to defeat ISIS there. It was 2014 when this historically important, industrial city of some 2 million people was stormed and captured. Today, much of its civilian population is trapped between ISIS and the advancing Iraqi army. With Turkey to the north and Syria to its west, Mosul is located on the Tigris River, well north of Baghdad.

If there was ever any question what a full on war against ISIS fighters would look like -- it is on display in Mosul, and you will see it in this story tonight.  Lara Logan and a 60 Minutes team joined an Iraqi Special Operations Brigade from the Golden Division as they fought ISIS neighborhood by neighborhood.

The battle for Mosul is already a brutal one and some of the images in our story are graphic.  Lara Logan has our report from the frontline.

When we arrived at their forward base in East Mosul, the Golden Division had just begun their push into the city. Only 30 minutes later an Iraqi soldier shouted, “It’s coming to us, It’s coming to us.” An ISIS suicide car bomber was racing toward them.

One of our cameramen, Scott Munro, pointed his camera at the road in front of the building.

Gunfire erupted. Another suicide car bomber was trying to break through.

They’d stopped the first bomber before he reached the entrance to our building.  And by now, every weapon within reach was firing. Their defense seemed to re-route the second bomber, who disappeared from view.

He’s proven to be one of Iraq’s most effective weapons against the Islamic State, or Daesh, as they’re known to Iraqis.

Lara Logan: It happened so fast.

Salam Hussein: So fast because the houses are so close they just use civilian cars to attack our forces.

Lara Logan: So this is more of what you can expect in Mosul?

A black crater burned into the earth marked the spot where his men stopped the bomber. There was little left of the car, just pieces of metal strewn...and the engine, still smoking. That’s the bomber’s shoe.

Lara Logan: You’ve been fighting ISIS ever since they took Mosul in June 2014.  Right?

Lara Logan: How many operations have you commanded against Daesh, do you know?

Lara Logan: How far is the enemy’s side there?  How far from us?

Major Salam used a drone, his eyes in the sky, to search the streets for any sign of the second bomber.

Suddenly, another drone was overhead -- it was the enemy’s. Everyone was ordered off the roof. ISIS makes their own drones. We were told this one carried C4 explosives and targeted Major Salam.

Salam wanted to show us how long ISIS had been preparing for this battle, so he brought us to this open-tunnel system, not far from their base. It’s purpose: to provide cover and run fighters from village to village.

Lara Logan: This runs from where?

Salam Hussein: From Bartella all the way to Mosul.

Lara Logan: All the way to Mosul? And how far is that?

Twenty-five kilometers or about 16 miles long. And nine feet down, lay the bodies of ISIS fighters his men had just killed.

The Golden Division punched through Mosul’s city limits last week, since then it has been engaged in intense combat and taking back a fraction of the city.

Major Salam knows more about ISIS and its fighters than almost anyone. His elite soldiers fought them when the Iraqi army wouldn’t. In Mosul, keeping the civilians safe is one of his main priorities…We saw hundreds of them – women and children fleeing, carrying all they could, including white surrender flags. Salam said ISIS has used a different strategy in every city but they always fight to the death. He told us they have killed 150 of his soldiers.

Lara Logan: You almost were killed in Fallujah.

Salam Hussein: The rocket go through the window and blow inside the vehicles. And I found myself bleeding.  I didn’t care if some part of my body got cut or something like that.  I tried to stop just the pain on my head by any way.

Lara Logan: You should not be sitting here right now. You should be dead by now.

We’d been together for a matter of hours and had already encountered a suicide bomber, a drone and just outside Major Salam’s headquarters snipers.

Our team ran for cover. You can hear the snap of the bullets. Cameraman Richard Butler was there first. We were pinned down for few minutes until Major Salam’s men sent this bulldozer to cover us from the sniper.

As the light faded on our first day, we watched the major brief commanders about the plan for a major advance the next morning. He’d be leading the assault from this part of the Eastern front. They shared concerns about pressure coming from the Iraqi government to push forward too fast.

Lara Logan: Do you think they’ll attack you before your attack them?

Salam Hussein: They will attack us before we attack them.

No one is sure how many ISIS fighters are in Mosul. But the Iraqi army told us they believe there are around 5,000.  It’s the city where the group’s leader declared the establishment of their caliphate. Three years after America withdrew combat troops from Iraq, the U.S. military is back providing support on the ground and – notably – the skies above.

Lara Logan: Can you win this fight without the support of American air power?

Salam Hussein:  It will be possible but it will be difficult. Our forces will bleed more.

Lara Logan: Will you say it’s critical to your forces?

Major Salam has a reputation for leading from the front, and while we were with him, we found that to be true.

This was the deepest advance into ISIS-controlled Mosul. The enemy was ready. 60 Minutes cameraman Richard Butler filmed these images from Major Salam’s convoy.

Lara Logan: For much of the offensive you couldn’t get out of the vehicle to film because you were under such heavy fire.

Richard Butler:  You just couldn’t get out. I mean they had the-- you know, the back of the Humvee when we went out was-- you know, stacked with ammo. And--

Lara Logan: And you went through it all?

Richard Butler: And we were down to 400 rounds, which might sound a lot. But--

Lara Logan: That’d be gone in a few minutes the way they were fighting.

Richard Butler: The way that fight was going 400 rounds wouldn’t get you 60, 70 seconds of firepower.

Richard Butler: It’s not like a regular army they’re fighting or like regular insurgents or even terrorists. This is en masse a suicidal army.

Salam Hussein: They used everything, they used the car bomb, they used RPG7, they use the snipers.

Casualties were brought back to the base, from the fight a mile away. Sixteen hours later, Major Salam’s men had taken back more ground from ISIS. He looked for a building to set up a command post in the newly captured neighborhood.

Richard Butler: I went where Major Salam had gone in a little courtyard and they were trying to open the door to the house and it was locked. It had a metal gate over the door and they tried to kick the door in so he immediately sat down by the wall, got out his iPad and was looking for another location close by that he felt they could move to and no sooner had he put his finger on one we heard…

Richard Butler: It was massive and it just, first of all, the shockwave. Then chunks of metal. Then glass, dirt, body parts, you name it came raining down. And some people were stunned. It’s so much, it sucks the oxygen out. So it’s hard to breathe. Takes time to get reoriented. The  moment my hearing came back, I could hear the rounds coming in. To their credit, you know the soldiers that had been blown off their feet were back in the fight.

Major Salam lost four men in that last suicide attack, including his chief of security who was a close friend. That’s him behind the major…just hours earlier.

Salam Hussein: These soldiers tried to, they thinking protecting me more than anything else. I’m sorry it happened, but I mean this is the war, we lost a lot of brothers in this war.

We spent 48 hours on the eastern front in Mosul. Not a lot of time but enough to know what this fight is about: a terrifying street-by-street struggle against an enemy who welcomes death.