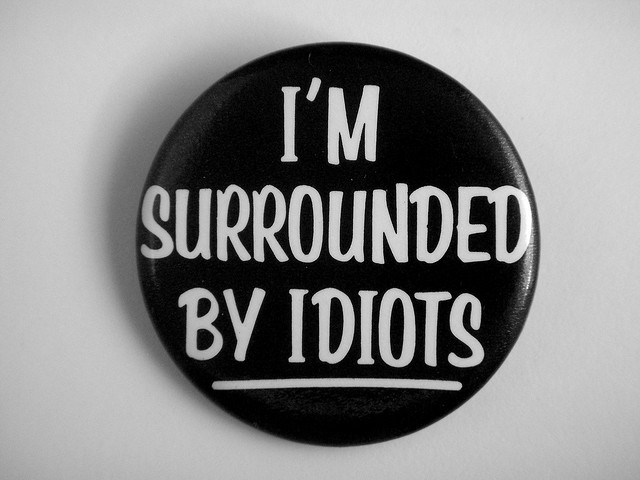 COMMENTARY You hear it all the time: "He's completely clueless." "What in the world were they thinking?" "That's the dumbest idea I've ever heard." And when you hear it coming out of your own mouth, that means you're having an "idiot boss" moment and are probably heading for the margaritas, the LinkedIn (LNKD) jobs page, or both.

It's rough when your boss is an idiot. Even worse is when the CEO is an idiot. And sometimes the idiocy propagates throughout the entire management team like a contagious superbug.

A friend of mine is jumping ship from a once-great company that's now run by morons. The company used to have a market cap of $50 billion. Now it's worth about one tenth of 1 percent of that. When my friend actually pondered if he should quit the Popsicle stand for a better position at an awesome, growing company, I thought, "OMG, the idiocy's gotten to him too!"

I have those idiot boss moments all the time. No, I don't really have a boss these days, but now it's even worse because I'm always hearing and writing about executives and boards of companies that make the same dumb mistakes over and over. And some of them are pretty hard to believe.

Over the past year alone, executives of tech giant HP (HPQ) and BlackBerry maker Research In Motion (RIMM) couldn't have done a better job of driving their companies off a cliff if they'd cut the brake lines and floored the accelerator pedals themselves.

RIM's co-CEOsrecently stepped down, replacing themselves with a guy who plans to keep things more or less status quo. Investors, who lost about $70 billion over the past three years or so, weren't too happy about that. Isn't the definition of insanity doing the same thing over and over and expecting a different result? Yeah, it's not too bright, either.

Yahoo's (YHOO) corporate color is purple. Company founders Jerry Yang and David Filo thought that was the color of creativity and innovation. After five years of mega screw-ups and gross mismanagement, I'm beginning to wonder if somebody dropped a batch of magic mushrooms into the purple paint at company headquarters. I don't think shareholders would be one bit surprised to learn that Smiley here, from Yahoo's corporate values page, is actually running the show.

Enough with the fun and games; let's get serious about what you should do when you have those idiot boss moments. Here's a hint: it's not necessarily all bad; you have more choices than you think.

Are you sure it's not you? In the case of my friend's company, as well as Yahoo, RIM and HP, there is definitely something screwy going on with the leaders of those companies. But that's not always the case. Sometimes we lash out at our bosses because we're frustrated with ourselves, jealous that someone else got the promotion, or angry that we're not doing better than we are. Sometimes we're looking for a fall guy or someone to demonize because it's too painful to look in the mirror. Not that I'm a shrink or anything, but it's often the case, nevertheless.

Cut them some slack. To be fair, most employees aren't aware of everything that goes on behind closed doors and exactly why decisions they may think are stupid are actually made. And even if they are dumb, bosses are human too, which means they're allowed to make mistakes. Nevertheless, it's frustrating when those mistakes give you a massive headache or a shrinking bank account. In that case, you still have three more choices.

Say something to someone. Not that I'm saying you should, but before you drink yourself into oblivion, drive yourself nuts, or throw in the towel and move to a deserted island, you might consider actually saying something to your boss or someone in the chain of command. Who knows? They might actually appreciate the feedback. Maybe you know something they haven't thought of. Or maybe they'll label you a troublemaker and fire you on the spot. I'd think long and hard about it, but in any case, it's an option.

Head for the bar. Or better still, the gym. When you're stressed out, burned out, or just plain mad at the world for sticking you with a bunch of idiots for managers, it always helps to remind yourself that life is more than your job. So, whatever works for you to push the reset button and get some perspective, do that -- you'll feel better. And keep doing it over and over until you can't take it anymore. Then you're down to the last option.

Head for the hills. The reason why you should never let any of this stuff really get to you, ruin your day, or ruin your life, is because you live in a free country. And while it's a really tough job market, you can always quit and do your own thing or, in time, find another job. Sometimes even committing in your head to get the heck out as soon as you can and beginning the search process is enough to make you feel better. Really.

Those are my five ideas for what to do about an idiot boss. If you've got a better idea, I'm sure we'd love to hear it.

What can you expect when you're promoted?
Steve Tobak