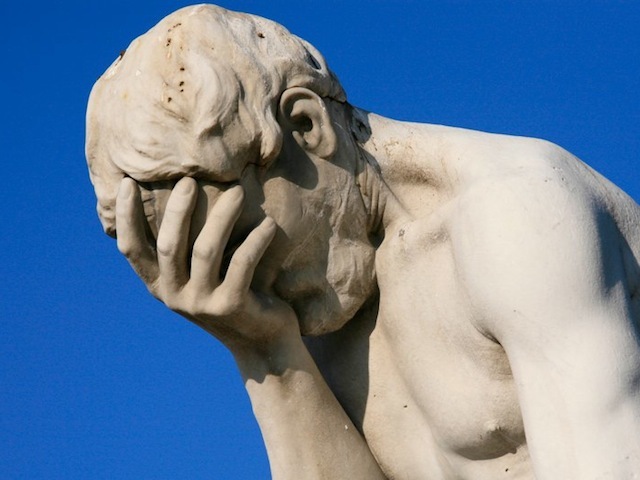 COMMENTARY These days I'm constantly bombarded with books and articles about why leaders, executives and companies fail. It's mindboggling. Most of the "sage" advice is pretty weak, running the gamut from the absurdly obvious to the obviously absurd.

One article by author and psychologist Jack Stark lists the top five reasons leaders fail as greed, insecurity, power, arrogance and narcissism. Can't say I disagree, but I seriously doubt if any of the CEOs I know will be running to a shrink anytime soon. Maybe they should.

Mark Stevens, author of "Your Marketing Sucks," says companies fail because of "lack of leadership." Well, thank you Captain Obvious. To be fair, he also lists "complacency" and "conventional thinking," which I do agree with.

Why leaders need a good shrink, not a coach10 reasons why smart people do dumb things

And while leadership experts blog and tweet all sorts of generic, esoteric nonsense, executives and their companies keep making the same dumb mistakes they've always made, over and over again. Here are my top 10, along with some recent and notable examples:

Killing promising new businesses to maintain old ones. Kodak (EK) just filed for Chapter 11 bankruptcy protection after years of mismanagement and playing catch-up in digital photography. Ironically, Kodak invented the digital still camera in 1975 and then sat on it for a quarter of a century, presumably because it threatened their cash cow, film. When will companies learn that if you don't cannibalize your own business, competitors will do it for you?

Lack of objectivity and perspective. Probably the most common mistake executives make is being too self-contained or breathing their own fumes. They stop asking questions like, "How are we doing," and when a daring customer or employee tries to provide some feedback, they ignore it. As failure modes go, this one even takes down big companies like BlackBerry maker Research in Motion (RIMM), for example.

Failure to articulate the company's strategy. It's absolutely appalling -- and I never use that word -- that there are large, public companies with CEOs who cannot tell you what the company's unique vision and value proposition are. As one VP said of Scott Thompson, the new CEO of Yahoo (YHOO), "Maybe he can let us all finally know what Yahoo is." If he can do that, maybe he can help Radio Shack (RSH) and Sony (SNE), too.

Chronically bleeding red ink. Over the years, I've watched dozens of once prominent companies continue to lose money, quarter after quarter, year after year, until they're either acquired for peanuts or they file for bankruptcy protection. Just so I don't keep picking on Kodak, anybody remember Sun? And will anybody remember Sony 20 years from now?

Poor risk management. The flipside of taking no risks and trying to make believe the world is static is unnecessarily betting the company on huge mega risks or jumping from one strategy to another hoping that one will actually stick. An example of the latter is the current incarnation of AOL (AOL). An example of the former is the old AOL's merger with Time Warner (TWX). And Sprint (S) betting the farm on its iPhone deal somehow manages to fall into both categories.

Ignoring hot new trends. Resting on your laurels, ignoring viral trends and failing to innovate turns market leaders into dinosaurs in record time. Besides Kodak and RIM, there's Nokia (NOK), Yahoo, and for some historical perspective, big iron computer companies like Digital Equipment Corp. whose CEO couldn't understand why anyone would ever want to own a computer.

Dumb customer service policies. It's one thing to suffer a temporary bout of bad customer service over a poorly handled crisis or two, but some companies have systemic issues with bad policies and procedures. The reason, I think, is the inherent conflict between the customer's satisfaction and the company's customer service expense and efficiency. Still, that's no excuse for customer service nightmares we all experience, like these.

Harassing customers. We all get spam in our inboxes, but most annoying is the spam you can't get rid of no matter how many times you unsubscribe. Don't these companies know better? I mean, would you ever consider doing business with a company that doesn't honor unsubscribe requests? Take it from me: persistence is fine, but harassment has the opposite effect.

The Peter Principle. Last but certainly not least is the gold standard of executive failure, the Peter Principle. Incompetence that breeds more and more incompetence, like a Petrie dish in a bizarro universe where the laws of natural selection work backwards, is the perennial gift of business mediocrity that never stops giving.

Joining a startup? 6 signs it'll be a success
Steve Tobak