MINNEAPOLIS (WCCO) - Next month Minnesota law enforcement will mark the 15th anniversary of the death of Trooper Ted Foss by cracking down on violators of the state's "move over" law.

The law, passed in 2002 after Foss was killed by a careless semi-truck driver, requires motorists to give one lane of cushion space when passing stopped emergency vehicles with flashing lights.

"The intention of the law is to give us a safety zone," Lt. Tiffani Nielson, the patrol's spokesperson, said. "We want drivers to move over. We want that space, that buffer."

But critics say that despite its good intentions, the law hasn't been proven to make the roads safer and that Minnesota's statute should allow motorists the choice to slow down instead of moving over.

"It causes more chaos than anything," said traffic attorney Mitchell Robinson, who has litigated a number of move over cases. "People are trying to move over to the right lane, but there are other cars there. People are moving at 60 miles per hour. It's really very subjective to say if it's safe for somebody to move over."

(Full disclosure: I was issued a move over citation in March.)

The first move over law in the United States passed in 1996, in South Carolina, after a paramedic broke an arm and a leg. By 2012, all 50 states had adopted similar laws.

But after nearly 20 years, the shoulders of American highways do not appear to be much safer for emergency workers.

Between the early 1990s -- before the first laws passed -- and today, the data don't show a statistically significant decrease in either the number of police officers or the number of roadside workers who have died after being struck by a vehicle on the side of the road, according to the Bureau of Labor Statistics and the National Law Enforcement Memorial. 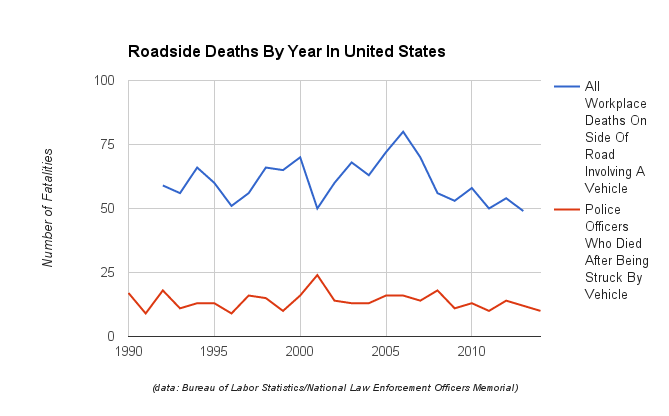 In Minnesota, Nielson said, limited data and the lack of independent research make it impossible to draw statistically valid conclusions about the move over law's effectiveness.

The State Patrol's records go back only to 2008 -- six years after the move over law was enacted. (They show that motorists have struck about 23 parked squad cars each year and injured about six troopers.) 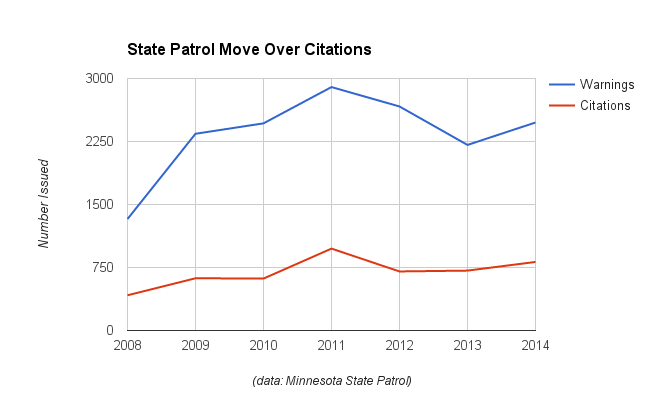 Have you ever stood still as 4,000 pounds of metal driven by a sleep-deprived 16-year-old rolls past you at a speed of 70 miles per hour and a distance close enough to rustle hair?

"I'd call it an unsettling feeling," Nielson said.

It's no surprise why supporters of move over laws downplay the statistics and emphasize the grisly horror of roadside deaths.

"We need to protect the people who protect us," Super Bowl Champion Tony Siragusa says in a public service announcement for New Jersey's move over law.

Nielson said quantitative research into the move over law's effectivity is not necessary.

"If we can prevent one death, it's worth it," she said. "We do know that being hit by a vehicle on a freeway is going to cause a fatal injury, and if there are laws in place that try to reduce that risk, then [those laws] prevent the potential for a death or an injury."

But this type of reasoning strikes a chord with former state Rep. Mike Beard.

He said he's sympathetic to arguments about safety, but without data to prove otherwise, the move over law might be doing more harm than good.

"We react to these tragedies, but sometimes we react a little more strongly than common sense would dictate," he said. "There's just cause for thinking the law is not working as intended and some aspects of the law could actually be leading to more accidents -- people clipping each others' corners, spinning out, losing control."

Minnesota's law allows drivers to slow down if it's not possible to move over a lane, but Beard said it can be hazardous to force motorists to make that split-second determination.

"A motorist may feel compelled to dive out of their lane and force a merger when the merge might actually be more dangerous," he said.

In 2012, Beard introduced a bill to change the law and allow motorists the option of moving over or slowing down. Wisconsin, Iowa, Missouri and more than a dozen other states have "or slow down" provisions in their move over laws.

"The firestorm of angry, and even hateful, emails, phone calls and letters I got was breathtaking," Beard said. "I had no idea that firefighters, tow truck officers and police officers could be quite so nasty, ugly even. It was intense. It was an emotional, knee-jerk reaction."

Beard decided to "park" the bill, ensuring it wouldn't make it to the House floor.

For workers exposed to the frightening dangers of highway traffic, move over laws are an intense and personal issue.

"If you decide you need to make an exit at the last second, you're going to make it," Nielson said. "Drivers don't think the same way about moving over for a firefighter, medic or police officer. They tend to make decisions based on whether it's beneficial to them, but they don't always consider the people on the side of the road. This law forces them to consider it."

But some observers with less of an emotional investment find it troublesome that more attention isn't being paid to whether the laws are working.

Beard is asking for standardized reporting to collect consistent, credible data, but in the meantime, he said he hopes drivers will stay alert behind the wheel and make intelligent choices.

"Safety is job No. 1," he said, "not conformity with some state statute that may or not make sense."