MIAMI (CBSMiami) -- Hurricane Sam remains a Category 4 storm in the Atlantic expected to create life-threatening surf and rip currents along the east coast this weekend.

Max currently has max sustained winds of 130 mph and its moving northwest at 9 miles per hour. 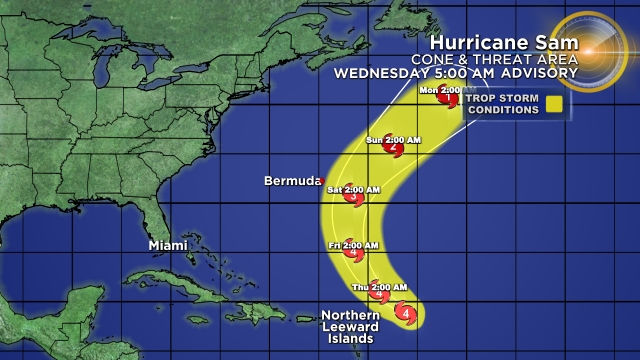 However, Sam is already sending dangerous ocean swells to islands hundreds of miles away and those swells will spread to the Virgin Islands, Puerto Rico, Hispaniola, the Bahamas and Bermuda by Thursday or Friday, then crash against the U.S. east coast beaches this weekend.

The CBS4 Weather team is also tracking an area of low pressure located several hundred miles south of the Cabo Verde Islands that is becoming better organized and has a high potential of cyclone development.  If the current trends continue, advisories will likely be initiated on a tropical depression or tropical storm later Wednesday. The next name on the list: Teresa. This system is expected to move west northwestward at 10 to 15 mph over the eastern Atlantic during the next several days.

In addition, a trough of low pressure located several hundred miles southwest of the Cabo Verde Islands.  Development of this system appears less likely due to the interaction with the larger low-pressure area located to its east. The Hurricane Center is giving this a low potential of cyclone development. The system is forecast to drift west northwestward over the tropical central Atlantic during the next few days.

Finally, an area of low pressure associated with the remnants of Peter located several hundred miles south of the coast of Newfoundland is producing disorganized showers and thunderstorms. The National Hurricane Center says this disturbance only has a 10% chance of development. This system is moving northeastward into a region of very strong upper-level winds, and significant development is not anticipated.