They are angry over soaring hyperinflation, lack of food, medical shortages, corruption, Cuban intervention, the mass exodus of millions, and what they call a 'lack of a true democracy.'

In South Florida, hundreds gathered in front of the Venezuelan consulate in Brickell Wednesday morning and hundreds more gathered at Doral Park in the afternoon.

"I want freedom of my country. I want to stop the killing of the youth," a protestor said. "The kids have no food."

Venezuelan civil society, represented by different organizations, were out in force backing the President of the National Assembly of Venezuela, Juan Guaido.

On Wednesday afternoon, President Donald Trump tweeted, "The citizens of Venezuela have suffered for too long at the hands of the illegitimate Maduro regime. Today, I have officially recognized the President of the Venezuelan National Assembly, Juan Guaido, as the Interim President of Venezuela."

Trump was asked whether the U.S. would use military action in Venezuela to support the ouster of President Nicolas Maduro and he said, "We are not considering anything, but all options are on the table." 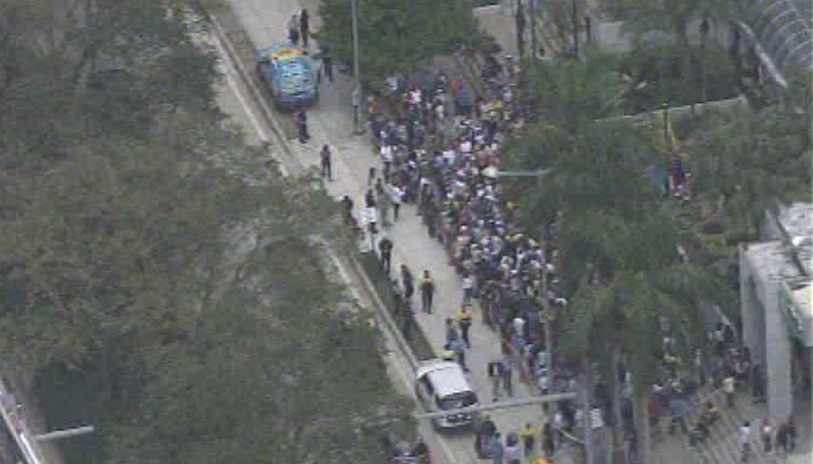 Chopper 4 was over the scene in Brickell this morning, where hundreds gathered.

"Brothers and sisters, know that violence is the usurper's weapon, ours is the voices of millions of Venezuelans that today will meet in the streets, in peace for Venezuela," Guaido said in a tweet Wednesday morning.

At Doral Park, thousands gathered to protest against Maduro.

"Venezuelans in the country need to know that they have the support of other Venezuelans living outside the country," Duzenia Rodriguez said.

Others were celebrating the new interim president.

"We can't even describe the feeling that we feel right now. We have a new president!" said Gustavo Sanchez.

"This is a great step towards restoring our democracy, but we still have a long road to go, because Maduro and his partners will not easily give up the government," Ricardo Padron said. "We owe a great deal to the United States," he added.

Organizers said protests were being held simultaneously in more than 120 cities around the world.

They are calling for three specific objectives: A stop to the usurpation of power by Maduro, a transitional government and free elections.

The protests were taking place on a highly symbolic date for Venezuelans. Wednesday marks the 61st anniversary of a civilian and military uprising that overthrew the last Venezuelan dictator, General Marcos Perez Jimenez.

"We are with you. We stand with you and we will stay with you until democracy is restored and you reclaim your birthright of libertad (freedom)," Pence said in a video posted on Twitter.

Pence said the United States maintains that Maduro "is a dictator with no legitimate claim to power" and reiterated the administration's policy in support of Juan Guaido and his efforts to declare Maduro's presidency illegitimate and establish a transitional government.

In response to Pence's comments, Maduro called for a "total, absolute revision" of Venezuela's diplomatic relations with the United States and said his government will take "political, diplomatic and defense decisions" in defense of the country's democracy.

"Never before has an official of the highest level come out in the name of his government, he spoke on behalf of the President of the United States, to say that in Venezuela, the opposition must overthrow the government," Maduro said in a televised message.

Wednesday's protests are expected to be the largest demonstration since 2017. Thousands of protesters clashed with security forces for months, accusing Maduro of imposing a dictatorship. More than 120 people were killed in protest-linked incidents during the unrest.

On Tuesday, a day before this week's planned demonstrations, the Venezuelan National Assembly advanced efforts for an amnesty policy for civilians and military officials who would rise up against Maduro's government.

On Monday, the Venezuelan Supreme Court ruled the National Assembly is illegitimate, and that no law discussed in the legislative body holds any legal value.

Maduro has continued the huge social welfare programs and price control policies of Hugo Chavez, who steered the country toward socialism before dying in 2013. Through nearly a decade of mismanagement, Venezuela squandered its profound oil wealth, leaving its economy in tatters and Latin America reeling from an unprecedented mass exodus of migrants in search of food and medicine.

The United Nations estimates as many as 3 million Venezuelans, mostly young people, have fled since 2014. Many of those have fled on foot to Colombia or Brazil.

South Florida is home to thousands of Venezuelans.