Now, however, one local pharmacy is being accused of taking advantage of the increased demand for tests.

"I only needed them so my son can go to school, and this whole town has been scrambling for them and it's impossible to find them," said a mother of two, who was identified on camera, that was desperate to find some testing kits.

Through friend, she'd heard that Kramer's Pharmacy in Agoura Hills was selling them. The store has big signs out front advertising the tests, and when she went in, she asked for two of the at-home tests.

"They told me it was $45 and I saw that the kits were actually pieced out one by one, because I have bought them before and they were actually selling them to me from the open package with a xeroxed copy of the instructions, which didn't seem right to me," the mother of two said.

Those same tests, sold in pairs, retail for less than $20, so about $8 a test on sites like Amazon and Walmart. Kramer's was selling tests for more than double.

"It's just wrong and unethical," the mom said.

Over the weekend, Governor Gavin Newsom signed an executive order aimed at combatting price gouging for the at-home test kits.

"A seller cannot increase by more than 10% the amount that they're charging for a test kit versus what they charged before the governor's order and if they weren't selling it before, they can't charge more than 50%," said City Attorney Mike Feurer.

Feurer said his office is currently investigating retailers for price gouging COVID tests and he wants to hear from anyone who thinks they've been a victim.

"If our viewers are in the City of Los Angeles, we will follow up. If they are not within the city, we will refer them to the appropriate authority. 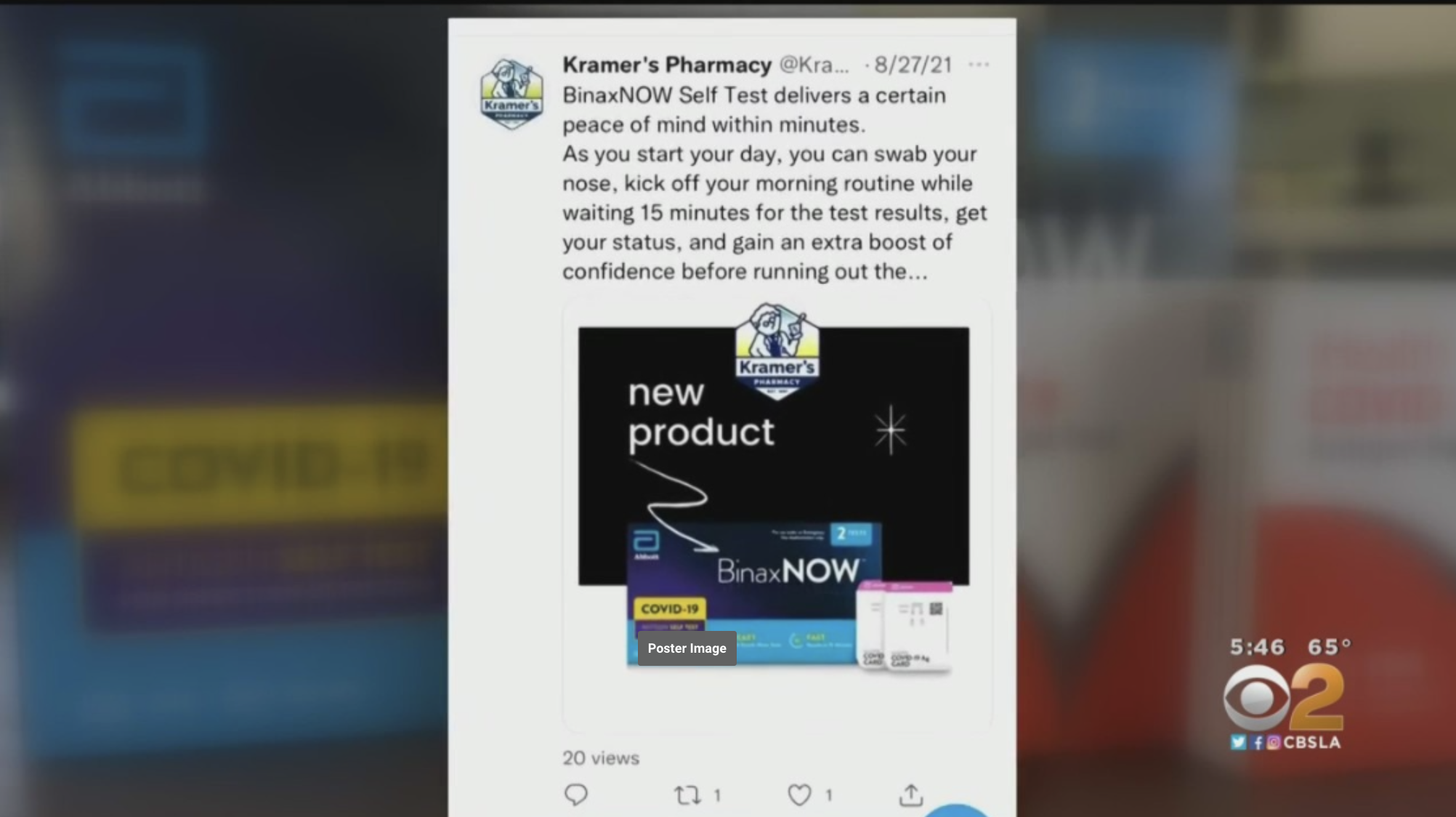 As for Kramer's Pharmacy, the owner insisted to CBSLA that he is not illegally inflating his prices, saying he had to pay extra for shipping and to staff enough workers to sell the in-demand tests. He said he didn't sell the tests before December, so he can raise the price by 50%, but CBSLA found a tweet from Kramer's official account from back in August advertising the self tests.

When asked for an invoice to show what the pharmacy paid for the tests, CBSLA received an email from the pharmacy's attorney saying Kramer's "complies with the executive order and "has not broken the law." The attorney's email, though, contradicted the owner's statement that the pharmacy just started selling home tests, but assured CBSLA that the owner had not raised the price of the testing kits by more than 10%.

In full, the attorney for Kramer's wrote the following:

"We are thankful for your investigative work and reporting and, as a result, protection for this community and its individuals. Kramer's is a family owned and operated local business that serves the Conejo Valley and Los Angeles and Ventura Counties. We are proud to have served and be a part of this community for 40 + years, and most recently during COVID-19 have offered in-location vaccinations and also supplied, for purchase, at home test kits since the fall of 2021 (well before December 1, 2021).

We are familiar with the laws in California that protect the public and are likewise aware of Governor Newsom's Executive Order N-2-22 (hereinafter "the Executive Order"). We retained legal counsel to audit, among other things, our pricing practices and we are pleased to report that it is counsel's opinion that Kramer's sale of COVID 19 at home tests kits complies, in all respects, with the Executive Order. In other words and simply put, Kramer's is not breaking any laws, including but not limited to the Executive Order.

Kramer's would like its customers and this community to know that it is offering, among other things, a walk-in COVID clinic, no appointment necessary, Monday-Friday 1 pm - 4:30 pm."

In addition to prohibiting an excessive price increase on at-home testing kits, the governor's executive gives more power to state and local prosecutors to go after sellers who are price gouging, and violators can face thousands of dollars in fines.