BOSTON (CBS) - One down, one to go…for this week anyway.

The ice and rain is headed out to sea and now we turn our attention to yet another major winter storm which has already prompted watches and warnings to be posted from Texas to New England. Here we go again.

I don't think there is any doubt that when all is said and done and the flowers are blooming this spring we will look back at this stretch of weather as being our most active and impactful of the entire winter.

Judging from the response on social media, it didn't seem like there were too many fans of the ice and rain in the last 24 hours…in fact, we had lots of folks saying they would prefer snow. Well, your wish is my command!

Our next storm will start making headlines on Wednesday as it dumps more snow on Texas and the Deep South. On Thursday, it will look like an elongated string of rain and snow, stretching from about New York City down to the Florida Panhandle. It will never really consolidate into one, powerful storm center, at least not until it has long passed the East Coast. So this isn't a case of bombogenesis, heck, I would hesitate to even call it a nor'easter. There will be very little wind or coastal concerns, it is really just about the snow. 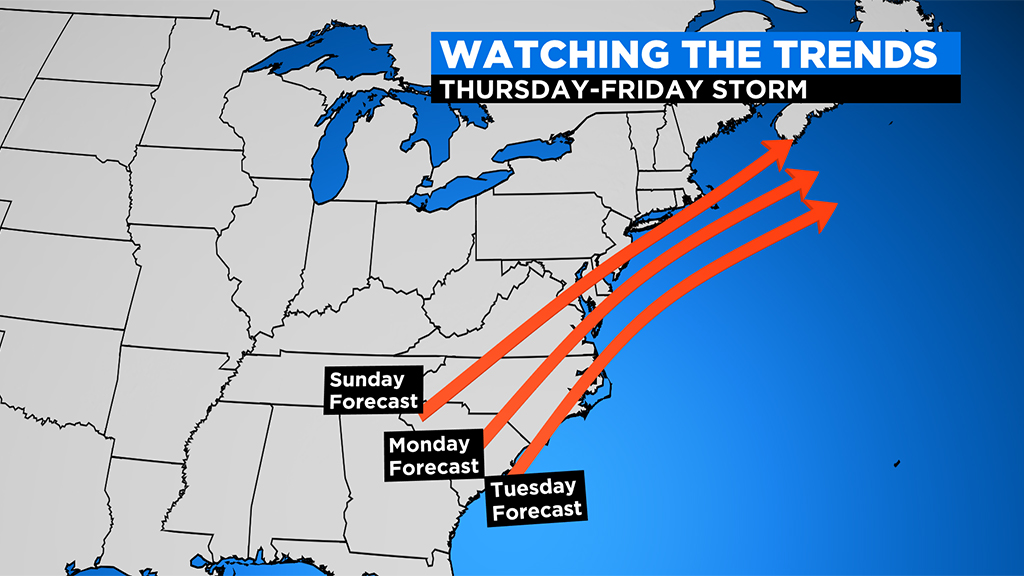 As usual, there has been some disagreement over the last few days as to the final fate and track of this storm. What is important in the days leading up to a storm are trends. Are models "trending" one way or another…weaker or stronger…a track closer to the coast or farther south. Typically when we are more than 48 hours away from a storm's beginning, these are the things most important to our team. Well, there is a definite trend amongst models over the last few days.

The storm track has been getting progressively farther south, the storm has been looking weaker and more "stretched out" and the airmass over us has been trending colder and colder. All of these things lead us to our current forecast which is for mainly snow for most of our area and generally light to moderate intensity.

First flakes will arrive from the south Thursday afternoon and evening. It appears that the steadiest snow and majority of the accumulation is likely to happen overnight Thursday into early Friday morning.

Snow may linger for a good portion of the day on Friday but it looks mainly light with very little additional accumulation during the day.

For now, this does not appear to be one of those intense banding situations where you get several inches of snow in an hour.

Instead, this storm may be more of a gradual, light to moderate snow event, accumulating slow and steady over a period of 12-24 hours.

Widespread 4-7" for a good portion of southern New England. Lighter and fluffier to the northwest of Boston where temperatures will be coldest and a heavier weight closer to the coast and over southeast MA.

2"-4" along the immediate South Coast and Cape Cod (due to a little mixing and heavier, wetter snow). This area is of particular focus as the track of the system moves southeast. If that trend continues, the higher range (4-7") may include the Cape and even the Islands. This is the range that may fluctuate through Thursday morning as the event comes into view. That said, 2-4" is still expected for southern New Hampshire. Values really drop off north of the Keene to Manchester line. Light and fluffy up that way just less moisture to work with being farther away from the storm.

Coating to 2" on Nantucket due to the likelihood of mixing with rain.

WHEN DO WE GET BACK TO "NORMAL":

I got this question from a few folks on Twitter this week. I have news for you…this IS normal! In fact, Boston is currently running just a few inches above average for snowfall in the month of February and for seasonal snow totals. Perhaps a few years of relatively snowless winters have lulled some of us into a false sense of weather security! "Normal" is always tough to define in weather.

Our averages are really just the middle of extremes. Think about it this way, in the last 10 years alone, Boston has received anywhere from 9.3" to 110.6" of snowfall in a given season. Our average or "normal" amount for a season in Boston is about 48.7". Sure, some years we actually get close to that number (perhaps this year in fact). But for the most part our wild swings in weather tend to average out in the end. So, if you are tired of this stormy, snowy weather, just know that it is all "going in the bank" and quieter days will come to balance things out eventually.