BOSTON (CBS) -- First we had raindrops falling on our heads; now it's acorns. But why?

We started talking about this after WBZ meteorologist Barry Burbank posted a blog about all of the acorns at his house, and it struck a chord. People started commenting and shared his blog, so we went out to see what's going on. 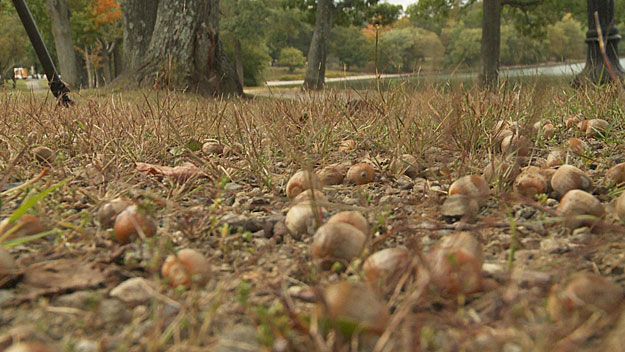 "They're fun to kick and squash between my feet, and they're kind of pretty," says one woman taking a walk around Jamaica Pond on Monday. The acorns are pretty and plentiful. It's a bumper crop.

Roger Wrubel at Mass Audubon's Habitat and Education Center in Belmont says it's all part of a cycle; an irregular cycle.

"Probably from about two-to-five years, oak trees will produce lots more acorns than they usually do," he says.

And the oaks know what they're doing.

"The tree wants to produce young trees, so by flooding the system with acorns in one year, it overwhelms the predators that are out there," says Wrubel. So squirrels and other critters won't be able to eat all the acorns, ensuring that many will become oak trees.

But there could be a downside. Deer and mice like acorns so they'll flourish, and since they often carry ticks that carry Lyme disease, watch out next spring. But don't worry about one thing: more acorns does not signal a bad winter to come.

"There's no correlation between the amount of snowfall or the temperature with acorn production. So we don't have to worry about that one," says Wrubel.