BOSTON (CBS) - It won't be a blizzard.  It won't be a nor'easter.  There will be no talk of bombogenesis.  So what will it be? A little frosting on our snowy landscape and a pain in the neck for commuters Tuesday evening.

Yet another snow storm is coming, and while this one isn't very large, it will pack a quick little punch on Tuesday afternoon, hitting southern New England square in the face.

This has been a snowy month for sure. In fact, snow has fallen on 9 of the first 16 days this month, accumulating up to 20 inches in Boston already with still a ways to go. In an average February, we see about a foot of snow, so we are already well above the norm and rising.

So, once again, let's take you through inch-by-inch on Tuesday.

The first flakes may fly as early as mid-morning on Tuesday with some weather models indicating a light wind off the water producing some very light flurries near the coastline.

The steady snow will arrive late in the morning in western and central Massachusetts and around noon - 1 p.m. in eastern Massachusetts. The snow will be steady and heavy at times in the afternoon.

Snow rates could exceed an inch per hour between 2 p.m. and 7 p.m. on Tuesday, covering many of the roads in white just in time for the evening commute.

Also by this time, a rain/snow line will make progress from south to north, changing the snow over to rain over Cape Cod and the Islands and also in parts of southeastern Massachusetts. This will limit the snow totals down there to only 1-to-3 inches for this event.

The rain/snow line will make it just about to Boston by 5-to-6 p.m.

Boston should top out around 3-to-4 inches of heavy, wet snow.

North and west of Boston, this will be an all-snow event, with final totals between 3-to-5 inches with a few locations in the Worcester Hills and southern New Hampshire coming in near 6 inches. 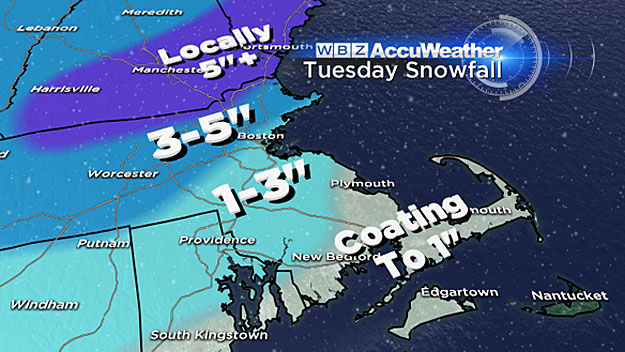 The rain and snow will taper off between 7-to-10 p.m. and we can safely say good bye to the white stuff falling from the sky for another week or so at least.

We get a "February thaw" to finish the week.  Temperatures will rise into the 40's for several days following this storm.

The pattern will remain active with precipitation likely at times, but it will not be cold enough for snow until sometime AFTER this coming weekend.