Matthew has been stacking up some accolades over the past couple days. The strongest Atlantic storm since Felix in 2007. The most ACE (accumulated cyclone energy) of any Atlantic storm so far this year. The longest-lived Cat 4/5 hurricane on record in the eastern Caribbean (<=20°N, 75-60°W). Now it's the real deal as the storm starts to threaten land and homes. It's continuing to bring torrential rain with potential for devastating mudslides, flooding, and hurricane force winds to Haiti - a nation with little ability to protect against natural disasters. And it will become the first Major Hurricane to make landfall in Cuba since Sandy in 2012 as it grazes the far eastern tip of the island. And from there, the Bahamas. All of this has fortunately been well forecast for days, allowing nations to prepare. It has always been what happens *after* the Bahamas that has been a big question mark, and part of that is starting to come into focus. 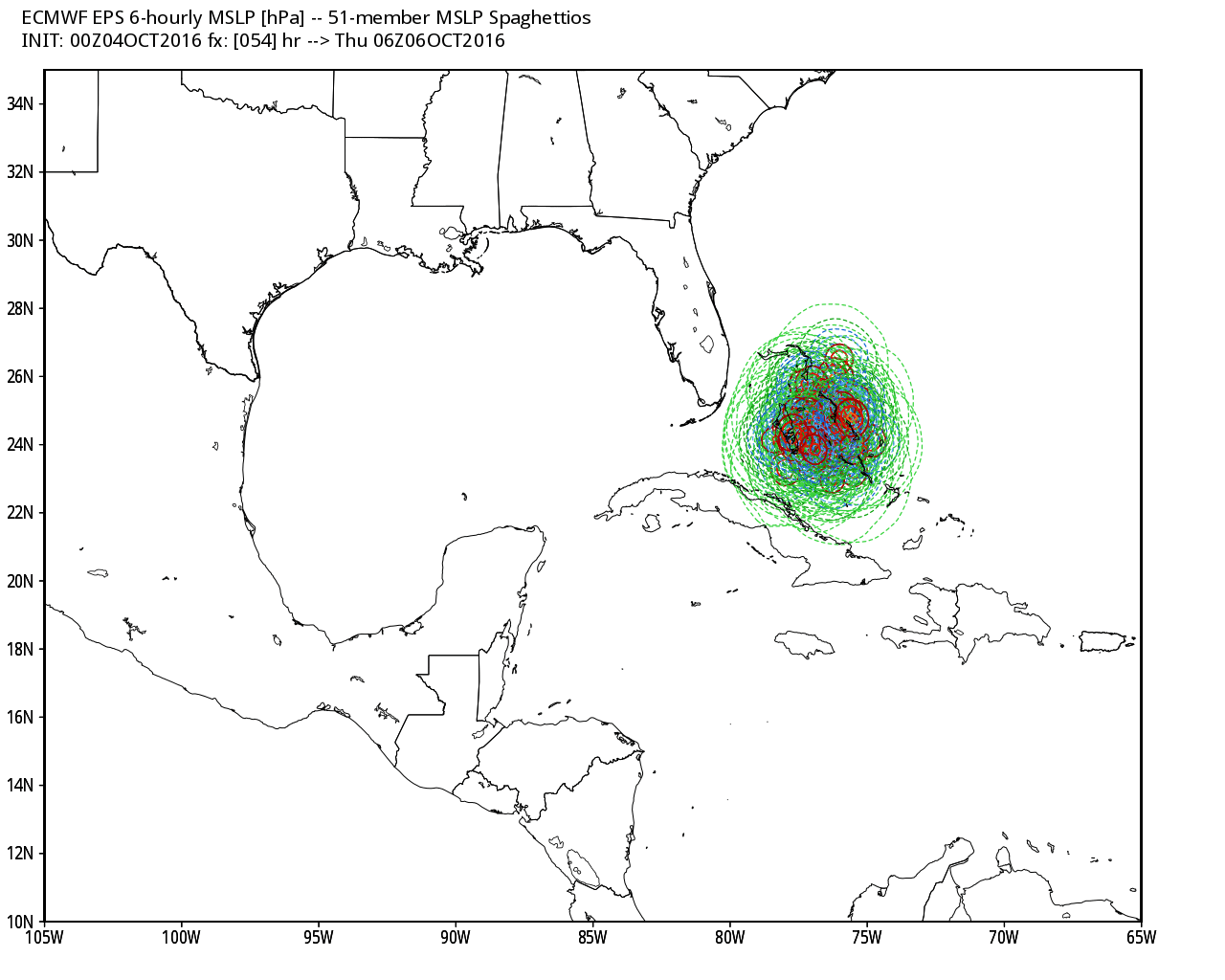 ECMWF EPS members showing a tight cluster of solutions across the Bahamas. Most guidance agrees with this position. Source: Weatherbell

Let's start with Tuesday night through Thursday. There is excellent agreement that Matthew will rake the Bahamas as a Major (Cat 3+) hurricane. And worse, it will be a slow mover. There is an extremely favorable environment over the top of Matthew and below it (low shear, very warm water), which should minimize any weakening that land interaction might induce. There's little reason to expect the storm will be any weaker than Category 3, with winds over 110mph, as it moves across the Bahamas. In fact I won't be surprised if it sits at Category 4 status for the majority of the time.

After that, it's time to look at U.S. risk. There has been a shift west in recent model runs, bringing Matthew closer to the Florida coast late this week. And from there it's a crawl along the entire coastline from Florida to North Carolina.

Now it's worth pointing out that there is a big difference between a hurricane plowing directly into land at a solid speed, and a storm that moves parallel the shore. A storm that comes in with velocity and makes firm landfall can add to wind damage in spots and also bring in greater storm surge. Fortunately, it does not appear that is going to be the case. But on the flip side, a storm like Matthew moving along the coast will include more communities. So many more are expected to be affected than if it went straight into land.

Will Matthew ever make actual landfall? That's a valid question. It's certainly possible that the actual eye will never move onshore anywhere. It may stay within 15-50 miles of the coast without crossing over onto land. It's important not to focus solely on whether or not it makes landfall, because a close pass will still bring serious impacts. At the very least, all of the southeast coastline should prepare for huge waves and rough surf. That's a given. It should also be prepared for some tropical rain bands coming ashore, which always come with a risk of spin-up tornadoes and locally heavy rain. The biggest question mark is wind speeds. Matthew is currently a compact storm when it comes to wind. The hurricane force winds extend 60 miles from the center. So a storm that stays 60 miles offshore may keep the majority of destructive winds over water. A wobble 60 miles west would bring extremely damaging wind roaring ashore.

You end up with a messaging conundrum. Those 60 miles are the difference between a very damaging billion dollar disaster, and a 'Oh, that's all you got? What a waste to get prepared' situation. Never a fun position to be in if you're a meteorologist or an emergency preparedness official. And that's the line forecasters are walking from Miami to Nags Head. At the very least, I think you can expect travel disruption and some airline cancellations for locations on the coast by late this week. 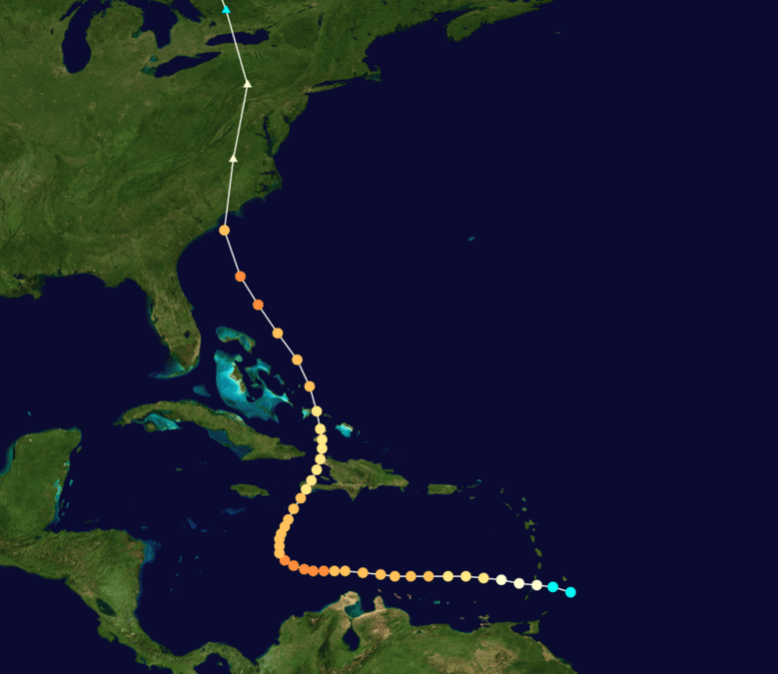 The course of Hurricane Hazel in 1954, the last time a hurricane made landfall north of Florida during October.

Now if that eye DOES cross the coastline, it will receive yet another accolade. A hurricane has not made landfall north of Florida during the month of October since Hazel in 1954. Sandy become a post-tropical storm just hours before landfall, so there's an asterix on that one. But the point is that conditions are rarely favorable for a hurricane to hit the East Coast this time of year. The jet stream is often more active, producing shear and pushing storms out to sea. And on top of that the water is cooling. So we'll see if Matthew can accomplish that fate. Good news is that Matthew will not race inland like Hazel did - a storm that is remembered all the way up into Canada! Any landfall would be brief before heading back over the Atlantic. 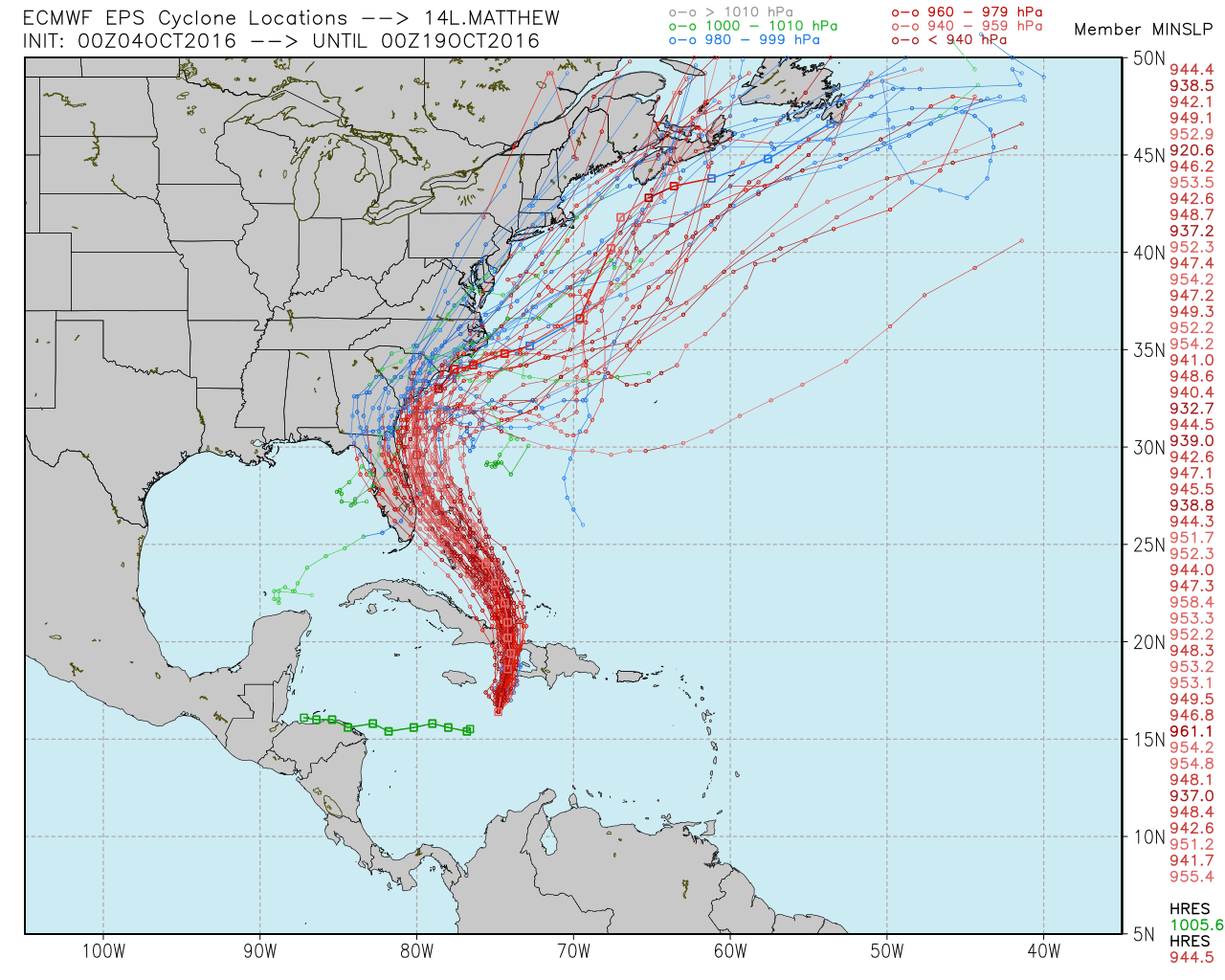 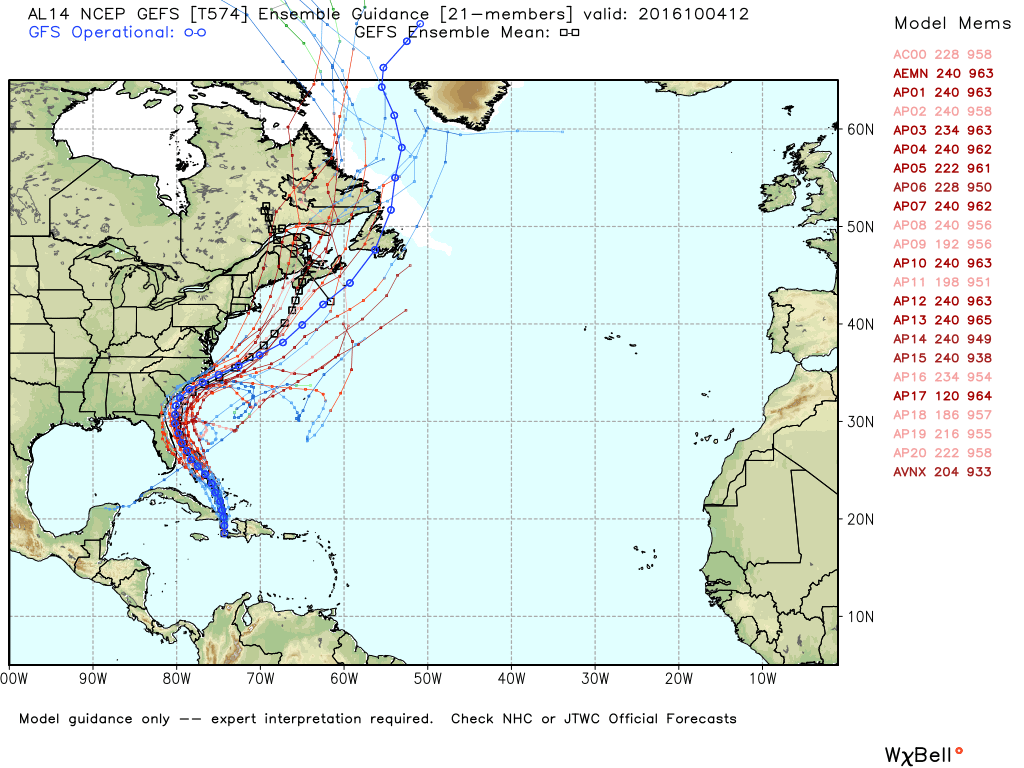 12z EPS and 12z GEFS storm tracks for Matthew. The vast majority turn offshore once reaching North Carolina, but there are still some tracks that come very close to the coastline as Matthew heads north. The difference here has to do with how the incoming trough western trough interacts with the hurricane. The FASTER Matthew moves, the more likely it stays close to the coast. The SLOWER it moves, the more likely it goes out to sea. Source: Weatherbell

Let's pick up the story from North Carolina. By Saturday, Matthew should be on or along the North Carolina coast, and will be undergoing some changes. For starters, the wind field should be expanding. Instead of a tight tropical core of winds, it will start to feel the impact of an approaching trough from the west and begin extra-tropical transition. In other words, it will start the process of going from a hurricane to a nor'easter. So very strong winds, heavy rain, and coastal flooding will all be possible for eastern North Carolina. This will be exacerbated by the fact that September was a soaking month for that area, with some areas receiving over 10" of rain. Much easier to flood and bring down trees. 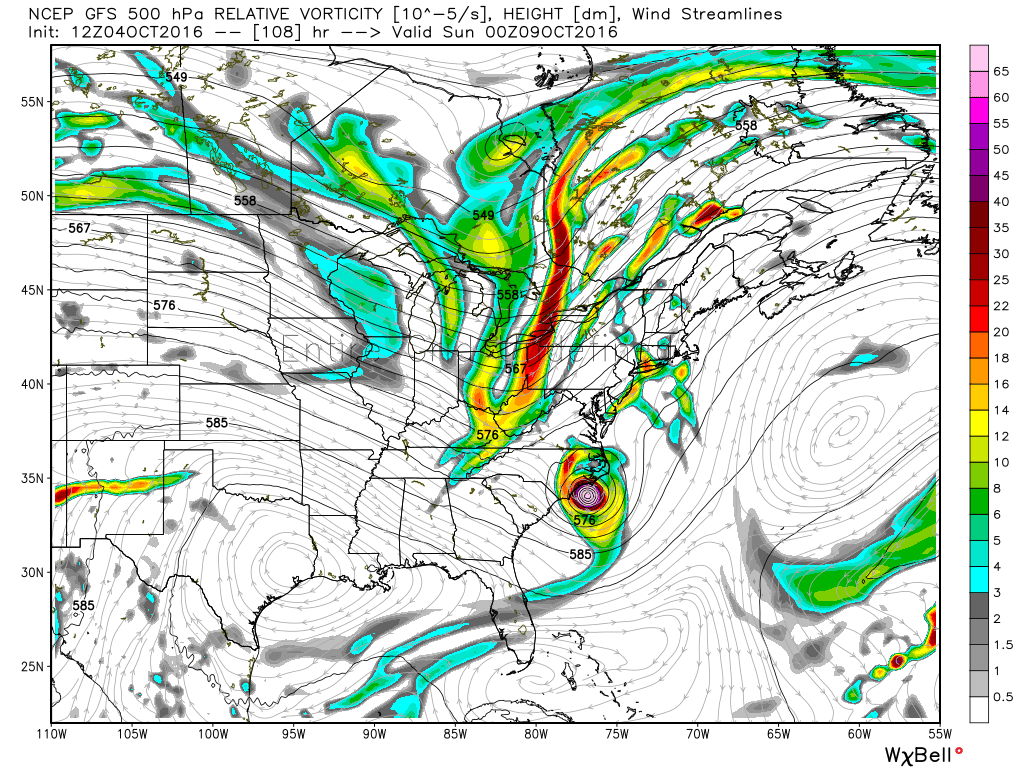 This is the energy we'll be watching for the upcoming weekend. The big question is whether it will absorb Matthew and steer it right toward us, or push it out to sea. Source: Weatherbell

From this point it all comes down to how Matthew interacts with an incoming trough, which is currently moving down through the Gulf of Alaska. Some guidance allows the trough to 'capture' Matthew and pull it up the coast as a powerful Nor'easter, while others push the storm out to sea as the trough charges in. The closer we get to 'game time, the better models will resolve this trough and how it will approach us. The trend has been south of the region, passing SE of Nantucket. And that's what I'm going with at this time. Climatology also suggests this as a more likely path. 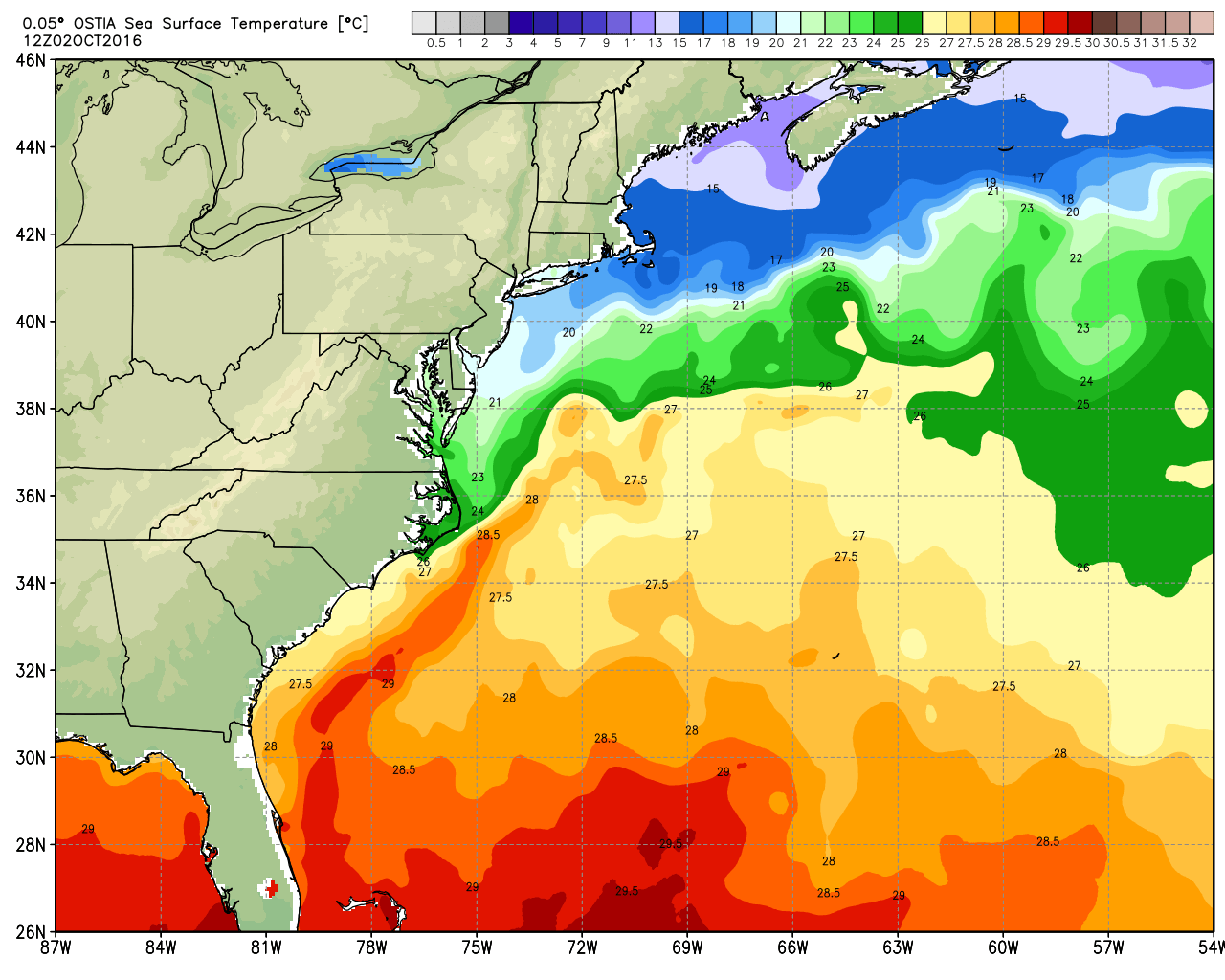 Current sea-surface temperatures show the sliver of chilly water that has been pushed down the coast by days of onshore winds. This is in ºC, and as a guide 21C = 70F. Source: Weatherbell

I say nor'easter because I doubt Matthew will still be tropical by the time it gets here. Days of onshore winds have really helped to cool down coastal waters, which are not very supportive of anything tropical north of the Outer Banks right now. Since hurricanes feed on warm water, this would lead to a rapid weakening of its tropical characteristics. At the same time, the interaction with the jet stream will expand the wind field and allow the storm to stay strong. So I would say that our worst-case scenario is a damaging nor'easter with very strong gusts and torrential rain. 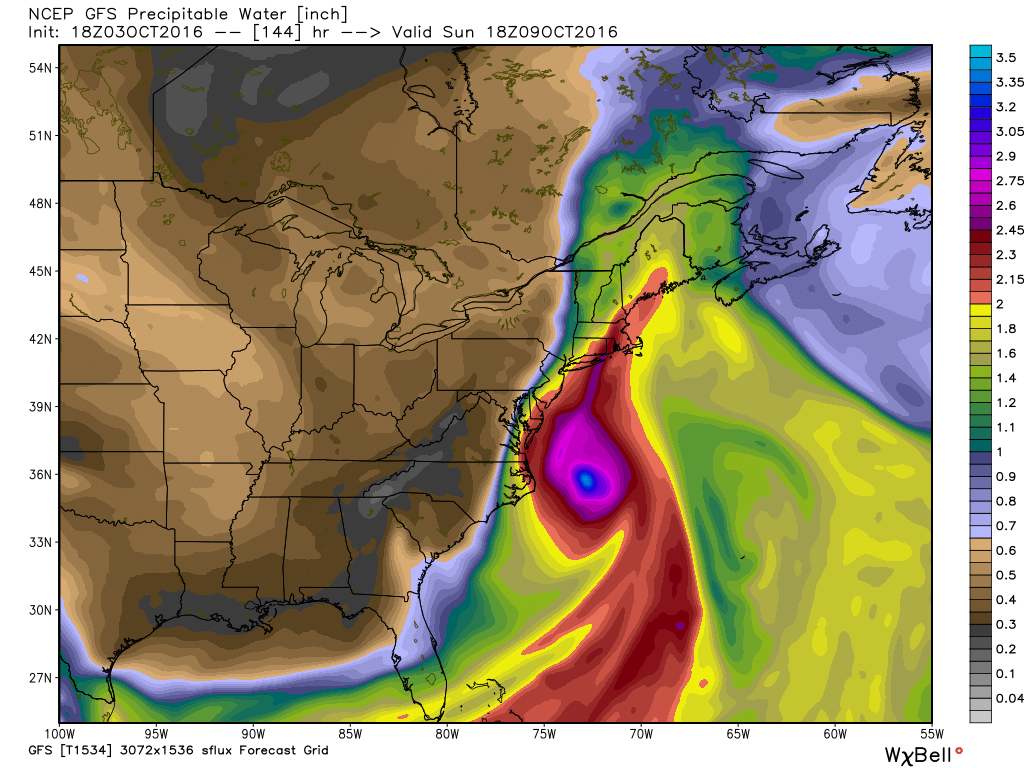 Which brings me to a final variable to look at - rain. We want it, but we don't want the wind, amiright? Well if that's the case, then what we want is a PRE - predecessor rain event. This occurs when a tropical system links up with an approaching front, like we should have late this weekend. It ends up producing a heavy rain event that in many cases makes for some really nasty flooding. This year may be a little different for us, because of the drought. We have an exceptional amount of space in our rivers, lakes, and ponds to accept water. Many streams are completely empty at this point, or barely flowing. And it will be dry for a week leading up to this. Below is a look at flash flood guidance, which says we can easily handle 3-5" of rain in just a 6 hour window. A PRE could, if a high-end event, lead to even more rainfall than that. But I think the main theme to take away is that you would certainly get some road flooding if we had a torrential rain event, but it would take a whole heck of a lot to produce major/destructive river flooding. I'd actually root for a PRE and 3-6" of total rain out of this storm. If that happens, some road and localized flooding would be a small price to pay for drought relief.

There's no point in jumping on any single model run at this point, or for raising the 'panic!' flag in New England. We are still talking about a storm well out in the future and we'll still have several days of advance notice if we wait a couple to make sure we have a good grip on the forecast. That being said, here are some bullet points so far as New England is concerned for those that have some early questions.

Things have sped up a bit over the past 24 hours. We'd be talking about Saturday PM into Sunday this weekend. Leading up to that, we have a stretch of dry and quiet weather. So Matthew will really have all our attention for the next several days.

Not wise to speculate this far out, considering the storm may head completely out to sea. That being said, I think we can expect some strong gusts (at the least, 40mph+) over the Cape and Islands when Matthew passes. The reason I say that is that it should have a large wind field, and even an out to sea solution should clip us with wind.

There's some good news here - astronomical tides are quiet low late this weekend and early next week. It would take a direct hit to really produce significant coastal flooding. The timing of these storms and how they link up with astro tides can really have a huge impact on the flooding we end up with. At this time, I'm not expecting a major flood event.

The *potential* is there for some drought-denting rain across the region. One of two things needs to happen. 1) the storm comes up the coast and hits us 2) a PRE sets up and soaks us as Matthew flies by out to sea. In either of those situations, we could easily see over 3" of rain with possibly even 6"+. The next few days should give us some clarity on whether or not this pans out.

Don't change 'em yet! Five to six days is an eternity in tropical forecasting, and much can change in that window. Forecasts past 5 days are notoriously a crapshoot. So expect Wednesday to be the day we can really say that you should start making preparations or that it will be a glancing blow/miss. Before that, it's wait and see time.