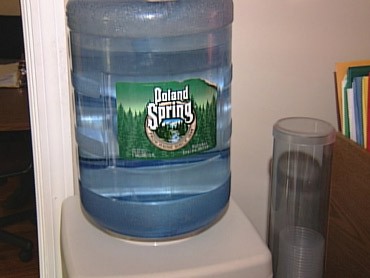 The chemical Bisphenol A, or BPA, has been in the news a lot lately. It's used, among other things, in hard plastic bottles and the lining of aluminum cans. And there are concerns that it might lead to serious health problems.

That prompted Kevin Roberto of Arlington to ask, "If BPA is in large water cooler bottles, such as Poland Spring, is it safe to drink?"

It's a complicated question to answer.

Roberto called the company with his concerns.

"I said, 'Do any of your water bottles contain the BPA chemical in them?' and he said, 'Just our 3 gallon and 5 gallon bottles.'"

Those are hard plastic bottles, not the soft individual bottles, which do not contain BPA.

Roberto also asked Poland Spring about studies that have linked BPA to heart disease, diabetes, and breast cancer, "He said there's no documentation or proof that that's true."

And until this month, the Food and Drug Administration had agreed, saying BPA was not a health risk. But now, the agency is taking a fresh look at the research.

"It should be taken off the market," says Massachusetts Congressman Ed Markey.

Markey has filed a bill that would pan BPA from all food and beverage containers. "…especially children, babies, should not have this chemical in their baby bottles, but other products as well, and I just think the day of reckoning for BPA has arrived."

Six makers of plastic products for children have bowed to the pressure and have voluntarily stopped using BPA in things like baby bottles and sippy cups.

But the plastics industry is standing by its use of the chemical.

"The science of Bisphenol A has been comprehensively reviewed around the world by many government bodies, and there is a consensus view that this chemical, Bisphenol A, is safe for use," says Steven Hentges of the American Chemical Council.

Nestle Waters, the owner of Poland Spring, says its latest tests show nearly undetectable amounts of BPA in 5-gallon bottles, and that a child would have to drink 570 liters of water a day to reach an unsafe exposure level established by the Environmental Protection Agency.

We asked Congressman Markey why if companies that make baby bottles have stopped using BPA, why other companies don't follow suit.

"The companies don't want to have to go to the expense to find a substitute chemical that can perform the very same job," he said.

So for now, consumers like Kevin need to make up their own minds. "I'm not going to take the risk in using that."

There hopefully will be some answers soon. The FDA says it will take weeks, not months to review the BPA research.

Poland Spring also told us that one of the big concerns surrounding baby bottles was that they are often heated. And research shows heat increases the amount of BPA that leaches into the liquid. Poland Spring says that is not an issue when it comes to their 5-gallon water cooler bottles.