Below average temperatures? December snowfall in the forecast? Yes Virginia, there is a Santa Claus! Last December ran 3.7º above average. The one before that? A whopping 5.3º above average. Those two Decembers featured a combined 3.4" of snow in Boston. But this year it's back to basics. Chilly air and snowflakes will be the rule for the next several days at least.

First up - the frigid air. As of this writing at 9pm, some towns were already as low as 3º! That's cold any way you slice it. Overnight lows will be in the 0s and low 10s...for many the coldest night since last winter. That sets the stage for another very chilly day tomorrow with highs in the mid 20s. 850mb temps remain in the -15C range, and a mix of sun and clouds will not do much to promote daytime heating. A weak cold front will head through during the early afternoon, bringing a few snow showers and a wind shift from SW to NW winds. Other than that, not much fanfare with its passage.

That brings us to the incoming wintry weather. Not much change to what I've been alluding to the past couple of days. There are still a few discrepancies in the models re: amounts and exact track, but I think the overall idea is the same. It should be the most significant event of the season so far for most towns, a plowable snow event, and some spots will have the shot at over a half foot of snow by Sunday morning.

The models have shifted, in general, a bit more toward the SE. That's good for snow lovers. It means more cold air should be able to hold on instead of warmer air invading into the region. I still think many areas of SE Mass will change to rain for a time, but all of this cold air firmly entrenched should keep much of the interior all snow, unless something changes over the next 48 hours. The 18z GFS came in juicier with a lot more snow forecast, but one model run does not typically force us to make changes. You'd need to see several runs to perhaps change the forecast. So for now, I'm keeping the same ideas on snow totals.

With the same boundary that's passing through Friday afternoon still nearby and increasing amounts of forcing/moisture in the neighborhood on Saturday, I think much of the day could have flakes in the air. The morning is likely dry, but by lunch some snow should start to fly. Snow will generally be light through the afternoon and early evening hours, but with the cold temps in the 20s and plenty of antecedent cold air (multiple days without going above freezing) that light snow will probably stick. Sanders and salt trucks may need to start up fairly early. That being said, I wouldn't cancel any plans before 5pm at least. It's snow that most hearty New Englanders should be able to handle without too many issues.

As the low begins to intensify and develop into a stronger coastal storm, snow intensity will pick up on Saturday night. Unfortunately, this probably coincides with a lot of holiday parties, get togethers, and otherwise plans that are a lot more fun than sitting at home because you can't drive. Since it's still just Thursday night, I wouldn't cancel plans yet. But it's looking likely that driving around will get a lot more treacherous Saturday night, especially late night. Batches of snow and mix will continue through the overnight into early Sunday morning. I think that most of the precipitation should be done by noon Sunday at the latest, since there's little blocking over the Atlantic to box the storm in and slow it down.

The RPM (rapid precision model from WSI) and NAM are farthest south with the storm (means more snow, less mix)...the GFS is juiciest and warmest (more snow inland, more rain SE), and the ECMWF is the quickest with the least amount of snow - as of this writing. As you can see, the models don't always exactly paint a perfect picture! They're often at odds, and so we as Meteorologists try to use a little intuition and pattern recognition to try to figure out what exactly is going to happen.

For now, I'm thinking 1-3" for the Islands, Cape, and South Coast. This is because after an initial snowfall Saturday into Saturday night, enough mild air at the surface and aloft should nudge in to change the snow over to rain (before going back to snow late Saturday night). If the track stays a little farther south, these numbers could go up over the next 48 hours.

Around Metro Boston and into northern RI, I'm calling for 3-6". Again, a track a bit farther south would put those figures closer to 6" than 3", perhaps even a bit more. But as temperatures nudge up aloft, we may mix with some sleet or freezing rain for a time Saturday night - which would lead to the 3-6" range being a max.

One you move NW of the city and the I-495 corridor, this should be an all snow event. There could be a pretty decent 'fluff factor' too, as temperatures will be in the 20s and as mentioned before - all the cold air leading up to the storm means snow should immediately stick. Currently thinking 6-9"  here. The 'ceiling' for this event is likely around 12", which may be realized in the higher elevations of MA, NH, and VT.

You probably don't need to sound the 'French Toast Emergency' for this one and run to the store buying up all the eggs, milk, and bread. Most of the impact is Saturday overnight. It's a 'moderate' storm for Southern New England, but nothing major. Since it will move pretty quickly, only minor flooding is a possibility at the coastline. There may be some splashover, but as it stands now nothing more than that. Winds may be briefly gusty up to 35/40mph, but not long in duration so power outages are not expected to be high. But it should be the most we've seen this season, and will bring us all some quality time with our shovels and snowblowers for the first time since March. Have you missed them? 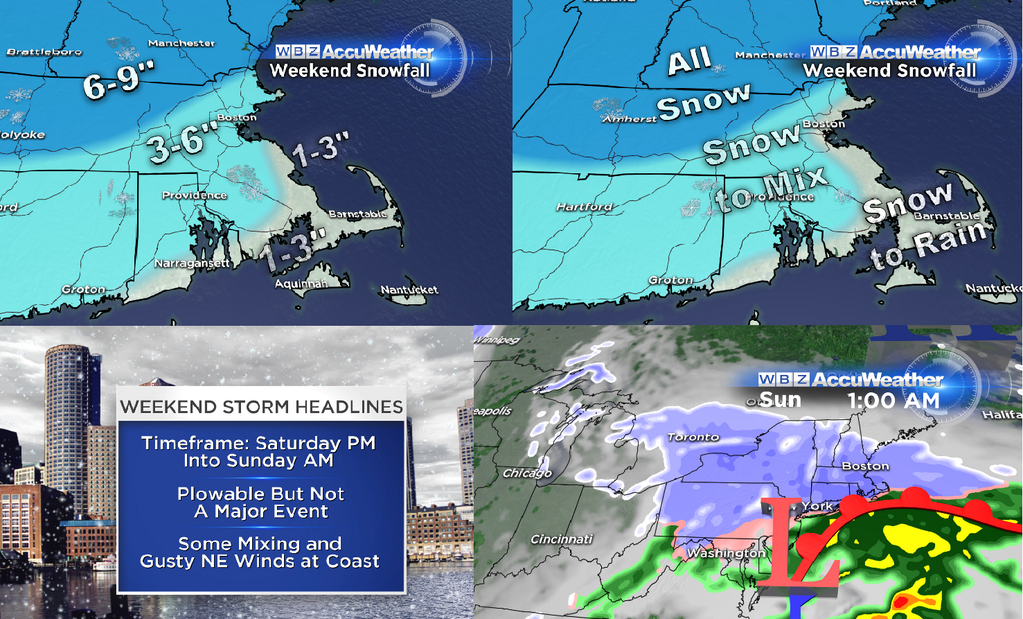 By the way...while this blog focuses on our viewing area - plenty of fresh snow will be falling to our north and west. Most areas will be seeing 5-10" of snow from this one, without any mix to muddle things up. Combined with all the recent cold air, this should be fantastic news for a lot of ski areas. Conditions should be ripe for carving by Sunday for essentially all of them, even ski areas here in Massachusetts. With at or below-average air for nearly all of next week, those conditions should linger. Plus, with less than 2 weeks to go until Christmas, this storm should ensure that many areas of New England will indeed have at least 1" of white on the ground when St. Nick makes his way to town.