Hey Eric! Need an 'Eric Explainer' on dew points and snow melt, please! What's the correlation between the two?

Good question, Claire! A lot of times you'll hear meteorologists refer to good 'snow eating' weather or high dew points chewing away at the snow pack. But why would a simple rise in humidity help to speed up the process so much?

At the center of this one is something called 'latent heat.' And that energy falls under the larger umbrella of 'phase changes.' When we're talking about water, we have something that can exist in three different states - a liquid, gas, or solid. The liquid is of course the water we drink every day or that falls from a storm. The gaseous state is water vapor, which is always in the air around us in varying quantities. And the solid state is ice.

When molecules of H20 switch between these different phases, energy is being transferred. Some of these processes require energy (such as evaporation or melting). It takes an input of energy to melt ice and snow, or to dry up that puddle left behind by a summer storm. When breaking up those icy bonds, energy is taken out of the surrounding environment and in turn cools the ambient air. The same happens when water evaporates. A good example is when you get out of the ocean after a swim - you're freezing! That evaporating water is taking energy out of the air around your body, and is leaving behind a chill. 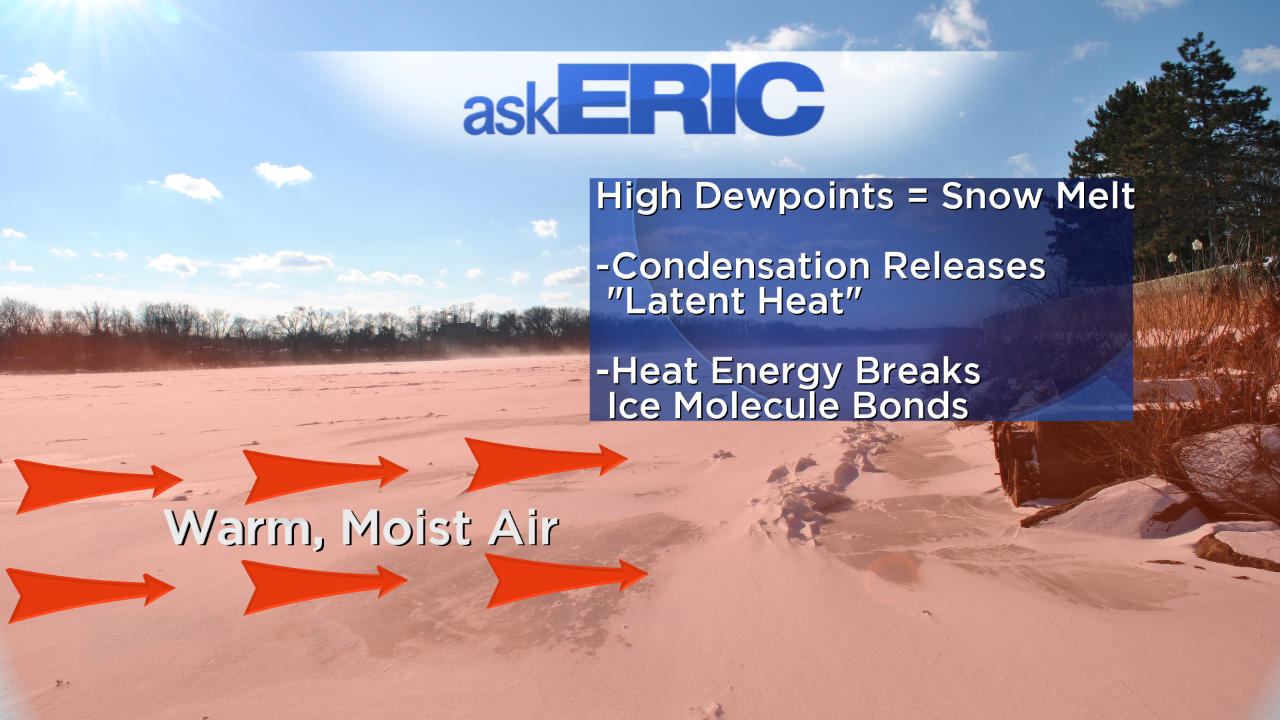 But when a molecule of water vapor condenses and takes on its liquid form, energy is actually released. This is the key to the rapid snow melt you witness when dew points soar into the 40s and 50s. The dew point is the temperature that air needs to achieve in order to condense. If you have a temp of 40F and a dew point of 40F, the air is said to be saturated and you're going to be seeing some fog, mist, rain, or snow. In situations like we often have in March, there's snow pack on the ground and milder, higher dew point air easily can cool to this point as it wafts over the snow. A condensation frenzy ensues! This is also why we tend to see a lot of fog (advection fog) when milder air invades over the snow.

Here's the real trick - condensation involves 7.5 times more energy than melting does. What does that mean? For every molecule of water vapor that condenses, 7.5 bonds that are holding ice molecules together breaks. It works even better if there is a breeze keeping that mild air flowing up over the snow. That way there is a fresh supply of moist air condensing over the snow pack, releasing its latent heat and helping to power the melting process.