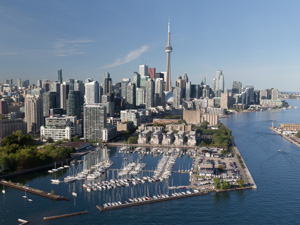 Are you thinking of planning a long weekend getaway to Toronto? If so, consider yourself lucky to have an opportunity to visit the largest city in all of Canada and one of the largest in North America. Home to a diverse population where more than 180 languages are spoken, Toronto is a world-class destination for arts and culture and boasts more than 8,000 restaurants. Here is a practical guide for the best of lodging, dining and attractions that Toronto has to offer.

The majority of visitors flying into Toronto will arrive at Toronto Pearson International Airport, the busiest airport in Canada. Toronto Pearson offers a number of ground transportation options including car rentals, shuttle services and taxis. However, the airport advises visitors that travel time to reach Toronto may take longer due to road construction. Perhaps the best option is to take the new Union Pearson Express (UP Express), recently launched in June. Trains depart every 15 minutes and estimated travel time from the airport to Toronto's Union Station is 25 minutes.

Amtrak provides daily train service to Toronto from New York's Penn Station via the Maple Leaf route. This route has several stations along the way for passengers to board, including Albany, Syracuse, Buffalo and Niagara Falls. A connecting train to Penn Station originates from Washington DC, with stations at Baltimore, Wilmington, Philadelphia, Trenton and Newark.

Related: Travel By Train For Your Next Vacation

With Niagara Falls just 90 minutes away, driving to Toronto via U.S. Interstate 190 is a popular option for many American motorists. After crossing the Canadian border, motorists will be driving on Canada's highway system, with 401 from Detroit and 405 to 407 from Niagara Falls. Other American cities within a five-hour drive from Toronto are Cleveland, Pittsburg and Buffalo.

American travelers must present a valid U.S. passport for entry into Canada. However, tourist visas are not required for visits under 180 days.

The easiest and most efficient way to get around Toronto is with public transportation. Buses and streetcars can be convenient for short distances, but the city's TTC (Toronto Transit Commission) subway system is the recommendation to avoid traffic across Canada's largest city. Only four subway lines serve Toronto, with Route 1 and Route 2 likely the only two lines needed over a long weekend. Single rides on the subway are $3 CAD or about $2.40. and a regular all-day pass is $11.50 CAD or about $9.

As would one expect in one of the largest cities in North America, there are several lodging choices for visitors. Budget travelers can enjoy rates as low as $17 per night and on the other end of the spectrum, luxury hotels can be reserved for under $300, which is a bargain compared to similar hotel properties in American cities like New York, Chicago and San Francisco.

With a diverse culture and more than 8,000 operating in the greater Toronto area, there is a great dining experience to fit every traveler's budget. Most of the acclaimed restaurants, including some of Canada's most famous are clustered within Old Toronto.

Many of the best attractions are located in or near the oldest section of the city, known as Old Toronto. With the largest collection of overnight accommodations, it's also where the majority of visitors will be staying during their weekend stay.

Easily the most visible landmark in Toronto, the CN Tower was once the world's tallest tower, building and freestanding structure. Named one of the Modern Wonders of the World in 1995, the tower rises to a height of 1,815 feet and has 147 floors. Three observation levels are open to the public including the popular Glass Floor, allowing guests to look straight down to the city streets below. The tower also features one of Toronto's finest restaurants – the award-winning 360 Restaurant, boasting a world-class wine menu from the world's highest wine cellar. In addition to the observation levels, visitors can also enjoy the exhilarating Edgewalk, enabling them to literally walk along the edge of the CN Tower or the much tamer Red Rocket movie. The iconic tower is conveniently located near Union Station, Air Canada Center, Ripley's Aquarium of Canada and Rogers Centre, home baseball field of the Toronto Blue Jays.

Even non-sports fans can enjoy this prestigious shrine to one of Canada's most popular sports and the greatest players of the game. Similar to America's Pro Football Hall of Fame and the National Baseball Hall of Fame not far from the Canadian border, the Hockey Hall of Fame operates as both a history museum and hall of fame. American visitors may not be familiar with many athletes enshrined here, particularly from the sport's golden era, but will no doubt recognize hockey legends such as Gordie Howe, Bobby Orr, Bobby Hull, Phil Esposito, Mark Messier and of course, Wayne Gretzky. In addition to hockey memorabilia and the player inductees, the top attraction is the authentic Stanley Cup, the trophy awarded to the winner of the annual Stanley Cup championships.

First opened to the public in 1914, the Royal Ontario Museum is the largest museum of natural history and world culture in Canada and one of the largest on the continent. A must see attraction for the first time visitor, the museum houses more than six million artifacts in its permanent collection, including 16 items selected as Iconic Objects. Among the most treasured holdings are the Light of the Desert cerussite gem, the 18th century painting "The Death of General Wolfe" by Benjamin West, the Bust of Cleopatra VII and the world's largest collections of fossils from the Burgess Shale. Of particular interest for families with children are the Bat Cave, Coral reef aquarium and Gordo the Barosaurus, the largest dinosaur on display in the country. Also of notable interest is the Art Gallery of Ontario, one of the largest art museums in North America, whose main structure was redesigned by Frank Gehry.

Once named the world's best food market, St. Lawrence Market is older than the city of Toronto. Located between the historic Distillery District and the Hockey Hall of Fame, the market has been operating since 1803, the market now hosts more than 120 vendors selling a variety of food items, including fruits, vegetables, meats and baked goods. The market complex consists of three buildings, most notably the North Market building currently undergoing a major renovation and just opened a temporary structure in June. The nearby Distillery District is another attraction worth seeing during a weekend trip as is the city's other leading market – Kensington Market.

After a few days of sightseeing in Toronto, a ferry ride to the Toronto Islands can offer a respite from the hustle and bustle of Toronto. Featuring spectacular views of Lake Ontario and the Toronto's skyline, the islands host the largest car-free urban community in North America. Walking and bicycling are the primary methods of transportation on the islands, along with rentals for canoes, paddleboats and kayaks, among others. The Toronto Islands are particularly popular for families with children, with such attractions as the Franklin Children's Garden, Far Enough Farm and the admission-free Centreville Amusement Park. A ferry ride from the Toronto Ferry Docks at Harbourfront Centre takes just 15 minutes to reach Centre Island.