The 2015 Grammys on CBS had its fair share of interesting moments. There was no moment more memorable than when it was announced that Beck had won the Grammy for Album of the Year. Kanye West came on stage for a second, and then went back to his seat, which brought us back to the 2009 VMA's where he did the same when Taylor Swift won the Best Female Video Award. He didn't make a speech for Beyonce this time. Beck trumped Beyonce, Ed Sheeran, Sam Smith, and Pharrell. Safe to say, America was stunned. With surprises on the mind, let's take a look at events in sports over the last year that are more surprising than Beck's victory.

Two straight Sundays to start February 2015, we were served with some shocking moments. Pete Carroll ended the Seahawks season with the worst playcall in sports history. On 2nd & Goal from the one-yard line with under a minute to play in Super Bowl XLIX in Arizona, they decided to throw the football towards the middle of the field with the best running back in the NFL nowhere to be found. The rest is history. Malcolm Butler became a celebrity with a season-ending, championship-clinching interception to give Tom Brady, Bill Belichick, and the Patriots their fourth Super Bowl title. Fans might still be running into televisions in Seattle... 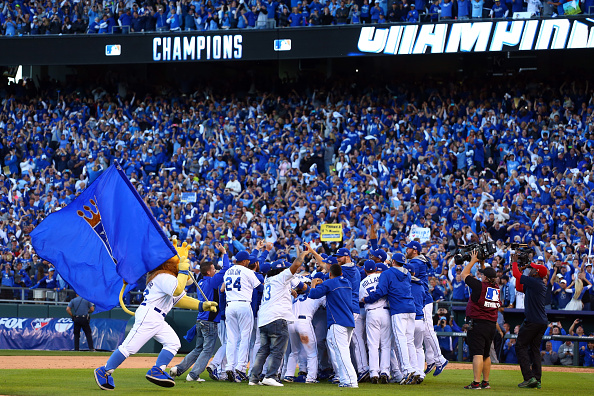 The Kansas City Royals came into the 2014 season with expectations of potentially competing for a playoff spot. POTENTIALLY. Putting Royals fans aside, there isn't a soul in the world that would have made the claim that they would win the American League and be playing in a riveting World Series. Well, everyone in America was silenced when the Royals pulled off the inevitable. The Royals rallied in the Wild Card playoff to beat the Athletics, cruised past the AL-leading Angels with a sweep and did the same to the Orioles in the ALCS. They would go on to lose in Game 7 to the San Francisco Giants, but that was as remarkable and surprising run in sports history.

3. Brazil gets destroyed by Germany 7-1 in front of home fans

When you think of 2014 and the word humility...you think of the World Cup matchup between Germany and Brazil in Brazil. In front of a rowdy home crowd, the German squad made a mockery of the Brazilians with a 7-1 blowout to advance to the World Cup Final. Not many saw Brazil winning with Neymar out, but 7-1? Rarely do you ever see seven goals, but to see it between two teams that were almost even in talent was definitely jaw-dropping. Tears were shedding from all angles that day as fans left the building in awe. Germany would go on to win the Final over Argentina.

Cleveland has always been synonymous with losing. You root for them as a sports fan, but things just never seem to come to fruition. The Cavaliers came close during LeBron James' first stint there, but since then, it has gone downhill. The Cavs finished the 2013-2014 season with 33 wins, but cleared enough payroll to have a big offseason. Their wishes came true when King James made the decision to return home to join young guard Kyrie Irving. Then Kevin Love followed suit when the Cavs traded away their future in Andrew Wiggins in a package to acquire the former Timberwolves star. The "Big Three" in Miami would now shift to Cleveland with a couple of new faces. To see the Cavs go from pretenders to championship contenders in such a short period of time was amazing to watch unfold. They had their struggles in the 2014 part of the 2014-2015 season, but this team has found its groove now.

5. Cowboys proclaimed one of worst defenses ever, go 13-5 and make NFC Divisional Playoffs

Remember when media members proclaimed the 2014 Dallas Cowboys to be potentially the worst defense of all time. Heck, I was victim to saying it on my radio show. Nobody expected Tony Romo after multiple back surgeries to last an entire season. Well, not only was the defense not horrible, but Romo lasted the entire season and led the Cowboys to anNFC East title. Behind the best offensive line in football and DeMarco Murray's breakout season, they went on to win 13 games, which included a controversial Wild Card playoff win over the Lions. They nearly defeated the Packers at Lambeau, but this time they didn't get a disputed call to go in their favor. It was astounding to see the 2014 Cowboys do exactly what they did.

For more surprises, listen to past episodes of 4th & Goal with JB & BT featuring myself and former NFL tight end Ben Troupe. Our new show titled Brown & Troupe will begin in the coming weeks and focus on all sports, featuring insight into the world of sports with player guests, stories inside the locker room, rap, music, debates, girl talk, and a whole lot more.