SACRAMENTO (KPIX) -- CBS News on Tuesday night projected that the "no" vote will win the recall election, meaning Governor Gavin Newsom will remain in office.

Most Californians voting in the recall election said they approve of the job Newsom is doing as governor, and those who did overwhelmingly voted against the recall that would have removed Newsom from the position. 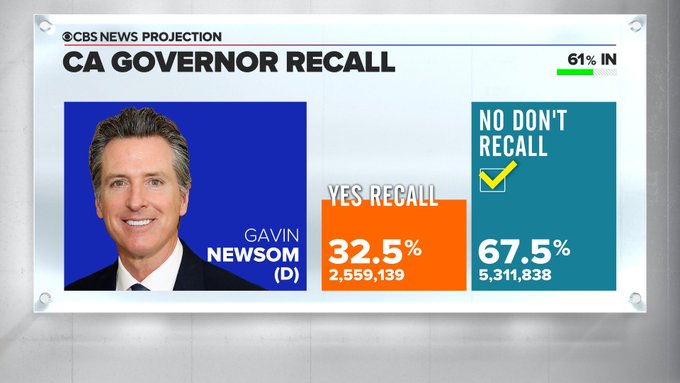 Less than one hour after polls closed, Newsom addressed supporters.

More than half of voters in this election said they felt Governor Newsom was "in touch" with the needs and concerns of Californians.

The "no" vote won out with with most demographic groups: majorities of both men and women, White and non-White voters, and voters of all age groups all voted against the recall.

Newsom avoided an upset loss that would have sent Democrats scrambling ahead of the upcoming 2021 gubernatorial elections in New Jersey and Virginia, as well as the 2022 midterm elections.

The Sept. 14 election was the sixth recall attempt against Newsom, but the first to reach the threshold of signatures needed to trigger an election. The recall began in February 2020, when a group called the California Patriot Coalition aimed to remove Newsom over his policies on COVID-19, homelessness, immigration and the state's taxes and affordability.

The recall effort really took off after Newsom was spotted dining inside an upscale Napa Valley restaurant while his lockdowns on indoor dining were in place.

Leading GOP candidate and conservative radio talk show host Larry Elder told his supporters to be "gracious in defeat" after they booed his mention of Gov. Newsom's name.

"By the way, we may have lost the battle, but we are going to win the war," Elder added.

Reality TV star and former Olympian Caitlyn Jenner entered the race but gained little momentum and left the state for part of the campaign to film a reality show in Australia.

"I can't believe that this many people actually voted to keep him in office. It's a shame," Jenner said.

"You kind of get the government you deserve," she added.

California Democrats had a massive advantage in party registration, and no Republican has won a statewide race since 2006. But the current issues facing the state and worries that the special election could be a bellwether for elections in 2022 brought national attention to the race.

Early ballots had broken 52% Democratic and 25% Republican in terms of party registration, according to elections data firm L2 — this early Democratic advantage was in line with expectations given that Republicans were more likely to turn out on Election Day.

"Once again, voters rejected the Republican Party's denial of the pandemic sweeping our country and their subsequent refusal to address it, rejected Republicans' disproved conspiracy theories about our elections, and rejected Republicans' unwavering loyalty to the man who caused it all —Donald Trump.
"Tonight is a win for the bold agenda put forth by President Biden, Governor Newsom, and Democrats in Congress to build our country back better, deliver on their promises, and get our country back on track. I am confident we will continue to do so in 2021, 2022, and beyond.

"Governor Newsom provides the smart, capable and focused leadership necessary to keep Californians safe and build the state's economy back better amid the COVID-19 pandemic. He has a strong record of delivering for the people of California and I look forward to watching him continue that critical work as governor."