RIVERBANK (CBS13) — The wife of Gilton Solid Waste Management worker Ismael Martinez-Huertas went to the neighborhood where he died in search of answers.

"I would like some answers because he constantly asked them to fix the trucks. Before this happened, the machine jammed and it banged his finger and all they said was, 'Are you ok to drive?'" said Alcira Vega.

Vega questions whether faulty equipment her husband previously complained about may be to blame in his death.

"Had it been fixed the first time, the second time, the third time, the fourth time, none of this would've happened and my kids would have still had their Dad," she added.

The accident happened Monday afternoon on the 5300 block of Homewood Way in Riverbank.

"It's heartbreaking for the entire neighborhood. Everyone was in shock," said a neighbor who didn't want to identify himself.

The Stanislaus County Sheriff's office said Martinez-Huertas had climbed up on the side of the truck when a moving part came down on top of him.

"On the security footage, it showed him getting out of the truck, walking up the side. You can see his vest slightly. He gets out of the truck, climbs back up and then it was at that moment that I noticed he didn't come back down. Looking out my windows, I saw him still in the garbage truck," said neighbor Amoz Marshall.

Marshall believes Martinez-Huertas was dealing with some sort of mechanical issue.

"Every Monday he's here at 7 a.m. picking up our whole street and for whatever reason, he was here at 3:30. Never has he ever been here at 3:30 let alone past 7 o'clock," Marshall said.

He described a conversation he had with Martinez-Huertas about a month ago regarding some of the equipment issues he was having on the job.

"He was picking up our trash can and the trash can dropped. It fell all over our driveway; fell all over the road so I go out and help him clean it up and he was like 'No, it's alright don't worry about it. This has been going on for about a week now.' His trash cans just dropping. He said the sensor is just not catching the trash can where it should be. And what do you know, not even a month later because of that one stupid sensor," Marshall said.

Swipe through pictures of Ismael Martinez-Huertas below:

Marshall said Vega showed up at his doorstep in tears Monday, looking for surveillance video.

"She saw his final moments," he said.

The time stamp on the video indicates the incident happened at about 3:32 p.m., but sheriff's officials said it wasn't until 4:22 p.m. that a neighbor spotted Martinez-Huertas hanging over the side of the truck and called 911.

"It was very hard to handle emotionally. You don't see this stuff. Garbage men, they're your friends, they're your neighbors, they're here to help you and keep your community clean and that's what he was doing. He was doing his job," Marshall said.

"He's a great Dad. He's a great husband," said Vega. "He'd help them with their homework. Especially math because I was really bad at math. He would wake up at 5 o'clock in the morning to take our older one jogging for soccer practice."

Vega told CBS13 Tuesday afternoon that she hadn't heard from anyone from Gilton Solid Waste Management. Richard Gilton, company president, said he had reached out to the Martinez-Huertas family but hadn't yet talked with anyone.

"Our hearts and prayers go out to Ismael's family. Everyone at the organization feels the tragedy," Gilton said.

Gilton said Martinez-Huertas was found pinned between the truck and the arm that dumps the bins into the hopper.

"We are doing an investigation to determine how and why this took place," he said. "There's a lot of moving parts on the machinery so we're trying to figure out exactly what happened."

Gilton said a trash can was found inside the hopper. He believes Martinez-Huertas may have been trying to get it out.

He said employees are instructed to turn off the truck when they are working outside of it. He didn't know whether Martinez-Huertas had done that, but both deputies and neighbors said the truck was running when they discovered him.

"Me and two other guys we were helpless, we couldn't do anything because we didn't know how to turn the engine off," said the unidentified neighbor. "The deputies had to call the company to release the mechanism for the truck where his body was stuck."

Vega said her husband had complained several times about a faulty arm on the truck, but nothing was done.

"He would say something is wrong with the sensors. That they were always glitching. They were never clamping on to the trash cans," she said.

Gilton said he is looking into whether any complaints were filed.

"We do have a process in place where drivers inspect the trucks at the start of their shifts and write up any issues to the shop," he said.

He said the company is doing an audit of past reports to "get all the facts" and to determine what if any of the chain of command was broken.

"This is the first tragedy like this in our 72-year history as a family-owned business," Gilton said.

The California Division of Occupational Safety and Health (CAL-OSHA) is investigating the incident. The agency said Gilton had been fined twice in the past three years for work-related fall injuries. 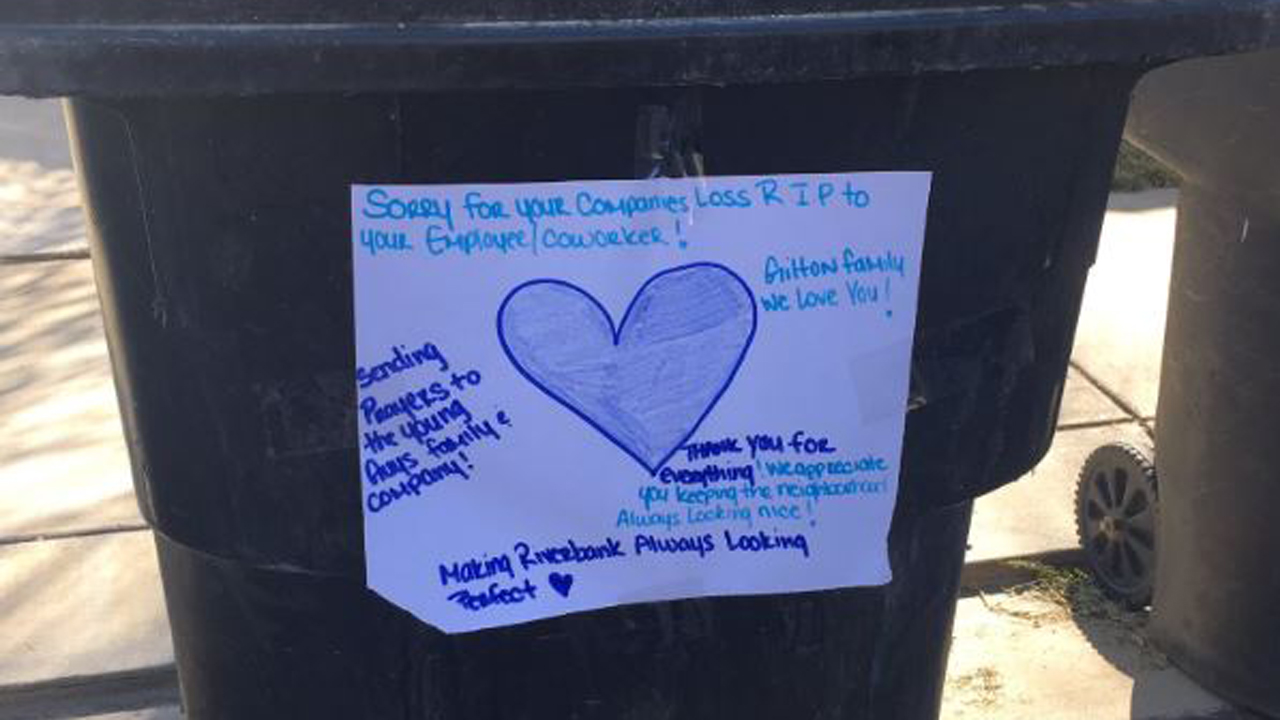 Tuesday, neighbors attached signs with blue hearts in honor of Martinez-Huertas as well as messages to his family, friends and coworkers.

"It's nice. It's very nice," said Vega as she held one of the hearts to her chest.

She said the couple has two sons ages four and 12 and doesn't know what she'll do without her high school sweetheart of 15 years.

"He was sweet. He was kind," she said. "I just want to see him. Want to sit next to him and just hold him."

A candlelight vigil will be held for Martinez-Huertas at 8 p.m. Wednesday on the 5400 block of Homewood Way. Attendees are encouraged to bring their own candles.