PHILADELPHIA (CBS) -- Passengers arriving from overseas, at times bring with them unwanted guests, Customs and Border control agents say it's all in the food.

With the holidays here, Italian meats like prosciutto and salami, along with chestnuts and figs, are being brought in illegally by the pounds.

One passenger arriving in Chicago even tried carving out a book to smuggle in sausage.

U.S Customs and Border Protection is in charge of preventing meat from entering the country illegally, and they see it all, from the basic to the bizarre, like a 100-year-old fermented egg found at Chicago's O'Hare airport, or wild African bush meat discovered at Philadelphia International Airport. 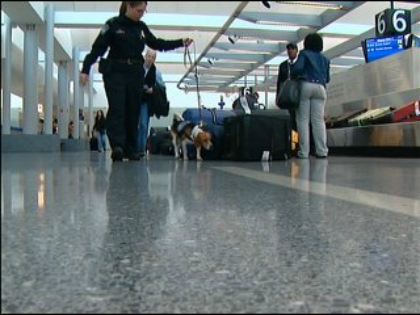 Together they help search the more than one and a half million people who pass through the international terminal every year.

Auburn sniffs and scratches, looking for food that can destroy American crops and livestock.

An outbreak of Foot and Mouth Disease could devastate the beef supply.

"So that steak, that you are maybe spending $6 a pound for at the supermarket, may wind up being $12 a pound," Sapp said.

"At the end of the day all the fruits and vegetables seized are brought back to what is appropriately called 'the grinding room.'"

Fruits and vegetables are meticulously inspected for fruit flies and maggots before being destroyed by a powerful grinder.

It's a non-stop job.

And it's Auburn's nose that has sniffed much of that out.