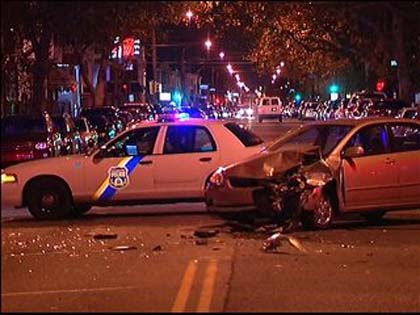 PHILADELPHIA (CBS) – A suspected drunk driver was taken into custody after crashing into two cars, including a Philadelphia police cruiser.

The crash happened at about midnight at 22nd Street and Passyunk Avenue in South Philadelphia.

According to investigators, the suspected drunk driver ran a red light and struck a civilian car before hitting a Philadelphia police cruiser.

The male officer was taken to the Hospital of the University of Pennsylvania with a suspected concussion.

The driver in the civilian car was also taken to HUP to be treated for minor injuries.

The suspect was arrested and has been charged with driving under the influence. His identity was not immediately released.

The crash remains under police investigation.