There's nothing like a perceptive and endearing romcom to restore one's faith in the genre, which is why it's difficult to say enough about Enough Said.

And both are about to be empty nesters as their kids head off to college.

The two single parents, each in midlife-crisis mode, meet at the beginning of Enough Said and embark on a tentative romance.

Catherine Keener plays Marianne, a new client and friend of Eva's.  She's a poet, of all things.  Oh, and by the way, she just happens to be Albert's ex-wife, one who has found and still finds offputting the very things about Albert that Eva now finds charming.

That Eva now has access to a font of information about Albert and that she doesn't fess up about this invasion of privacy could well derail their otherwise budding romance.

The lighthearted comedies of writer-director Nicole Holofcener, a cerebral social satirist whose narratives sometimes fall short of the mark, are usually lower profile than this one (Please Give, Friends with Money, Walking and Talking, Lovely and Amazing). Keener is the Holofcener regular we've come to expect seeing, but it's the two well-known boldface leads this time out whose familiar television credentials hereby raise the director's profile in this, her first studio production. 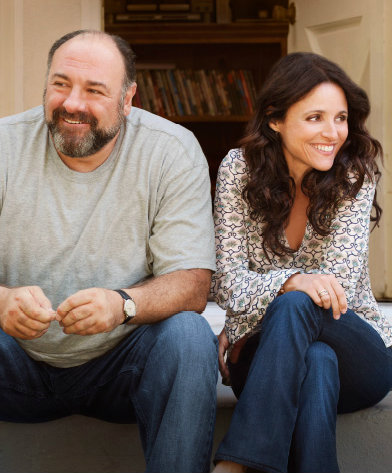 Louis-Dreyfus and Gandolfini, in turn, benefit greatly from Holofcener's razor-sharp, natural-sounding dialogue, which springs not just from her screenwriting ear and capacity for nuance but from her obvious and extensive affection for her focal characters, warts and all.

Of course we like Holofcener's characters. Especially played by these two natural talents. How could we not?  And we feel we've gotten to know them rather quickly.

But we also notice their capacities for anxiety, insecurity, awkwardness. and downright meanness.  Especially Eva's, which often kicks in when she ignores the advice of the film's title and says either too little or too much.

As a bonus, one of the things that our fascination with the characters and the universal truth of their predicaments and limitations does is wash over the narrative's central contrivance until it's no more bothersome than yesterday's traffic.

The two leads are wonderfully appealing and empathetic, Louis-Dreyfus chiefly with understandably desperate manipulativeness, Gandolfini with unforced self-deprecation. And Holofcener gets valuable contributions from her game supporting ensemble, which includes Toni Collette and Ben Falcone as Eva's married friends, Toby Huss as her ex-husband, and Eve Hewson, Tracey Fairaway, and Tavi Gevinson as the central couple's two daughters and a friend.

And not to dismiss the entertainment value of watching TV icons like Tony Soprano and Elaine Benes sharing the big screen, or the poignance of watching Gandolfini perform so soon after his sudden death, but this is a film that works purely on its cinematic merits, a treasure of thoughtful laughs and knowing smiles in response to smart observational humor.

So we'll romance 3 stars out of 4 for the charming and funny romcom of manners, Enough Said. Louis-Dreyfus and Gandolfini.  Enough said.