If you're looking for anything but a typical night out in New York City, here are the five places you'll still be talking about in the morning. By Carly Petrone.

Do you love to dance but hate going to loud clubs to hit the dance floor? Now you don't have to worry about losing your voice at the end of the night because Quiet Clubbing is hitting New York City. Get your ticket to try out this headphone party that lets hundreds of people dance and sing along to their favorite tracks without disturbing the people around them. Up to three DJs spin different tunes behind the booth and all you have to do is choose which one to follow using the color-coordinated option on your headphones. Dance along to the same songs as your friends or get inspired by the crowd's energy around you. All you'll hear when you take off your headphones is the pulse of the beat, making it easy to talk and mingle with others. These crazy "quiet" nights are taking place regularly at Stage 48 and Cantina Rooftop so make sure to check Quiet Event's website to get more information. Or download their free app for complete schedule. Parties normally go from 11 p.m. to 3 a.m.

Head down to the Financial District for a night out at the contemporary speakeasy The Black Hound. Enter through an unassuming door into an amber lit room and relax in the front room at the sleek white marble-topped bar or take it easy in the back lounge. Mixologist Jeremy Strawn has been busy revamping the menu with plenty of fun cocktails that are all named after a literary character or artist. Their 100 day-aged Manhattan and 80 day-aged gin cocktail (that is poured from a teapot with homemade tea) are both great options as the weather begins to turn colder. Nosh on Kobe beef burgers, Bigeye tuna tartare, and truffled mac and cheese when you're ready to refuel.

More: The 5 Best Ways To Geek In NYC

Gear up for the release of the upcoming Star Wars movie by taking a Lightsaber Class at Ripley Grier Studios. Experienced dancers, martial artists, and cosplayers from the New York Jedi crew are back every Thursday (through January) to show you a thing or two about saber choreography. You can show off what you've got or learn a few tricks of the trade. Just make sure you wear comfortable clothing -- and feel to bring your own battle-ready lightsaber if you've got one. Classes are just $10 and last two hours.

More: The 6 Best Cheap Eats On The Lower East Side

Fans of a certain fictional San Diego newscaster, an awful Stepbrother, and horrible racecar driver will want to stop by the newly opened Stay Classy New York. Yep, this Lower East Side bar celebrates all things Will Ferrell, with plenty of cheap drinks, movie trivia nights, and even an art gallery. Their specialty cocktail menu, for example, is filled with hilarious titled drinks like the "Milk Was A Bad Choice" and "Smelly Pirate Hooker." Let's just say the "Did We Just Become Best Friends" consists of two house shots - one for you and one for a friend, which you can leave for him/her to redeem later. And, of course, their housemade sangria is called "The F*cking Catalina Wine Mixer." Retro pin up bartenders will make you any one of these fun concoctions behind the bar through the end of the year. As of now, this place is planned to be open only through the end of December so make sure and cheers to your favorite ridiculous Anchorman before the holidays come to an end. 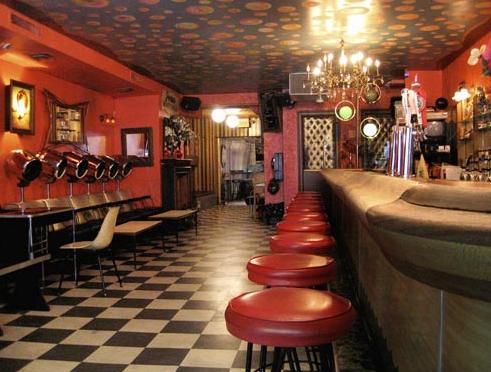 In need of a manicure but don't have to time to stop into a salon before heading out for the night? Make your way to Beauty Bar and grab a martini and mani for just $10. This place is great for bachelorette parties and it's just a fun way to catch up with your friends. They also have a packed calendar with different themed DJ nights and comedy lineups happening multiple times a week. So grab a seat underneath the same chrome-domed hair dryers that once primped blue-haired ladies decades earlier.