NEW YORK -- Close your eyes, open your heart, and listen:

Three women. Three different stories. All three connected by a harrowing habit that has permanently touched their lives, and the lives of everyone they touch.

The answer to that question is as random as closing your eyes and taking a guess. You may not know these women, but you already know, or will know, someone just like them. It's simply that pervasive. Heroin is everywhere, and heroin addiction, is blind.

In this piece you'll also find...

According to the National Institute on Drug Abuse, those using heroin in the 1960s were mainly, "young men from minority groups living in urban areas." These men were using heroin "as their first opioid of abuse." Today, that picture has changed dramatically. Many doctors now consider abuse of prescription pain medication to be a major gateway to heroin. NIDA says the "epidemic of prescription opioid abuse" has also infiltrated the suburbs and impacted "a population…that is less minority." The table below illustrates the clear separation between whites and nonwhites who began abusing opioids after the 1980's.

Data from the Centers for Disease Control and Prevention reveals the number of heroin overdose deaths in the United States nearly doubled from 2012-2014. From 2010-2013, the Substance Abuse and Mental Health Services Administration says 648,000 people in this country, aged 12 and up, used heroin over the past year.

Of the 50 states and the District of Columbia, from 2010-2013, New Jersey and New York ranked fifth and sixth respectively for heroin use in the past year among people 12 or older:

The 125-mile drive from Toms River, New Jersey to Smithtown, New York is a journey through coastlines, tunnels, economic and social diversity, and a fair amount of traffic. 1010WINS.com spent three weeks on this sojourn, stopping in the living rooms of families whose lives have been ravaged by heroin. We visited treatment centers, spoke with doctors, addiction specialists, and mental health experts. We rode along with police as they responded to a 9-1-1 call for a heroin overdose. We listened to parents whose children died from heroin and to those whose lives were saved by a drug that can seemingly "reverse certain death." We found that no location was too remote and no family was too immune to heroin addiction. In fact, we found that the epidemic is getting worse with each passing day.

Captain Juan Colon, of the New Jersey State Police, says the Garden State has some of the purest heroin in the country, resulting "from the direct importation of white Colombian heroin which is most prevalent along the Northeast region of the United States." Colon says white heroin allows the user to smoke or snort the drug, making it an "attractive" introduction for those who may be nervous about using a needle.

The U.S. Department of Justice Drug Enforcement Administration has been sounding the alarm on heroin, calling it, "the biggest threat to public health in the Northeast." The administration says drug traffickers are targeting New York, citing its local division's heroin seizures and four Northeast states that have experienced significant increases in drug overdose death rates from 2013-2014 as evidence. They believe, in part, that this information illustrates "the heroin traffickers are using New York State's thruways as drug pipelines, linking heroin mills in New York City to street level drug dealers throughout New York State and the Northeast to feed opiate addiction."

"In just the last few weeks almost 80 kilograms of heroin was seized locally, which is a clear indication of the scope of the opioid addiction problem in the New York area," said Police Commissioner Bill Bratton in February of this year. "What we are dealing with involves issues of supply and demand. The NYPD continues to work closely with our federal and state law enforcement partners in confronting the supply side. But this growing problem must be effectively addressed on all fronts."

As the DEA's New York Division continues to crack down on the heroin trade, New Jersey is using the "Drug Monitoring Initiative," a system that allows for a better understanding of the state's drug problem.

"DMI's goal is to increase the understanding of the drug situation to enhance demand-reduction and reduce community drug harms," he said. "This will be accomplished through training, outreach, enforcement, and intelligence for law enforcement, healthcare practitioners, and the general public. There are numerous counterdrug efforts that have been implemented. We are developing mechanisms to measure the effectiveness of these efforts against drug harms that we seek to reduce."

Heroin is frequently laced with synthetic drugs, an extremely dangerous proposition for the user. These drugs can include fentanyl, acetyl fentanyl, and methamphetamine. Colon says during 2014, 294 glassine bags submitted to the State Forensic lab contained these types of drugs, among others. Some were sold as heroin. In 2015, this number more than doubled.

"In essence, using heroin is like playing Russian roulette," Colon said. "Users never know what the glassine bags that they buy contain."

In Ocean County, data from the prosecutor's office dating back to 2013 shows that heroin has been credited, or partially credited, with a large portion of all drug-related overdose deaths in the county from 2013-2015. 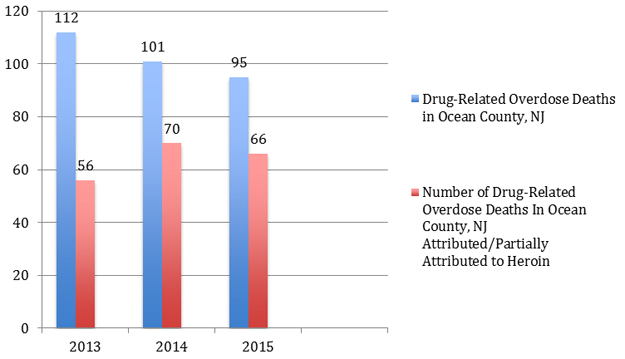 Three years ago, Ocean County Prosecutor Joseph Coronato said he was against medication-assisted treatment for opioid addicted patients. Now, the sheer number of addicted individuals has changed his mind. He says the amount of people in need of help is too overwhelming and there are not enough rehab facilities available to accommodate everyone.

Web Extra: What is Suboxone?

Suboxone, Vivitrol, and Subutex are among the medications used to treat opioid addiction. Dr. Jeffrey Reynolds, President of Family & Children's Association in Mineola, says Suboxone is an opioid replacement therapy that helps curb an addict's biological cravings. Addressing that element of the habit often paves the way for recovering addicts to work on the psychological and spiritual components of the disease. Addiction Specialist, Dr. Dana Jane Saltzman of NYC Suboxone adds a recovering addict using Suboxone for an extended period to treat opioid addiction has a 50 percent greater chance of relapsing when not utilizing other recovery tools such as counseling and attending meetings. Saltzman says Suboxone, "is there to allow [an individual] to do the work of recovery." She notes some side effects of the medication can include sweating, insomnia, and back pain.

Dr. Simon Zysman, Executive Director of Employee Assistance Resources Services, Inc., says "dopamine is naturally produced by the brain and when an individual consumes opioids it floods the brain with dopamine and causes the brain to produce minimal amounts of dopamine. When the opioid addicted individual stops using opioids they experience dopamine deprivation. It takes the brain approximately 90 days to restart producing more dopamine. It takes the brain six months to two years to resume normal dopamine production." Suboxone is one medication that helps bridge that gap. Zysman notes that "patients using heroin for long period[s] of time in large quantities may have caused permanent damage to the synapses in the brain and as a result, will have to be on medication like Suboxone for an indefinite period of time on a maintenance basis."

Toms River is known for its beautiful beaches as well as easy access to shopping, dining, and other nearby shore towns.  The 1979 movie "Amityville Horror" as well as 1988's "X-Files" movie were both filmed here.

Like so many towns, heroin is also sewn into the fabric of its neighborhoods.  Toms River Police Chief Mitchell Little tells 1010WINS.com that the Ocean County Township averages an overdose every week.

Less than two minutes after walking into the Toms River Police Department to talk about the township's heroin problem, a 9-1-1 call came in. Watch as 1010WINS.com reporter Rebecca Granet rides along with police to the scene of the overdose. Hear the 9-1-1 call

While most law enforcement officials agree Narcan saves lives, some also view it as an "enabler," or a "safety net." Learn more about why Chief Little is calling for tougher consequences for overdose victims. SEE MORE

Long Island is also in the midst of a heroin crisis. Nassau County Executive Edward Mangano says at least one person on the Island dies of a drug overdose every single day.

In January 2016, the Nassau County Police Department made 49 heroin arrests, and the numbers are even higher in Suffolk County.

"We have to start taking this seriously," Nassau County PBA President James Carver told 1010WINS.com. "This is an epidemic and if people out there don't think that their child could do heroin, or the neighbor's child could do heroin, they're absolutely wrong. I've worked with police officers that have lost their children [to an] overdose on heroin. I know many people who have been touched by a loss."

Losing A Child To Heroin Addiction

Sitting in her Long Island home surrounded by pictures of her son, Valerie remembers better times and holds on to the last words he ever wrote to her. In less than 10 months, heroin entered Michael's life, and killed him. See the final text between mother and son

The Gateway Drugs -- Is Heroin the Real Problem?

According to the CDC, 2014 saw the highest number of drug overdose deaths than any other recorded year, and opioids were involved in 61 percent of those fatalities. Addiction specialists, law enforcement officials, and psychologists who spoke to 1010WINS.com agree that prescription opioids are today's main gateway drugs to heroin. READ MORE

On The Other Side Of Addiction: Morgan's Story

She has an infectious smile, strawberry blonde hair, and since kicking her heroin habit two years ago, 27-year-old Morgan says she is meeting herself, in many ways, for the first time. SEE MORE

On heroin at the age of 12, off heroin at 15, back on at 16, off again at 17, on again at 20…and so it has gone for Christina and countless others across America. Learn about the one place your children may be hiding drugs that you would never think to look

Maria is five months pregnant with her second child. Every morning the 29-year-old is reminded of her recovery efforts when she takes a drug called Subutex. READ MORE

When Hurricane Sandy hit the Tri-State area in 2012, it shook the region to its core. One expert says we are in the midst of another natural disaster: Hurricane Heroin. SEE MORE