Looking for a bar where people actually interact with each other instead of their cell phones? Try these NYC bars popular with the literary set, where the conversation skews intellectual. Who knows, you might get inspired to write that great American novel you've been putting off. By Selena Ricks-Good.

Founded in 2002, Bowery Poetry Club offers a convivial scene for poetry readings and other performance, including plays, burlesque and bingo. Drinks have fun literary-themed names such as the Allen Gin-sberg, the Robert Frosty and the Pukowski (a PBR and a shot of whiskey). Popular for being one of the remaining outposts of East Village bohemian culture, the space fills up fast, so come early for guaranteed seating.

Best known for its open-mic nights and poetry slams, Nuyorican Poets Cafe has a proud history as a performance space for under-represented artists. On any given night, find the Alphabet City bar packed with a crowd taking in hip hop, spoken word, theater and even video art. In addition to coffee and soft drinks, beer and wine are served to help the crowd loosen up. 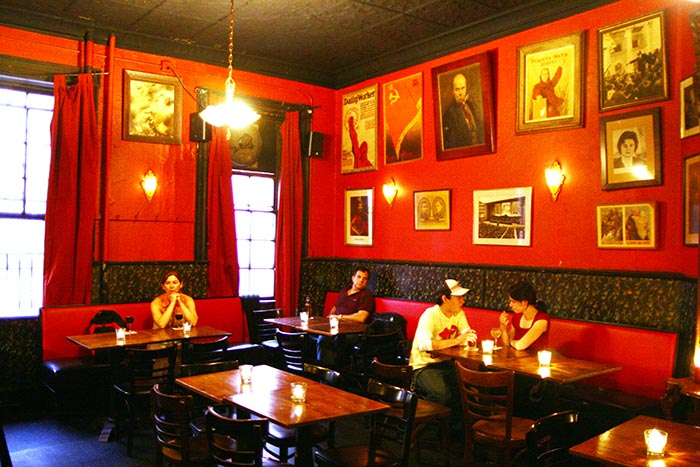 KGB opened in 1993 in the former headquarters of a Ukranian Socialist party and is decorated in red and black Cold War motifs. The bar, which has its own literary journal, remains a hub of literary culture and is host to a regular schedule of readings from young writers to established scribes. Admission is free, and drinks such as Baltika beer and a wide vodka selection are cheap and strong.

One of the oldest bars in NYC, White Horse Tavern's bar stools have hosted many famous writers, from Jack Kerouac to Norman Mailer. But it was the patronage of Welsh poet Dylan Thomas, who reportedly drank himself to death after downing 18 whiskies in one sitting, that secured the bar's place in the literary history. The West Village bar is still popular among locals, NYU students and writer types.

Named for its location below Little Italy rather than the book title, Lolita offers a laidback scene where hip regulars converse among two lounges and a basement featuring banquette seating. At 7 p.m. on Wednesday, Oct. 19, a group of booze-minded writers will gather here for a live reading called "Drink [dot] Think." Hosted by wine and spirits author Kara Newman, expect the cocktails to flow as profusely as the spoken word.

Selena Ricks-Good writes about drinks and produces events as The Dizzy Fizz.