Ah, New Years Eve in New York City. How much more romantic does it get? There's really nowhere else to be—we have the ball in Times Square, cramming throngs of tourists and bridge & tunnel-ers into what is already normally a neighborhood modeled after one of the middle layers of Hell. The price gouging on enforced prix fixe dinners at every restaurant in town. The mandatory ticket purchase to get into dive bars, where $100 gets you a few hours of an open bar which you will not be able to get near more than once because they've oversold by about three times their legal capacity.

Right, like I said, New Years Eve in New York is a sickening nightmare. Leave the mess to the out-of-towners and the recent college grads that just moved into a forced triple in Murray Hill, and do yourself and all your friends a gigantic favor: throw a party! Yes, you! Don't wait for someone else to do it, because it may never happen and you'll spend yet another New Year's at a bar you hate or playing Scattergories in your jammy-jams. Not that the latter isn't thoroughly enjoyable the other 364 days. But just because we live in a city that is completely intolerable on December 31st doesn't mean you shouldn't have fun ringing in the New Year.

One year, I attempted to throw a holiday cocktail party at which I would serve every single one of the ten hors d'oeuvres presented in a spread of Martha Stewart Living. Six minutes before our guests arrived, I was sweating and sobbing in the kitchen with unripe avocado in my hair and on the ceiling, attempting to spoon guacamole artfully onto individual tortilla chips. I beg you, learn from my mistakes.

It pays to be organized and come up with an overall theme for the food. This way you don't go off track and spend way too much time, effort and money on food no one will eat. It doesn't have to be kitschy (though it certainly can), and can be something as simple as deciding on one thing you absolutely want and using it as a foundation for choosing the rest of the menu (for instance: cheese plate, nachos, giant baked ziti, make-your-own pizza, ice cream sundaes, sushi). Try to have one or two more substantial offerings, and then some finger foods. Go for things that can be made in a batch (read: limit garnishing 50 tiny canapés) and try to balance items that can be made in advance with dishes that have to be done day-of. Two or three should cover it, and then you can fill in with snacks that you pretty much open and pop into a bowl, like seasoned nuts, wasabi peas, edamame, olives, etc. Rely on friends for easily-purchased items like chips, crackers, breadsticks, and even dips. And you're all kidding yourselves if you think anyone will be shoveling mouthfuls of salad. For the weight watchers, crudités are much more likely to get eaten (kind of). The fact is, at a New Year's party, nobody wants to go hungry, but the focus is usually on other comestibles.

Obviously, that brings us to drinks. Wine and beer are a-okay, but this is a real celebration! The champagne (or any sparkling wine) should flow, and I recommend having it come out of a can—a pink can at that, which is basically unbeatable. And fret not about keeping your bar stocked with the makings of every conceivable cocktail. You don't need more than a few liquors and several crowd-pleasing mixers (like club soda, tonic water, and cranberry juice) on hand if you have plenty of fun accoutrements to liven up the drinks -- lemons and limes, defrosted black cherries, fresh berries, pomegranate seeds, mint -- this way you can keep it festive without getting stuck with a nearly full bottle of Crème de Menthe which will last into the apocalypse. Also, think about featuring one or two seasonal cocktails. I'm not sure anyone has ever said "no" to a Bailey's on the rocks. I certainly haven't, and I assume I'm invited.

So now that everyone is happily fed and sauced up, you have to give some thought to entertainment. And though this may be bucking the NYE trend, please don't leave the TV on all night, pre- and post-ball drop. If you do, people will inevitably gravitate to the couch like zombies and just mindlessly pound drinks while they watch Ryan Seacrest until they begin to drool, which at some point will induce feelings of inexplicable rage and discontent and now you've got a belligerent drunk on your hands. If your neighbors are cool, karaoke is simply awesome. And a Wii Sports battle of some sort is both active and interactive, so it won't kill the party like a group game of Assassin's Creed might. However, watch for overzealous Wii tennis players standing too close to the plasma who may accidentally crash into your screen in a heated attempt to ace their opponents. Take it from me, this is a lesson learned the hard way (it was an accident, okay?). Remember that if you do play a game, make sure you have music up so that the whole room doesn't feel the need to focus on what a few people are doing. 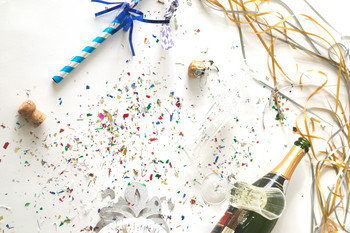 Dress code: Hear me out. Yes, you and your friends are way too cool/sophisticated/urbane to "do" New Years with the riffraff. And yes, it's just your apartment, and Guest of a Guest will not be taking pictures. But if you ask people to come in cocktail attire, all of your friends will be exponentially more spirited and ready for a party when they arrive. The effort of getting dolled up and making that effort count means nobody will be feeling slouchy and Scrooge-like and nobody is going to lame out at 12:01 AM.

Decor: You don't have to go crazy, but everyone likes a little sparkle to go with their cocktail attire. This is a matter of personal preference, but a few wall signs and streamers can go a long way. Avoid confetti. No matter how shiny and cute, as you will surely find yourself the next morning on your hands and knees picking individual pieces out of the rug, screaming and weeping in a histrionic scene that would make Joan Crawford jealous.

Not to mention: Why have a thoughtful menu and bar if you're going to put out red solo cups and paper towels? Go the extra distance and get clear cups, plastic champagne flutes, and festive cocktail napkins. (And don't skimp on those supplies, either, or people will find your real stuff and you will be doing dishes for days.) Put out fun straws and noisemakers and stupid paper crowns for people, too. This is one of the few nights of the year when it's socially acceptable to junk it up a little, but only in the most classy way. If your guests feel the spirit of the party in everything you do, they'll get swept away, and you will henceforth be known as a host/hostess with the most/mostess. Because yes, someone there is bound to crack that old chestnut out at some point.

Finally, and this goes for any party any night of the week: Have fun!

...But have the right amount of fun. Nobody likes to be followed around with coasters and a Dustbuster, you psycho. On the other hand, you can't have as much fun as the guest who is having the most fun, otherwise you'll wake up to that scene from The Hangover and you're going to be really sorry when you find a tiger in your bathroom and all your doorknobs missing. Oh, no, I mean, your friends are totally great, don't get me wrong, but you know- pack mentality.

If you follow this guide, you're bound to have a great New Year's Eve for once, and you won't have to be all like, "Blarg, I hate New Years. It's just another day of the year rawr rawr blah blah blah, etcetera." Sure, it'll be a lot of work, but you'll be a hero. And guess who doesn't have to beat back the hordes of obnoxious drunks trying to make the 5:00 AM LIRR train to get to bed when the party is over? That's right, this guy. You're welcome.

Looking for a helping hand in planning your holiday soiree? Check out our top picks for area party planners.