NEW YORK (CBSNewYork) -- A Staten Island community was on edge Friday evening as police searched for a man who allegedly was seen wheeling the body of his dead wife down the street.

As CBS2's Steve Langford reported, it happened around 7:10 a.m. at 42 Post Lane in the Mariners Harbor section of Staten Island. Parents were putting their kids on school buses in the neighborhood when someone saw the man pushing a flat, rusty metal cart down the quiet one-way street -- with a flat object on top of it.

A neighbor named Nick said he didn't know what to think.

"There's a lot of crime in this neighborhood, but this is really a bizarre case," he said.

"Right now, all of us are kind of like frantic and fearful, and shocked and surprised," neighbor Cherise Taylor said.

The body of a woman, 26, lay abandoned right next to the sidewalk. The sight was all too clear to neighbors, some of whom got a glimpse of the makeshift cart on which the victim was left dead, wrapped in a blanket or sheet.

Police were called to the scene when someone noticed the man pushing the dolly down the street -- possibly looking to dump it into the water nearby, sources said. When an NYPD detective approached the man – identified as Anthony Lopez, 31 – he fled and left the cart and the corpse on a neighbor's lawn, sources said. 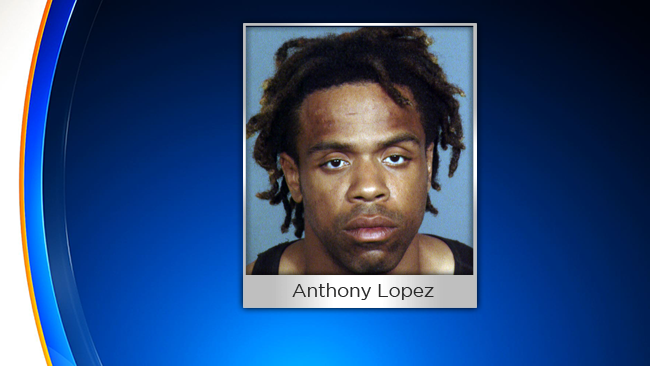 "I don't know what you would call that that he made or whatever it was – wood with wheels or something," Taylor said.

Police sources said the woman was Lopez's wife, and claimed that Lopez called his brother and essentially said, "I killed her." This was the tip that sent police to the scene, sources said.

"It's very shocking," said Post Lane resident Tom Meadows. "This is a quiet neighborhood. This is a nice neighborhood. All the neighbors get along. We all know each other and look out for each other. Never has anything like this happened."

A frightened neighbor who did not want to show her face told CBS2's Brian Conybeare she often saw the victim and the suspect together. She said they lived in the Richmond Court condominium complex on Richmond Terrace about a block away.

"She would come outside, and I would see her a lot with bruises," the neighbor said. "She was very scared of him."

"He's a very well-known crackhead and drug user, so when he used, I feel like it really added to his aggression," the anonymous neighbor said.

Lopez has been arrested 52 times in total and 30 times in the past 16 years, 1010 WINS' Carol D'Auria reported. In learning that, neighbor Joshua had one question: "What is he doing on the street then, if he has that many arrests?"

Yellow evidence markers were all over the scene late Friday, including a piece of rope on the next street over.

A block away, the NYPD Fugitive Task Force searched a burned home and backyard late in the afternoon, but there was no sign of Lopez.

The brazen barbarity of it all left many in the neighborhood sick with fear.

"Just worried the person is still loose -- running around loose -- that did this," Taylor said.

"It's really sad. I feel very, very bad," said the neighbor who declined to be identified. "My condolences go out to her family, but honestly, it was just a matter of time before it happened."

Police sources said the woman's body had some bruising on it, but the New York City Medical Examiner's office must conduct an autopsy to determine the cause of death.

Anyone with information on Lopez's whereabouts is asked to call the NYPD Crime Stoppers at 800-577-TIPS, visit the Crime Stoppers website, or text tips to 274637 (CRIMES) and enter TIP577.