#Attention. It's a commodity in today's "click," "swipe," and "type" society. Social media platforms send us notifications, emails pile up, and text messages come in by the second. Many of us can't remember the last message we sent on Snapchat because the conversation already disappeared. It's all so fast. Yet the lasting impact these notifications have on the lives they touch is unparalleled.

MORE: In Their Own Words | Social Media And Your Brain | Sex And Social Media | Cyberbullying | Surgery For Selfies | Parenting In The Social Media World | Join The #IDecide Movement

Take a moment to think of the young girl in your life whom you love the most.

Your daughter. Your sister. Your niece.

She is living in a world where her identity is often defined by friends, filters, and followers. And every time she checks her Instagram, for example, she's at risk of seeing images like these: 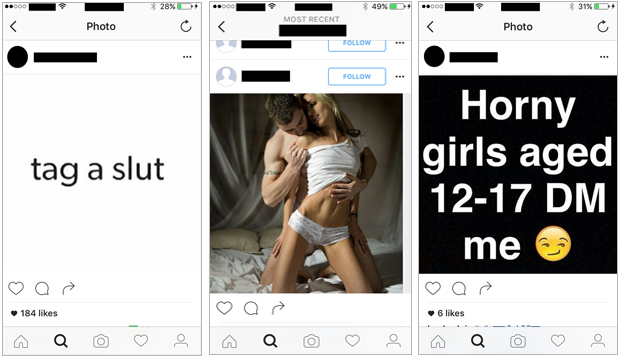 Got your #attention? Social media's incomparable reach and the ability to post images like these have left today's young women increasingly hypersexualized, cyberbullied, and more body conscious with each passing post. We live in a society that strives for "likes," but when it comes to the self-esteem of today's young women, it seems it's hardest for them to "like" themselves. Never before have we been closer to having the world at our fingertips, and yet this generation of young girls is slipping through our fingers.

The chart below illustrates Internet usage habits in American teenagers:

The report attributes frequent online access, in part, to the fact that 73 percent of U.S. teens surveyed, ages 13-17, "have or have access to" a smartphone. The numbers associated with social media use follow the same trend. Just over three-quarters of the teens surveyed said they "use social media." Of the seven platforms teens were asked about in the survey, girls were overall more likely than boys to use the sites.

During May and June 2016, 1010WINS.com conducted an original survey of 492 tweens and teens, ages 12-19, from New Jersey, Long Island, and the five boroughs to get a local understanding of how social media impacts their lives. The below chart illustrates, on average, how many hours a day the tweens and teens said they spent on social media:

A January 2015 article published in the American Academy of Pediatrics newsmagazine said, "a recent study found that nearly 60 percent of children use social media by age 10."

In many cases, that can start a vicious cycle. Uniondale High School senior, Ariana, says it seems teenagers are continuously on social media.

"Every five seconds you see someone taking a selfie and it's like they can't function without their phone...I mean I do like to take snaps occasionally but [teenagers are] just addicted to it and it becomes a part of them," she said. "I think that's the biggest issue with social media." 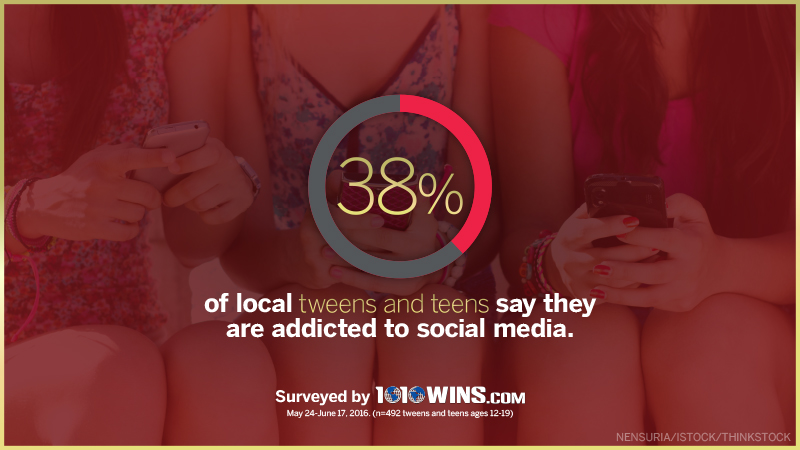 Dr. Jennifer Powell-Lunder, a clinical psychologist who specializes in social media's impact on teens and tweens, says there are many actions that girls encounter on social media sites that can influence their self-esteem. These include: 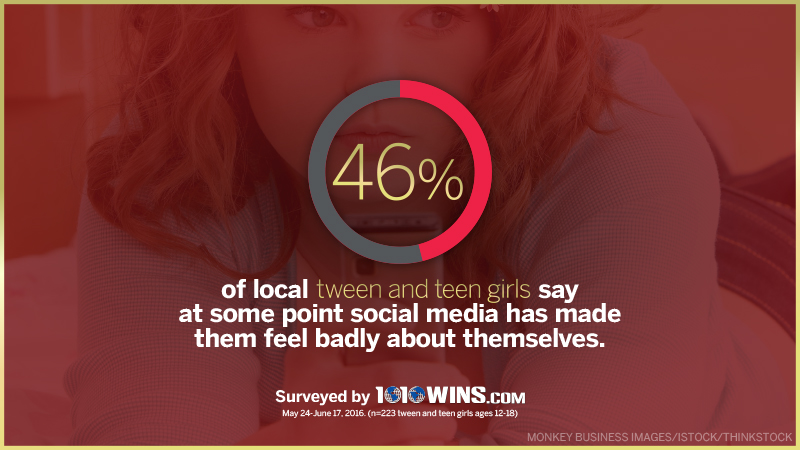 Many girls who spoke to 1010WINS.com said in this culture of immediacy, social media has had a large impact on their self-concept. No longer is it solely the airbrushed image of a model gracing the cover of the latest magazine or the largest billboard reminding them of society's "ideal" woman. Now it's their friends in their newsfeeds appearing to have the perfect lives using apps, captions, and emojis to present a flawless image and lifestyle.

"You see one person graduating from grad school and I didn't necessarily start yet, so it's like am I supposed to be in grad school right now?" said 24-year-old Gabrielle. "...I think that's what causes a lot of anxiety. The comparison. The need to 'keep up with the Joneses' or you know, 'keep up with the Kardashians' nowadays."

Celebrities like the Kardashians will often appear in the same newsfeeds and stories in which a girl's friends appear, even using the same filters and hashtags.  It can make them seem more relatable than ever before, and the behavior they model often becomes the behavior mimicked by millions of young girls around the world. That can include the infamous, "nude selfies."

"Adolescents are egocentric by nature," Dr. Powell-Lunder said. "This is part of brain development...so they're really not thinking through the consequences when they put out these pictures. What they're thinking about is that Kim Kardashian put out a video and now she's one of the most famous people in the entire universe."

Popularity in the form of "followers" and "likes" is so powerful in today's society that it's fueling a new kind of fame: Internet celebrities. This often happens when previously "unknown" girls post certain content, such as beauty tips and clever memes, that gain enough traction to earn them endorsement deals and even appearances on major television shows.

Following an online petition, Claudia Oshry, who rose to Internet fame with her "@girlwithnojob" Instagram account, was invited to be the bartender on an April 2016 episode of Bravo's "Watch What Happens Live" with Andy Cohen.

The 21-year-old New York resident spoke to 1010WINS.com about her over 2 million Instagram followers.

"Social media means everything to me," she said. "It's how our generation communicates and it's how I engage with my followers all around the world."

Oshry also says there are certain posts that resonate with her fans.

"My followers love anything that relates to food and Netflix," she said. "Those topics are guaranteed to get at least 50,000 'likes.'"

But for the "average" girl, 50,000 "likes" are not so easy to come by, and oftentimes "likes" translate to "acceptance" in today's society. The lack thereof can attack a young girl's self-esteem.

"The popularity contest that high school has always been has sort of migrated onto social media," said Nancy Jo Sales, author of the book American Girls: Social Media and the Secret Lives of Teenagers.

Many girls tell 1010WINS.com that they will wait for a certain time of day to post a photo in order to receive the maximum amount of "likes." They will also remove a post if it doesn't get enough "likes" or positive comments in a certain amount of time, and they say it sometimes takes hours to take the perfect selfie to share.

"I've witnessed a lot of girl friends of mine that it's maybe 10, 20, 30 [photos] before they find one that they're content with posting online," said Rutgers University senior Matt Breznak.

He says this extreme control over one's online image leads to a false sense of reality.

"Life is your best and your worst," said Breznak. "If you're only showing people what you believe to be your best, you're not showing them who you really are."

Posting for public review opens girls up to a tremendous amount of judgment.  Pressure to post or send sexually explicit content abounds, positive and negative comments draw attention to one's appearance, and disparaging remarks are hard to ignore when notifications extend far beyond the last school bell. Any inappropriate or "mistaken" post can be saved and spread around in an instant. This kind of high pressure, unforgiving atmosphere can have a magnified impact on young girls at an acutely vulnerable time in their lives, particularly when information cited on the NYC Girls Project website states that, "girls' self-esteem plummets at age 12 and doesn't improve until 20."

Social media has the power to connect us all, but today more and more young girls are finding themselves disconnected from their self-esteem.

"This situation has built up whereby kids feel through the addictive nature of it [social media and technology], through the constancy of it, and through this sort of very fraught sexually explicit atmosphere that it very often has, I think it's just presenting girls with really unprecedented challenges to their self-esteem, to their sense of well-being, to their sense of safety," said Sales.

The technology utilized by today's youth has created obstacles that no other generation of young girls has had to so intensely and inescapably contend with as they come of age.