NEW YORK (CBSNewYork) - The major winter storm that blew into our area Wednesday is the first major snow of its kind in New York City in several years.

4 p.m.-7 p.m. Wednesday: A little snow starts falling in the first half of the afternoon, particularly south and west, but it will be developing mainly after 4 p.m. It was light to moderate snow, and conditions were breezy.

7 p.m.-11 p.m. Wednesday: Snow intensifies into the night, with a mix of heavy snow and blustery conditions.

11 p.m.-7 a.m. Thursday morning: This is the most intense period of the storm, with accumulations of 1-2 inches per hour or more, and potential blizzard conditions along the coast from time to time. Occasional thundersnow was possible. Significant snowfall of a foot or more is very likely in areas north and west of New York City, including parts of New Jersey and Connecticut. Totals decrease as you head south and east and get closer to the coast.

7 a.m.-11 a.m. Thursday: Snow tapers off through the morning, with the last of the snow falling in the early afternoon. There may still be some mixing south and east. 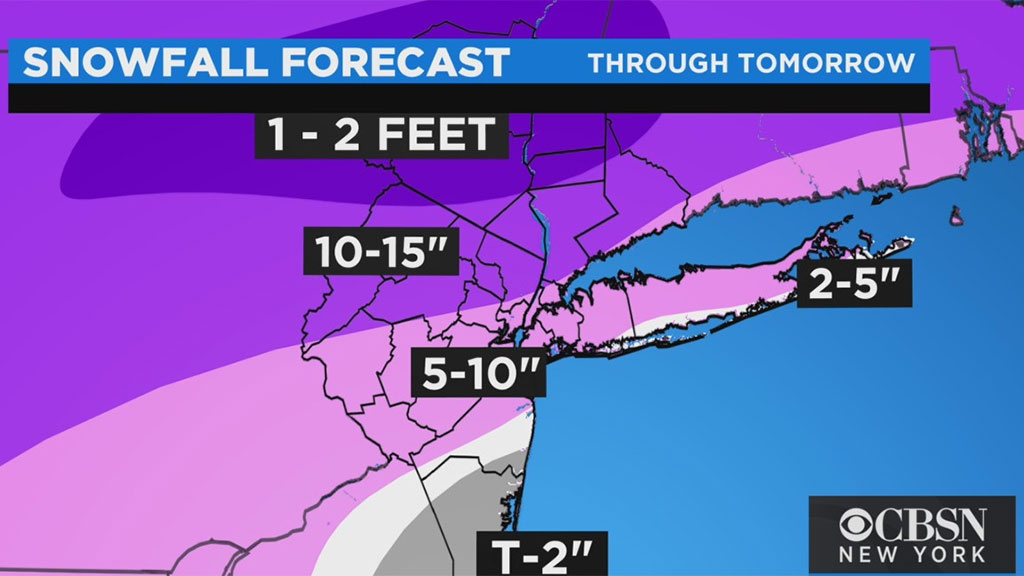 The cold will linger for several days after the storm, so do not expect rapid melting. Complicating matters, whatever does melt has the potential to refreeze.