When Noah Syndergaard missed his start on Thursday, it was reported that he had biceps discomfort. On Friday, the Mets' right-hander reportedly not only said he felt great but that he should have pitched the day prior. Evidently he had declined a suggested MRI. We all know how that turned out when, only four outs into his start Sunday, Syndergaard clutched his right underarm before exiting the field in pain.

The New York Times then reported that general manager Sandy Alderson noted that the pitcher's latest issue "may or may not be related to his previous complaint, which was biceps, so we have to wait and see what happens." However, manager Terry Collins commented that the current injury is likely to the lat and is "not even close to the same area."

The mystery was solved Monday, when MRI results revealed a partial tear of the right lat (which is a Grade 2 injury). Syndergaard was placed on the 10-day disabled list, though there is no way he'll return that quickly. This story – and its consequences – won't end here.

One point of concern is whether this represents an entirely new injury or not, Syndergaard would have been predisposed to something getting tweaked if he did in fact have even a mild underlying condition, particularly if it caused him to alter his mechanics. Without an MRI last week, we'll never know whether it was in fact the biceps or lat causing Syndergaard's original symptoms.

MORE: Keidel: Early Or Not, Mets' Season Is Teetering On Brink Of Destruction

Though we now know the source of the pitcher's problem, it is a perfect time to explain a little about the biceps and the latissimus and their relationship with the pitching shoulder.

Though the biceps and the lat muscles occupy totally different parts of the body and serve very different functions, they exist in close proximity near their attachments. Though a physical exam and diagnostic imaging studies can differentiate which of the two muscles is involved in an injury, each might cause a pitcher to complain of pain at the shoulder.

The primary actions of the biceps are to flex the elbow and supinate the forearm (turn the palm upwards). However, it contributes to the action of shoulder flexion (raising the arm upward in front of the body), and is thought to offer a degree of shoulder stability by depressing the head of the humerus at the shoulder joint, thereby helping to prevent impingement of other soft tissues in the area.

The biceps has two heads. At the shoulder, its long head attaches to a bony prominence (the supraglenoid tubercle), via a tendon that runs in a groove in the upper humerus (called the intertubercular groove or the bicipital groove). The shorter head attaches nearby, at a bony process (the coracoid) that juts forward from the shoulder blade (scapula) and lies under the collarbone (clavicle). 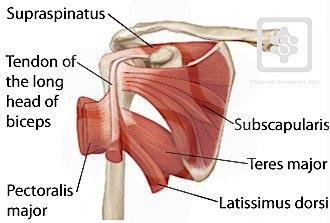 The lats are very large muscles whose primary functions are to inwardly rotate the shoulder as well as to extend it (bring the arm from the front of the body toward the back) and draw the arm toward one's side (adduct the shoulder).

The lat tendon inserts into the lower portion of the bicipital groove mentioned above. The broad fan-shaped muscle originates at the spine from the mid back to the base of the lumbar region, at the fascia in this area, as well as from the lower ribs and the lowermost portion of the shoulder blade.

The biceps and lats during the pitching motion

EMG studies have identified that the lat is eccentrically stressed during the cocking phase of the pitching motion and the biceps are activated late in this phase as well. During the acceleration phase, the lat is active while the biceps are not. This phase begins with muscles first acting to decelerate the arm, limiting the shoulder outward rotation and elbow flexion before initiating the opposite actions to impart acceleration to the ball. Follow-through also entails deceleration of the upper extremity via eccentric contraction of the musculature. During this phase, the elbow and forearm move into extension and pronation (palm turns downward). The biceps contract to help prevent hyperextension at the elbow in this phase.

For more on muscle actions and injuries as they relate to the throwing shoulder, read here.

Non-traumatic injuries to the lat are more common among pitchers than for the rest of us. Symptoms are often greatest with the release of the ball and with follow-through. Pain is generally reported in the back of the armpit as well as the upper arm.

The lat is a forceful muscle important for the performance of many sports. As with other muscular strains, the severity of lat injuries are graded on a spectrum from Grade 1, being very mild, to a Grade 3, when it is completely torn. In some cases, the muscle tears away from its attachment to the humerus. This is called an avulsion, and it is an injury that requires surgical repair.