NEW YORK (CBSNewYork/AP) -- Following his funeral at Park Avenue Synagogue on Manhattan's Upper East Side, U.S. Sen. Frank Lautenberg's casket was brought to the train station that bears his name in Secaucus for one last ride on the rails that he loved so much.

Lautenberg's casket was placed aboard a D.C.-bound Amtrak train at the Frank R. Lautenberg Rail Station.

A brief ceremony in the station's rotunda honored him, and then an honor guard of police officers, bagpipers and drummers escorted the casket to a platform. Officers stood at attention as his flag-draped casket was pushed onto the baggage car of a private Amtrak train. Lautenberg's widow looked into the car where her husband's casket was loaded, and finally his family boarded two passenger cars.

"He is, and was, Mr. Transportation,'' New Jersey's other senator, Robert Menendez, told reporters Monday, choking up as he spoke.

Broadway vocalist Brian Stokes Mitchell sang "The Impossible Dream (The Quest)" from "The Man of La Mancha" at the service – a song that Lautenberg's wife, Bonnie, said encapsulated the senator's own mission personally.

"Frank would always be a man of the people and for the people, never forgetting his humble start,'' Cosgrove said. He began the service with a Hebrew blessing while Lautenberg's wife and children stood near the senator's flag-draped casket.

Lautenberg died Monday after suffering complications from viral pneumonia. At 89, he was the Senate's oldest member and the last World War II veteran to serve in the Senate. He is survived by his wife, Bonnie Englebardt Lautenberg, six children and 13 grandchildren, who were all in attendance for the final farewell.

Reflecting on such signature Lautenberg accomplishments as the laws that banned smoking on most U.S. flights and made 21 the drinking age in all 50 states, Cosgrove said it seems difficult now to imagine "that those matters which were undoubtedly fierce debates of their time, and for which Senator Lautenberg withstood withering criticism, now, in retrospect, appear as inevitable and obvious as they seem necessary.''

Before he died, Lautenberg gave his rabbi specific instructions about how he wanted to be eulogized, CBS 2's Marcia Kramer reported.

"He told me he wanted to be remembered as a man from humble beginnings who did good and then used those opportunities provided to him to do the same for others," said Rabbi Dan Cohen of Temple Sharey Tefilo-Israel of South Orange, N.J.

His wishes were carried out, not only by his rabbi, but those who knew and worked with him.

Biden kept the gathered mourners laughing with a series of jokes and anecdotes. The vice president was near the last of the speakers, each of whom had lauded Lautenberg's accomplishments.

"If there's a definition of redundant, I'm it," Biden said as he took the podium.

Biden seemed to enjoy a more jocular take on his eulogy, somewhat roasting Lautenberg with a numerous quips and stories.

Lautenberg was "the living definition of what it means to be a successful man,'' Biden said.

"Frank always had to be in the game -- that's what I loved about your father,'' Biden told his family and the others at the synagogue. "Too much left to be done --- too many injustices left to right. Too many people needing help. --- He saw (the Senate) as the place he could do more than all the financial successes that he had.''

Through a series of anecdotes and jokes, Biden spoke highly of Lautenberg's tenacity and impact.

"If it wasn't for Frank, Amtrak wouldn't be what it is today," Biden said.

Clinton lauded Lautenberg as a "champion of women's rights and opportunities."

Lautenberg's story "was an American story, but in his heart and in his lifetime, he was a man from New Jersey, a kid from Paterson,'' Menendez said during the service.

"I will remember his life as a testament to what is possible to achieve in America. And I take it as a challenge, as should all of us, to continue the many causes he championed," said Menendez in his eulogy.

"Rest in peace my love, I will miss you always," Bonnie Lautenberg said.

The program featured a Lautenberg quote inscribed on a plaque on the exterior of the Frank R. Lautenberg Post Office and Courthouse in Newark: "The true measure of a democracy is its dispensation of justice.'' 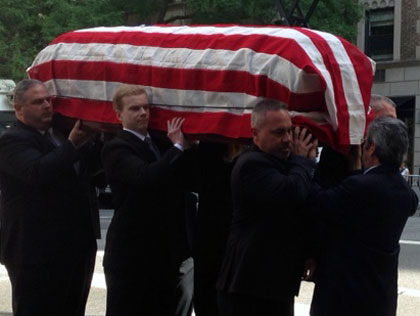 Dozens of dignitaries were designated as honorary pallbearers, including 17 senators -- mostly Democrats, among them Senate Majority Leader Harry Reid, but also a few Republicans, including Sens. Richard Shelby of Alabama and Marco Rubio of Florida.

Lautenberg got into politics after building a fortune as a founder of Automatic Data Processing, a payroll processor. He was first elected to the Senate in 1982 and served five terms, retiring in 2000.

Two years later, he was elected again when then-Gov. James McGreevey tapped him to fill the seat that disgraced Sen. Robert Torricelli was forced out of.

He was re-elected again in 2008 and held the record for the number of votes cast by a New Jersey Senator, his office said.

Lautenberg's second daughter, Nan Morgart, said that during her father's brief retirement from the Senate, "he was so bored'' that he'd call her daily to ask how many products she'd sold at her job as a sales representative for IBM.

"I not only had a quota from IBM but an arbitrary quota from my dad,'' she said with a laugh.

Lautenberg was a staunch advocate for public transit and played a key role in creating the Secaucus Junction train station, which is named after him.

He was also known for his advocacy of gun control measures — having authored a law that prevented domestic abusers from possessing guns -- and he fought to limit online and mail-order ammunition sales.

Lautenberg's eldest daughter, Ellen Lautenberg, said her father's life story "shaped my path by demonstrating that there are always new opportunities to learn and grow.''

His casket was set to arrive at the U.S. Capitol on Thursday and lie in repose in the Senate chamber, on the Lincoln Catafalque, a bier that was built for the coffin of Abraham Lincoln.

Lautenberg, who served in the Army Signal Corps during World War II, will be buried Friday at Arlington National Cemetery.

On Tuesday, Gov. Christie announced a special election will be held on Oct. 16 to select a replacement for Lautenberg's term, set to end in November of 2014.