When Rascal Flatts took the stage at the First Midwest Bank Amphitheatre outside Chicago this past Saturday, fans had no trouble finding them—just go 'til you hear a banjo. From the first pluck of the strings, the trio (Gary LeVox, Jay DeMarcus, and Joe Don Rooney) threw the audience into a backwoods bash--albeit one wrapped in a high-tech stage production that included massive video screens, glowing curtains of light, five specially outfitted cubes that hung from the ceiling and changed color with the music, and a sound that was loud enough to be heard back in downtown Chicago.

After engaging sets from openers Edens Edge, Eli Young Band, and Little Big Town (see photos), the Flatts kicked their headlining performance off with the twangy “Banjo” and the fitting “Summer Nights,” amping up the rowdy sea of cowboy hats and plaid shirts that filled the open-air pavilion, from the front row to the top of the lawn.

The list of sing-alongs piled higher when LeVox belted out Flatts hits from the early 2000s including “Fast Cars and Freedom” and “These Days.” The band then jumped to the present with their current single “Come Wake Me Up.” 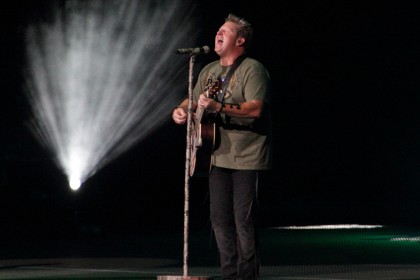 The temperature outside may have been cooling off, but the band kept the heat on with another track off their new Changed album called “Hot In Here.” The hook-filled tune had everyone echoing the lyrics as if it had been on radio for years.

After a pair of new songs, the trio acknowledged that in the past, some fans have left shows disappointed because their favorites didn’t make the set list. To help fix this problem, they asked for requests. The crowd roared out song titles; amid the noise four of them were able to catch the attention of the Flatts boys, who then gave fans shortened, impromptu performances of “I Melt,” “My Wish,” “Mayberry,” and “Stand.”

The music continued with "Why Wait," the infectious tale of popping the question featuring LeVox on lead vocals. Bass player DeMarcus then took over the spotlight, sitting alone at a keyboard and crooning out a cover of the Bill Withers classic “Lean On Me.”

DeMarcus’ bandmates rejoined him on stage for their GRAMMY-winning “Bless the Broken Road.” It may have been Number One hit back in 2005, but the audience reaction showed it was still as fresh as ever. 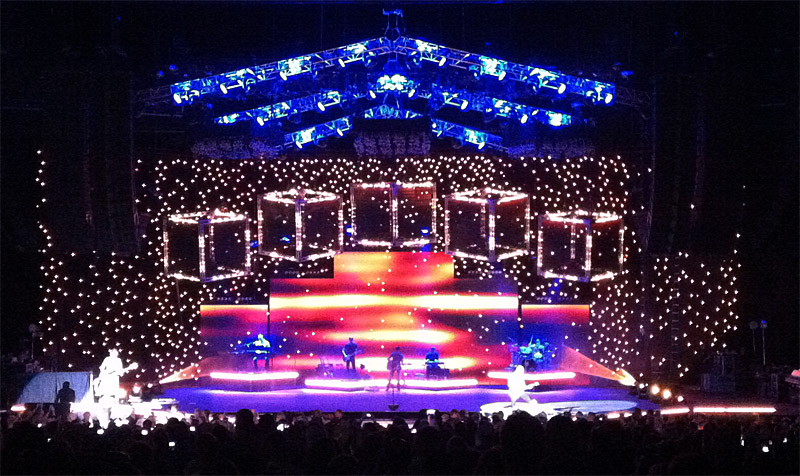 Now that LeVox and DeMarcus had their moments alone in the spotlight, it was Joe Don Rooney’s turn. He pounded on one of his many electric guitars for an earth-shattering instrumental showcase (which also included a thermin). He masterfully rocked an extended intro to “Me and My Gang” before Gary and Jay returned to finish the song.

The fast-pace rolled on with their feel-good version of the Tom Cochrane song “Life Is A Highway,” which they covered on the Cars movie soundtrack. The boys then expressed their appreciation for the fans’ enthusiastic support in “Here’s to You,” explaining that “you're the heart and soul and the reason we do what we do, here's to you.” The band's gratitude was evident throughout the lyrics.

The high-octane nature of the night halted for the emotional account of lost love in “What Hurts the Most.” The tight harmonies and expressive playing combined for a passionate, emotional delivery.

For the finale, Rascal Flatts invited all three opening acts back to the stage for a rousing version of the 1970s hard rock smash “We’re an American Band.” 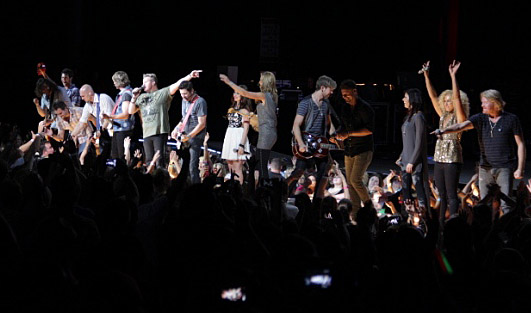 All bands on the 'Changed' tour together on stage in Chicago (photo by Brian Lynch/US99.5)

See all photos from the Changed Tour stop in Chicago.

Jay DeMarcus shows up in hospital scrubs minutes before a Rascal Flatts show in Detroit.