As CBS2's Jessica Schneider reported, residents of the houses in Shoreham, Suffolk County blame a nearby sod farm where they say the snow piled 15 feet high.

An unexpected and raging rush of water inundated a basement in Shoreham around 2 p.m. Wednesday. The flooding did not stop until the late afternoon. 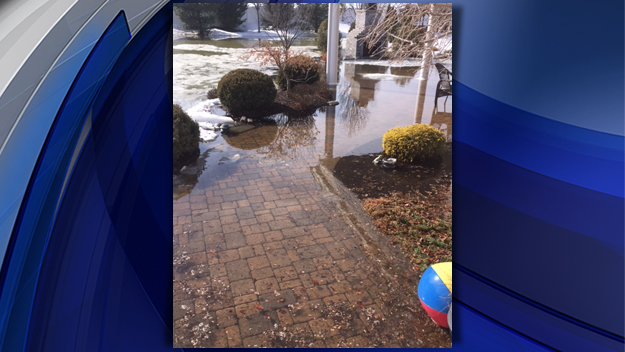 Feet of water ended up flooding Harding's yard, and several others on Sherwood Drive. The melted snow was blamed for the massive mess.

"It looked like a parting of the Red Sea, I'll tell you the truth," said neighbor Mike Fischetti. "It was a flood here like you would not believe."

Just behind a fence from the flooded houses is the DeLalio Sod Farm. Neighbors said the snow was plowed up to 15 feet high against the fence at the farm.

Thus, when the weather got warm, the snow began to melt and flooded into people's yards, neighbors said.

Harding said he never thought the snow would melt and come ripping toward his house in such a fashion.

"Absolutely not," he said. "It just came with such a fury."

Residents said the sod farm did not have its drains cleared out properly, and also said the Town of Brookhaven should not have plowed the mounds of snow so close to the properties.

CBS2 called the sod farm, but the call went unanswered. CBS2 could not get in touch with Brookhaven town public works officials.

Harding said he was "very upset" and mad because it just shouldn't have happened.

"Basically, I'm actually homeless right now. I have to go find somewhere to stay with my family; my wife and three children," Harding continued, adding that he does not know how long it will be until he can go back to his house. He said "hopefully, not long."

The damage was so extensive at the three affected homes that they were condemned.