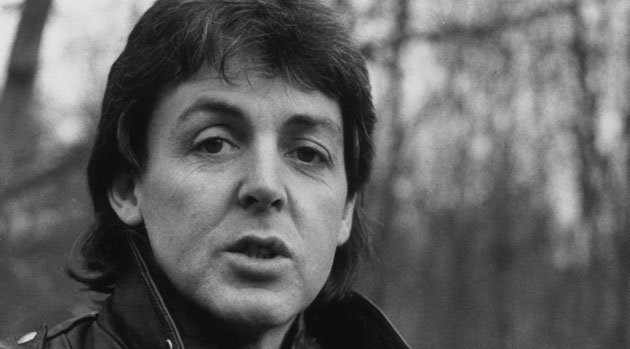 With the 50th anniversary of The Beatles appearance on the Ed Sullivan Show quickly approaching, CBS has dug deep into its archives to unearth some memorable moments with the band and each of its members.

Scott Muni — a groundbreaking broadcaster and member of the legendary WNEW in New York City — spoke with Paul McCartney in studio on October 16, 1984. McCartney was in studio to promote "We All Stand Together." The song — released on November 12, 1984 and credited to Paul McCartney And The Frog Chorus— was a part of the animated short Rupert and the Frog Song; written, produced and starring McCartney.

During the interview, McCartney talks about the trouble in choosing his favorite song from the entire Beatles catalogue.

"Well, it's difficult to choose the favorite. It ('Here, There and Everywhere') is one of my favorites. You look at your songs and kinda look to see which of the ones you think are maybe the best constructed and stuff," says McCartney. "I think 'Yesterday' — if it wasn't so successful — might be my favorite."

"But, you know, you get that thing when something is just so successful... people often don't want to do 'the big one' that everyone wants them to do. They kind of shy away from it," continued McCartney. "'Here, There and Everywhere' with 'Yesterday' as a close second."

Released just a week after Rupert and the Frog Song in 1984 was Give My Regards to Broad Street, starring McCartney and former bandmate Ringo Starr. Much like their previous ventures onto the big screen with The Beatles, Give My Regards to Broad Street was a musical film; and much like the band's endeavors into film — with the exception of A Hard Day's Night — the movie was not received well by critics.

The appearance of Starr and exclusion of George Harrison wasn't intentional on McCartney's part, though he admits he never even asked the Quiet Beatle if he was interested.

"No, I didn't actually," remarks McCartney on whether he considered including Harrison. "George was out of the country for that year... tell you the truth, I know George wouldn't have wanted to do it."

McCartney continued to describe Harrison's feelings toward appearing in movies, saying, "George doesn't really have any aspirations in acting, I don't think," he says. "He never really did in the old movies... he was the least keen of us to do some acting."

"I didn't exclude him on purpose because I hate him or anything," McCartney would add. "I know he wouldn't have done it and he was out of the country."

Harrison showed some interest in film during his lifetime. Harrison setup HandMade Films and used £3 million of his own money to fund Monty Python's Life of Brian; without his help, the movie would not have been made. Harrison even makes n uncredited appearance in the film as Mr. Papadopoulos.

Listen to Scott Muni's full interview with Paul McCartney below, where he discusses his favorite song from the Beatles catalogue, excluding Harrison from Give My Regards to Broad Street, as well as recording with a drunk Pete Townshend, his love for Fred Astaire and much more.