NEW YORK (CBS 2/WCBS 880/1010 WINS) -- There was a possible resolution in the works in the debate surrounding the proposed mosque and Islamic cultural center near ground zero.

It looks as if the developers of the mosque may be willing to budge and move away from the Park 51 location where they originally planned the construction, CBS 2's Marcia Kramer reports.

So will the mosque be moving?

New York Gov. David Paterson plans to meet with developers of the controversial Ground Zero mosque as early as this week to offer them state land – at another location – for their cultural and religious center. Paterson told Congressman Peter King about the meeting, and King said the governor asked him to make it public.

"The purpose of the meeting would be for the governor to discuss with the leaders of the mosque where state property is available," said Rep. King. "Whether or not people from the mosque would be willing to consider that property."

King added that the governor "seemed very enthused" about the anticipated discussions.

For at least a week, the governor's message to the developers has been one of hopeful understanding.

"I hope that the type of cultural understanding that they're trying to promote when they build the center could be practiced right now," Paterson said.

Sources tell CBS 2's Kramer that Gov. Paterson is concerned that Mayor Mike Bloomberg, a staunch supporter of putting the mosque at ground zero, and President Barack Obama, might be advising mosque leaders to dig in their heels and insist on the present location.

But there was a glimmer of hope that they are open to a compromise. 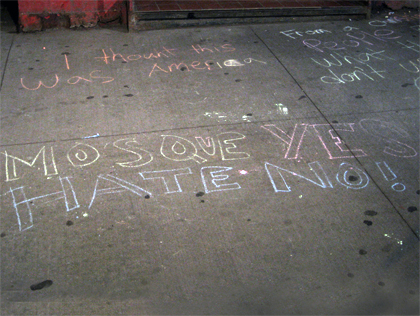 "For the past week, we have focused on trying to respond to attacks and detractors of our project. What's become clear is – they won't listen."

Paterson's office confirmed that discussions between his staff and the developer's staff have been ongoing and said the governor expects to have a meeting scheduled in the near future.

Congressman King said the openness of the developers to a compromise will be the real test of their intentions.

"If the leaders of the mosque take up the governor on his proposal, it would show that their real intention is to bring people together, build bridges," he said. "And not just make a political statement by having a mosque at Ground Zero."

There's also the issue of separation of church and state, and whether the governor should provide state land for a mosque.

King said in this case it would be okay, especially if the compromise meets the need of both sides.

As for the debate over the mosque in its current proposed location, religious leaders said Monday they are worried this one building is leading to a nationwide backlash.

It is the question Muslim leaders and those of other faiths are asking.

"How far is too close? If two blocks near the Burlington factory is too close is that far enough?" said Mahdi Bray, the executive director of Muslim American Society Freedom.

Former New York City Mayor Ed Koch spoke with WCBS 880's Rich Lamb and defended the right to build the Islamic cultural center saying that the Constitution provides that where you can build a church or a synagogue, you can build a mosque.

But, says Koch, "I also believe that most people, myself included would think it's insensitive to build a mosque so close to the 9/11 catastrophe."

Koch added that if the people building the mosque don't think it's insensitive, then the government has an obligation to protect their rights.

Officials said the ground zero mosque controversy is just one of many attempts to prevent mosques from being built all over the country, and that it may have emboldened other protestors.

Protests have been held on Staten Island, and California, and Tennessee, Wisconsin, Alabama and Florida.

"The building of mosques and the resistance from the buildings of mosques has increased throughout America as well as the destruction and vandalizing of mosque, including a pipe bomb placed in a mosque in Florida," Bray said.

Leaders of other faiths joined the Muslins American Society Freedom on Tuesday.

"I know how I would feel if people started saying there were certain places you weren't allowed to put up a synagogue and therefore I know what should not be done to people who want to put up a cultural center which will include a prayer space," said Rabbi Aurthus Waskow, the director of the Shalom Center in Philadelphia.

Signs of support were also seen Wednesday morning at the proposed site for the mosque on Park Place. Defenders of the Islamic cultural center wrote out in sidewalk chalk, "I thought this was America" and "Mosque Yes, Hate No."

But on Tuesday at ground zero many said they were opposed to putting the mosque so close to where the 9/11 attacks took place. They are not against mosque construction in other parts of the city.

"It's the location, yeah, this is holy ground. A lot of people died here," said Steven Van Cook of Queens.

"My objection is ground zero. This is a holy place. It should remain as a holy place," added Steven Goldberg of Bayside.

What about building it in another place in Manhattan?

"No, I wouldn't mind because you know it's freedom of speech in the country, but I object to it being here," Goldberg said.

When asked is he is opposed to the location or the building mosques in New York City, Vito Serzelczyk of Marlton, N.J., said, "Location, location, location. This is a very sensitive area. I was here on Sept. 11. It was a terrible, tragic event and I feel sorry for the families of those people, victims, and this is not really the place to build a mosque."