It was the modern day Freaky Friday. Only instead of switching real identities, Sara and her teenage daughter switched online identities.

When Sara [not her real name] upgraded her phone, she gave her old one to her teenage daughter. For about a week, each one received the other's messages and social media notifications.

"People just want pictures," Sara said. "They want naked shots and I guess you would call it sexting...I just feel my kid is too young for that and I don't want her involved in that."

MORE: Social Media's Impact | In Their Own Words | Social Media And Your Brain | Sex And Social Media | Cyberbullying | Surgery For Selfies | Join The #IDecide Movement

It was an eye-opening accident.

To shield her daughter, Angie [not her real name], from some of this material, she deleted the Snapchat app from the teen's phone.

"She can't put it on now [Snapchat] with the controls I have there," Sara said. "At least for the moment she can't get it. But I would ask any parent. What do you think the kids are doing with Snapchat? With photos that are supposed to disappear...let your mind go to all the worst possibilities. That's what's happening."

It's not just the sexual exchanges on social media that leave Sara feeling uneasy. It's the relationship that her 15-year-old daughter has with her phone. She says the constant checking of messages and fascination with 'likes' occupies much of Angie's time.

She says it seems Angie is addicted to her phone and it makes her concerned about how the continuous notifications affect her daughter's ability to concentrate.

"I see the struggles she [Angie] makes," Sara said. "I see a two hour homework assignment turn into a six hour marathon with tears at the end of the evening because she can't manage her own impulses toward the technology." 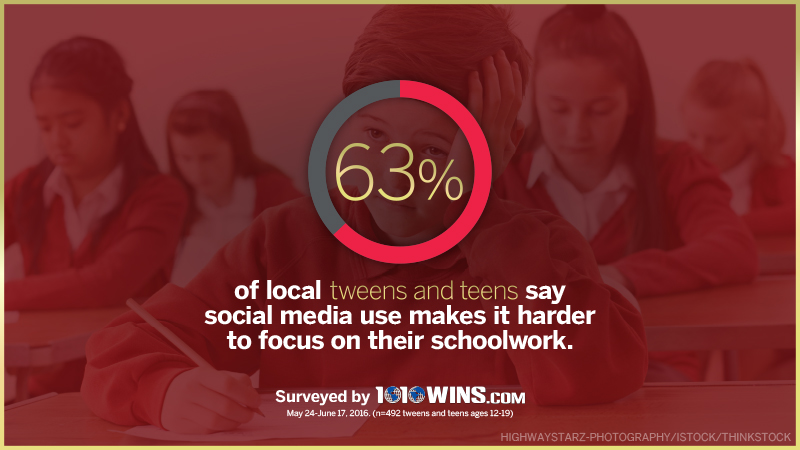 Sara is not the only parent worried about the way in which technology is impacting her child. According to a 2015 report published by the Pew Research Center, "33 percent of parents [surveyed] said they have had concerns or questions about their child's technology use in the past 12 months."

WEB EXTRA: Find out why Dr. Jennifer Powell-Lunder, a clinical psychologist who specializes in social media's impact on teens and tweens, says there is a reason that many parents have such a hard time handling, and relating to, their children's social media use.

Three years ago Sara turned to WebCurfew as part of an effort to control some of her daughter's social media use. WebCurfew acts as an Internet "on/off" switch, allowing the user to shut down Internet connection to any, or all, devices. That could include Angie's phone.

"If I didn't have it [WebCurfew], I would have to engage in a lot more physical wrestling of the devices themselves...any parent who has wrestled with their teenager to get control of a device knows what I'm talking about," Sara said.

WebCurfew Founder and CEO, Rod da Silva, spoke to 1010WINS.com about the technology that many parents are using to curb social media use at home.

Sara says she is "at war with Silicon Valley for her daughter's brain," and is calling for further action to be taken to protect Angie.

"They [Silicon Valley] are the ones who need to change and if they're not going to do it voluntarily with more serious corporate responsibility, then they [lawmakers] need to do it through legislation," she said.

Although there can be some negative consequences to using social media, the same 2015 report published by the Pew Research Center found that, as illustrated in the chart below, social media can also be helpful to parents.

Perhaps some parents could relate after this video went viral last year. In the video, which is several minutes in length, Valerie Starks can be seen publicly berating her 13-year-old daughter, Krystiauna, for creating a fake persona on Facebook. She forces her daughter to clear up some of the false information she had posted online.

"So you're 13, we have established in the last few seconds that you're not a freak, that you don't sit at home with a bra on, you don't wear makeup, you don't take pictures like that," Starks says to her daughter in the video.

1010WINS.com reached out to Starks to see if she felt the video was effective.

"It has had a huge impact on my daughter," Starks said. "She is working this summer in a youth program and in the fall will be a freshman in high school. Her grade point average is currently a 3.7."

She says Krystiauna is not allowed to use any social media platforms, and to the best of her knowledge, she has followed that rule. Although it is a few years away, Starks says her daughter has aspirations of attending Harvard University to study law.