NEW YORK (CBSNewYork) -- Pro-Palestinian NYU students, belonging to the group NYU Students for Justice in Palestine,  slipped bogus "eviction notices" under the doors of up to 2,000 undergrads Thursday. Several Jewish NYU students say it was an attempt to intimidate them.

As WCBS 880's Marla Diamond reported, the leaflets, distributed by NYU's Students for Justice in Palestine, were placed under doors at Palladium Hall, which has a Sabbath elevator serving Jewish students. The notices read: "We regret to inform you that your suite is scheduled for demolition in three days."

The flyers referenced Israel's controversial practice of demolishing Palestinian homes and indicated at the bottom, "This is not a real eviction notice."

Many Jewish students live in those two dorms, but the notices did not go to them exclusively.
"Eviction notices are routinely given to Palestinian families living under Israel occupation for no other reason than their ethnicity," the flyers say. "Forced evictions are arbitrary, racist, humiliating, and in violation of Article 53 of the Fourth Geneva Convention."

The leaflet acknowledges at the bottom that "THIS IS NOT A REAL EVICTION NOTICE."

Laura Adkins, a member of NYU's Pro-Israel advocacy group TorchPac, said the notices are an example of freedom of speech taken too far.

"It's pretty alarming to a lot of students," she said, adding that similar incidents have happened at Rutgers and Northwestern universities. "Also then coupled with pictures of SJP students holding knives," she said. 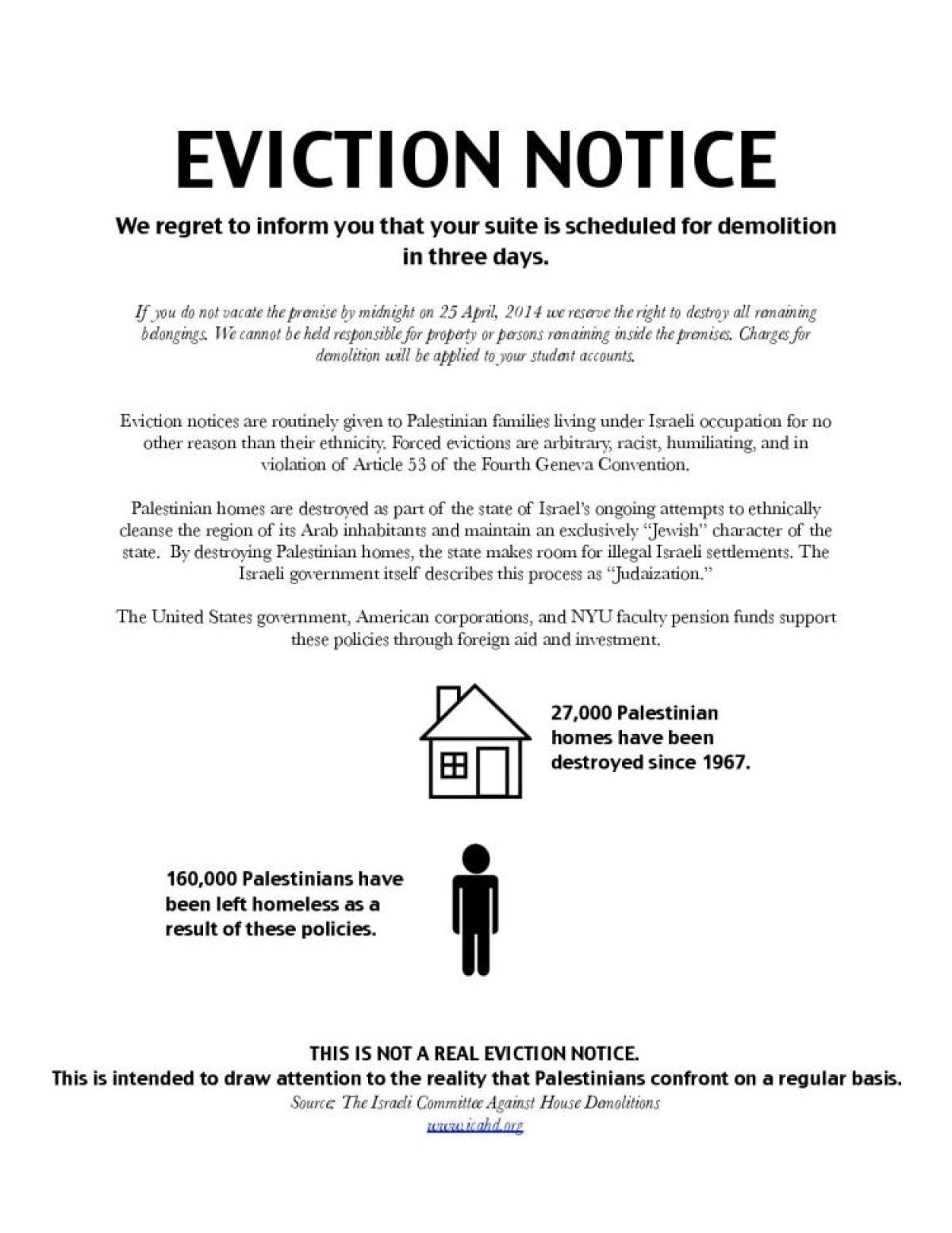 Students for Justice in Palestine released a statement Thursday evening acknowledging they distributed the notices to 2,000 students, but insisting they did not target Jewish students.

"Accusations leveled against SJP claimed that the action targeted Jewish students; this is erroneous and no objective evidence has been cited to support these allegations," the statement said. "In reality, nothing could be further from the truth. At its very core, SJP is a group opposed to ethnic discrimination and institutionalized racism. Racism is not limited to the practices of the Israeli government, and opposing policies and racist rhetoric, including anti-Semitism, is vital."

Unauthorized leafleting is a violation of NYU policy, Diamond reported.

In a statement released Thursday evening, NYU spokesman John Beckman said the school's Residence Life and Housing Office will look into the matter.

"NYU encourages free speech and the free exchange of ideas, but our hope is that the discourse -- including debate on controversial issues -- will be conducted maturely and in a way meant to elicit thoughtful discussion rather than simply provoke," Beckman said. "A flyer titled 'eviction notice' anonymously slipped under doors at night is not an invitation to thoughtful, open discussion; it is disappointingly inconsistent with standards we expect to prevail in a scholarly community."

Beckman said flyers were distributed at a second dorm, but it was not clear where that was. He said that school officials "don't believe there is a perception of them as being home to a larger presence of Jewish students.

"However, were it to be the case that the leafleting was done in these locations because either of them were perceived be a dorm with a higher proportion of Jewish students, that would be troubling, dismaying, and a matter of deep concern for our community," Beckman added.