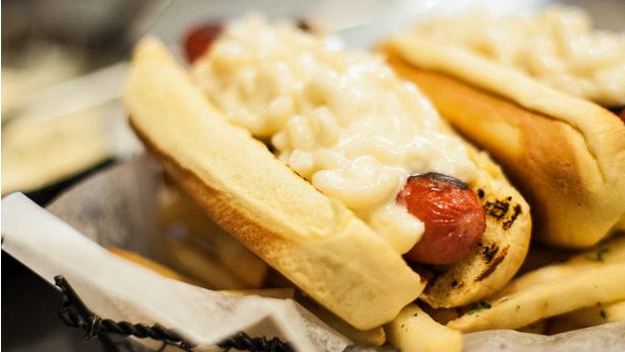 Although hot dogs (aka frankfurters) likely first came on the scene in some version in 13th century Germany, many still associate them with New York City summers. These days we've entered into a golden age of putting tubular meat in buns, and the restaurants/vendors below serve some of the city's best, most creative versions. By Jessica Allen.

Asiadog puts Asian-inspired toppings on its chicken, veggie, and beef dogs. Not only are the owners commenting on the diversity of the city, but they're also producing some gosh darn good eats. The "mash," for example, is a chicken hot dog blanketed in sweet and spicy ketchup, jalapeno mustard, and crushed salt-and-pepper potato chips. So good, so so so so good. Get a side of Korean yam fries with kimchi aioli and a fresh-squeezed limeade, and there's a perfect summer meal. (Asiadogs are available at various locations around town, including KBH Bierhalle.)

They're all about the customization at Crif Dogs, including the "good morning dog," with bacon, melted cheese and a fried egg -- or the "john john deragon dog," with cream cheese, scallions, and everything bagel seeds. If you'd rather design your own, you must first choose the type of dog: the smoked beef-and-pork "Crif dog," the all-beef "New Yorker," or a veggie dog. Then add toppings like avocado, ham, baked beans, pineapple and lettuce. FYI: "Crif" is the sound of one of the original owner's names (Chris) being said while eating a hot dog.

Ditch Plains, for those of you who don't know, is a beloved surfing spot in Montauk. It's also a fish shack and oyster bar in the West Village, serving easy, American comfort foods as deviled eggs, watermelon salad, shrimp tacos, and pigs in a blanket. Speaking of pigs and blankets, Ditch Plains offers a few variations on the humble hot dog, including one that comes topped with mac and cheese. The spicy dog has pico de gallo and aioli made with Sriracha, while the sloppy dog gets a liberal covering of Sloppy Joe mix. Go ahead and order some fries and a beer or Bloody Mary too.

The hot dogs at Katz's are as unfussy and as filling as everything else at this old school kosher-style delicatessen on the Lower East Side. (How "old school," you ask? Very. This deli has been around in one form or another since the 1880s. You may also recall the deli's cameo in When Harry Met Sally.) Your all-beef hot dog, flavored with paprika, salt and garlic, boasts a firm all-natural casing, slathered in sauerkraut and mustard. Round out your dog with a side of matzo ball soup, steak fries, potato latkes, a fistful of pickles, and a frothy New York egg cream.

More than 25 years ago, the first Rosie's Food Truck was built by a sheet metal mechanic so his wife could sell burgers, coffee and dogs to factory workers in Williamsburg. Today the neighborhood, like the menu, has changed a whole bunch, and the latter now includes flautas, wraps, pancakes, French toast, and even soy chorizo from a state-of-the-art truck. But the great dogs (at super-affordable prices) and friendly service remain. Try the famous "Chiwawa dog," a hot dog loaded with crema, cheese, tomatoes, cilantro, and salsa verde.

Santa Salsa seeks to bring a little bit of Venezuela to NYC. The "perro con todo" is a 100 percent kosher beef hot dog smothered in cabbage, crushed potato chips, cheddar cheese, Santa Salsa (housemade sweet corn sauce), ketchup, mustard and onions. The "pan con queso" is a chunk of Venezuelan cheese with an assortment of toppings served in a hot dog bun. There's also a veggie option made from carrots. These dogs are available at the Over the Eight bar or seasonally at Rockaway Beach and Smorgasburg.