New York City bartenders are known for being on the cutting edge of the cocktail craft. So why are you wearing out the stools at the same old watering holes? From intimate nooks to roaring pubs, visit these bars opened in recent months for a taste of NYC's freshest drinks and newest liquid trends. By Selena Ricks-Good.

The Dead Rabbit Grocery and Grog

More: The 5 Best Cocktail Bars In The Financial District

New York is chock-full of speakeasies these days, but The Dead Rabbit harkens back to an even earlier period, reinterpreting tipples from the 19th century. On the main floor, a traditional tavern evoking New York's immigrant past serves classic drinks and craft beer, while upstairs, a more genteel lounge offers seated service. The handsome cocktail menu--in booklet form--features more than 72 mixed drinks, from fixes and daisies to juleps and cobblers, all painstakingly researched. History never tasted so good.

Who better to open a hot NYC cocktail bar than some of the city's own top bartenders? Opened by Alchemy Consulting, otherwise known as  Joaquín Simó (Tales of the Cocktail American Bartender of the Year, 2012), Toby Maloney (ICC Chef Presenter, 2011), Troy Sidle and Jason Cott, Pouring Ribbons offers a powerhouse of talent behind the stick. Located above a liquor store, the cocktail den offers a refreshing dose of unpretentiousness--the room's decor makes no reference to the vintage speakeasy trend. Instead, the focus is on the guest experience, with a cocktail menu broken down by two scales: refreshing to spirituous (strong) and comforting to adventurous. Feeling adventurous? Try the Closing Bell (Appelton Reserve Rum, Palo Cortado Peninsula Sherry, Batavia Arrack and Green Chartreuse), which also happens to be quite spirituous. 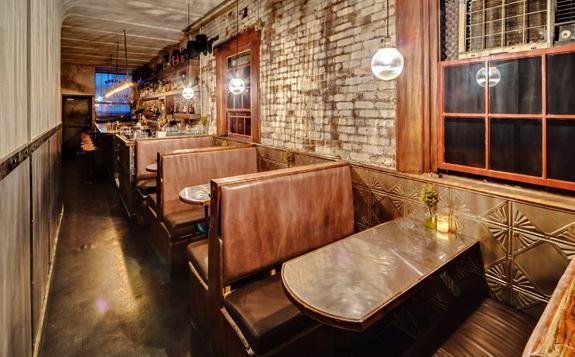 Continuing on the bartender-turned-bar owner trend, Attaboy (formerly Milk & Honey) was recently opened by Sam Ross and Michael McIlroy, both veterans of--you guessed it--Milk & Honey. Once a catalyst for NYC's speakeasy craze, the bar is much more laid back under Ross and McIlroy while still offering top-notch drinks made on request (no menu). While there's still no sign and guests must be buzzed in, they won't need a reservation. Inside they'll find a bar top that's doubled in length -- with brighter lighting and louder music.

Another addition to Alphabet City's bustling cocktail scene is Evelyn Drinkery, a cozy haunt featuring a spacious back room. The drink menu is divided into categories including "spiked phosphates" (otherwise known as boozy, tart housemade sodas), egg creams, long drinks, house cocktails and twisted classics. Daily punches and craft beer round out the liquid offerings. Coming here for a date? Try the NYC Cream (cacao milk, Santa Teresa 1796, chocolate syrup and seltzer), served with two metal straws and meant to be sipped in a matter of minutes, before the fizz settles.

Cocktail culture has arrived in Prospect Heights--the nabe now has two cocktail bars, with the opening of Tooker Alley joining Weather Up. Around the corner from the Brooklyn Museum, Tooker Alley welcomes a diverse crowd with offerings ranging from classic cocktails and martinis to beer and shot pairings. Owner Del Pedro is a veteran bartender from Pegu Club, but rather than put the drink program on a pedestal, the vibe here is relaxed, bohemian and fun. One of the most popular drinks is the Hobo Julep (Wild Turkey 101, cane syrup, mint bitters, crushed ice and club soda).